You are here: Home / Boat Repairs & Upgrades / Selecting and Installing a Fishfinder 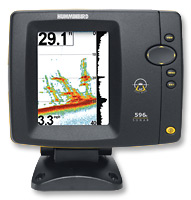 We chose the Humminbird 586c model. The color screen is not merely prettier than a monochrome, but is brighter and easier to see in Florida's summer sun.

We decided to install a fishfinder on our 15' Boston Whaler and use the boat for more fishing trips around Charlotte Harbor. My last experience with fishfinder/depthfinder technology was long ago, and I had no idea of the current state of technology nor the prices. I had recently seen a very modern side scanning sonar and a sophisticated color fishfinder/GPS in operation on a friend's boat, and was very impressed, but I knew we were not buying a $2,000 side scanner for the Whaler.

I started my search by looking in fishing discussion forums such as the Florida Sportsman forum. The consensus of opinions I gathered was that among the less expensive units, Humminbird and Lowrance fishfinders had the best bang for the buck. Several also seemed happy with the Eagle fishfinders. I was surprised that some people did not think highly of the Garmin units, as I have always been a fan of their GPS products. I guess they are not as good at fishfinders. Some of the high tech fishermen seem to prefer the Furuno fishfinders.

I set a budget limit of $400 for this upgrade, and found several fishfinders below that price that seemed adequate. My "panel of experts" on the internet seemed focused on dual beam sonars, and on a minimum power output of 2,000w peak to peak, so I was eliminating any that did not meet those criteria. I was undecided between a monochrome or color display, so I picked a couple of each type from both Humminbird and Lowrance as finalists in the selection process. I liked the Lowrance X135, the Lowrance X67C, Humminbird 565, and the Humminbird 586c. I also wanted to take a look at the Eagle FishEasy 350C and the Eagle 480.

To finish the process, I wanted to go and actually see the various units, work the controls, and look at the quality of the displays. My wife and I went down to Bass Pro Shops, which is a wonderland for outdoors enthusiasts. It was hard to focus my attention in that store; so many goodies to lust after! The sales guy at the electronics counter was friendly and let us poke and prod the various fishfinders. It was immediately apparent to both of us that the color display was not just prettier, it was a lot brighter and more readable than the monochrome LCD display. We quickly settled on the Humminbird 586c as the unit for us. We also picked up a Garmin Oregon handheld color GPS chartplotter while we were there, along with a few other odds and ends. We managed to escape without buying a nice fixed mount color GPS chartplotter and everything else in the store.

Installation of the fishfinder was pretty simple. The base has to be mounted to the console and wires routed through the bottom of it. One wire has to carry power to the unit; the other wire leads to the depth/temperature transducer, which will be mounted on the transom. Not a big project, and it should only take a few hours. Should, that is, for normal people who lead standard lives. In my case, it's always a bit more complicated somehow.

I began with the transducer, which the instructions said must be mounted at least 15" away from the engine. I assume that requirement is so that the 60-degree secondary beam does not experience interference from the engine. On our boat, 15" turned out to be a bad distance because of the shape of the hull and the way the boat rides. There is a curve in the transom right at 15" from centerline, and the unit would have to be mounted further out. My concern was that if it were placed more than 15" from the centerline of the boat, the transducer would get a lot of turbulence off the hull strakes, and it would frequently be out of the water at cruise speeds. I decided to trim the minimum distance down to 14", which was workable on our boat. 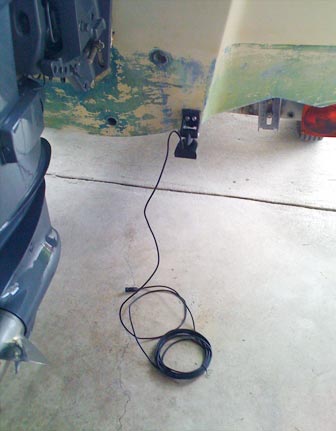 Next came the vertical positioning of the transducer. It needs to ride in clean, undisturbed water coming off the bottom of the hull, so it should be a bit below the plane of the hull. The bracket is made to allow for some vertical adjustment for fine-tuning of the correct height. As I later learned, if it is too deep, it creates a lot of spray. If it is not deep enough, it will be blind at planing speeds. On my first couple of attempts, I got it a bit too low, and at planing speeds it would send a roostertail gushing at the side of the engine. I was afraid to try really high speeds, for fear I would tear it off.The picture at right shows my first attempt at positioning the transom mounted transducer. 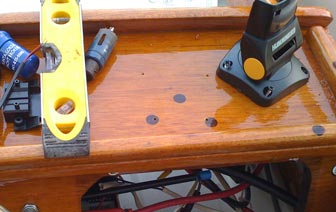 With the transducer in position, I ran the wire up to the console and also put a fuse in the power supply wire and connected it to the battery. The next part was going to be a bit hard: I had to drill some holes in my beautiful mahogany console. I found that I could use the base to cover up holes in the console that the previous owner had made, and that I had patched using mahogany dowels. The dowel patches turned out to be a poor match, but luckily I was able to line up the fishfinder mounting base so that it completely covers that area. This picture shows the 4 holes drilled for the mounting base screws: 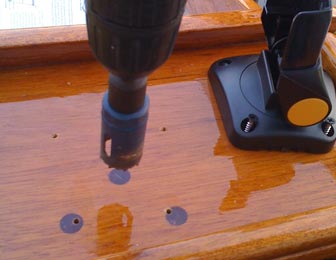 That part wasn't so bad. Just little holes, and two of them going through previous patches, so it could be easily reversed if I wanted to do so. The next hole took me a little time to work up my nerve. The instructions called for a 1" hole centered beneath the base. The good news was that the hole would completely remove one of my old patches. The bad news was that I would now have a 1" hole in the top of the console! Do I really, really want to do this? 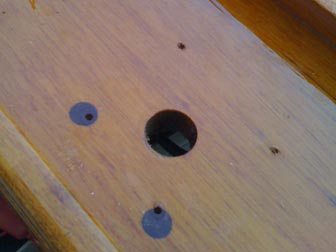 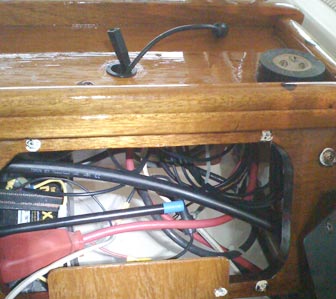 At this point, I was literally moments from plugging in the wires, screwing down the base, and being done with the job, but I couldn't do that, of course. I had just made a fresh hole through the console, and I knew it was a pathway that water would eventually find. Rot would start eating the console. I decided to slop some varnish around in the hole to seal it. Of course, one coat of varnish doesn't really seal anything, so I had to let that one dry for a day and then sand a bit and put on another coat. Once that one was dry, I put in the little plastic grommet to line the hole and ran the wires up through it. 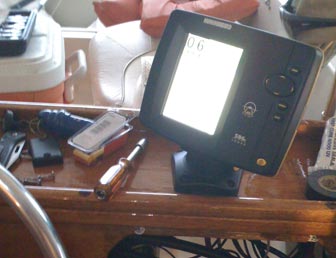 At last, I had the fishfinder installed and powered it up: 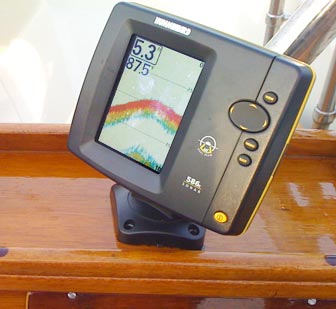 Here's a picture of the new fishfinder in operation during a cocktail cruise.

Success! We took the boat out and the fishfinder worked very well, and it was bright and easy to see in the sun. It was interesting learning some of the uncharted depths of the creeks, where I have been boating for years knowing only that some water is too shallow, other parts deep enough, but never knowing just how deep those "deep enough" places were. Unfortunately, the transducer was mounted too low on the transom of the boat, and the water thrown off it was hitting the engine very hard. It is made to be adjustable, with vertical channels in the mounting plate to slide the bracket up and down. The problem was, I had mounted the plate so far down that even with the bracket slid to the tops of the channels, it was still too low, as another test ride revealed.

I had to patch the holes I had just drilled in the transom and move the whole assembly up and over a little bit before I finally got the transducer at the correct height. When underway at high speed, it still reads acceptably well, and it doesn't throw off much spray any more. It does have one unexpected performance characteristic: when turning the boat to starboard, I figured that the transducer would be deeper in the water and would read better, and when turning to port I thought that it would be mostly out of the water and would not read reliably, if at all. It turns out that a turn to port does not affect the unit much at all, but a turn to starboard, even in calm water, blinds the transducer completely. It must be turbulence from some part of the hull that gets directed underneath the transducer during a high speed turn to starboard.

I'm very happy with the new fishfinder, and though it has not yet found me a fish to eat for dinner, it has made our little journeys around familiar waters more interesting, showing depths I did not know about and beeping when it sees a fish below.