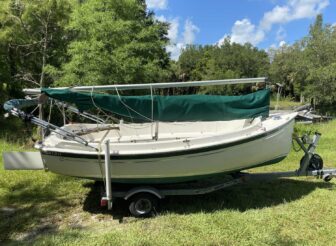 We had a lot of fun with our Com-Pac Sun Cat and I missed owning it but also came to realize that the Sun Cat was really more boat than we were using. One of my Rules of Boating is that the smallest, simplest boat that will do what you want to do is always going to have the best work to play ratio. I had sailed a Picnic Cat once while working for Gulf Island Sails and knew I would enjoy having one.

I contacted former Sun Cat National Champion Scott W to talk Picnic Cats because I knew he had owned one for a while. Turned out, he had been thinking of selling the boat and made me a good offer and pretty soon we had a new-to-us 2008 Picnic Cat! 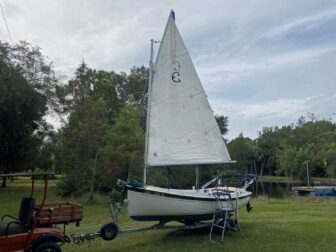 I barely looked at the boat before buying it, since I knew that Scott had been using and upgrading it. There were only a couple of things that I knew I wanted to change. First was the 5 hp Tohatsu outboard. We had one on the Sun Cat, which weighs more than twice as much as a Picnic Cat, and it was more than enough. Putting one on a Picnic Cat seemed over the top to me. I looked into electric outboards and wound up ordering an ePropulsion Spirit. I'm glad I ordered it in July, as I'm writing this at the end of October and the new motor only arrived in Miami yesterday and should get to me next week.

Scott had been moving toward a plan to use the Picnic Cat in the Watertribe Everglades Challenge. By my count, that's his third-craziest boat choice for that event, so a more or less normal idea coming from him. As part of that plan, he had a very deep second reef point installed in the sail. I took the boat for a yard sail to check out the reefing and sail handling setup. 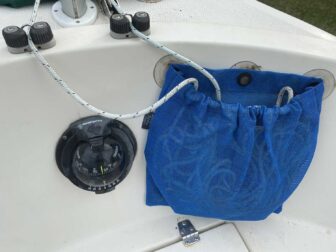 The halyard blocks on the gaff boom had been upgraded from the factory ones, which is nice, but there was a 2:1 purchase added to the throat halyard. I saw no need for it and removed that part. Other than that, the two halyards on a Picnic Cat come with turning blocks on the mast and cam cleats on the coaming and a line bag had already been added to the boat, along with a bulkhead compass. 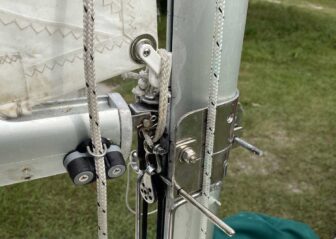 I'm not sure how the clew of the sail is supposed to be secured but I'm pretty sure this is not it. It does work, however. Also shown is my favorite improper use of the enigmatic "long pin" that is a feature of all Com-Pac catboat folding masts. The long pin is supposed to be inserted above the gaff boom when the sail is fully lowered and the mast is about to be folded. If you fold the mast with that gaff boom fitting in the hinge, the results are unfortunate.

I don't use it that way. I put it through the downhaul block, securing the boom above the cockpit. It's just convenient when raising or lowering the sail to not have it drop all the way down. If I want to tension the luff for better sail shape, I have to remove the pin. I seldom care enough to do this. I can get sufficient tension along the luff with the throat halyard.

Also in this pic is the cam cleat I installed to quickly secure the tack reef. If I want to employ the second reef point, it would be necessary to drop the sail and re-thread the reefing line. I hope to never use that reef point. 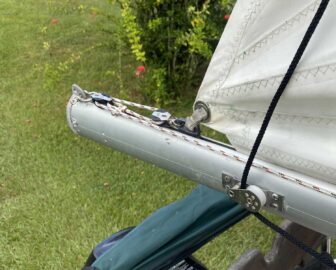 I had some tiny blocks left over from when I put a jib on my Adventure Island so I made a new outhaul for the Picnic Cat. It's led to a jam cleat further up the boom, easily within reach when sailing. 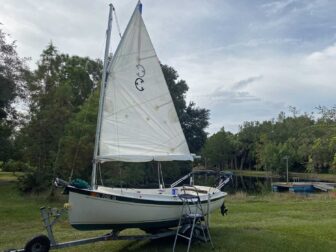 I wanted to try reefing in calm conditions in my yard before I had to use the reefing system on the water. The picture at left shows the sail with the first reef tied. I might have to release the long pin and pull the outhaul to get the speed wrinkles out of the middle of the sail, but it looks like it can work. 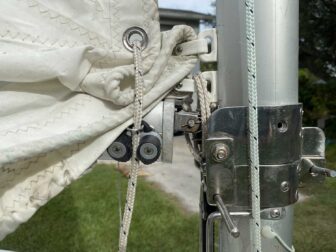 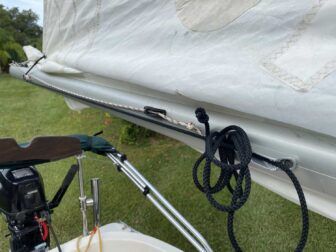 The clew reef jam cleat. Also shown: the jam cleat for the outhaul. 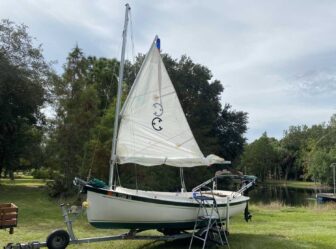 All I can say is, if I'm ever using this reef point it's because things have gone horribly wrong with whatever I was planning and I'm trying to survive and bring the boat home. 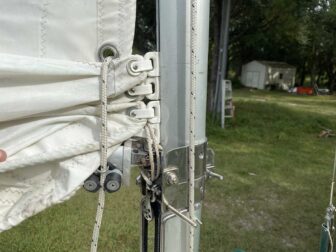 The tack reef has quite a stack underneath the reefing line. 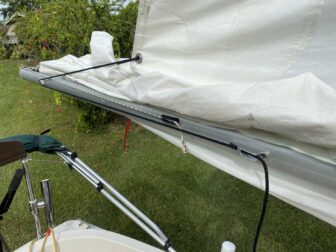 The clew reef has quite a mess behind it too, but I'm pretty sure that if things went so wrong that I needed this second reef point, I could use it. 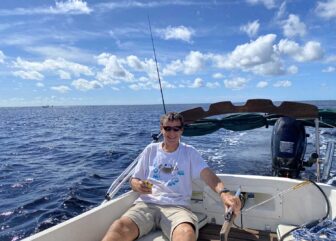 Satisfied with the rig, we took the boat out for a sail on Charlotte Harbor. It was a beautiful day with a nice breeze, just right for testing out the new rod holders and trolling along the shore a little bit. No fish, but we felt lucky anyway. Might have been the banana.