What Sailors Do When They Can't Sail A Real Boat 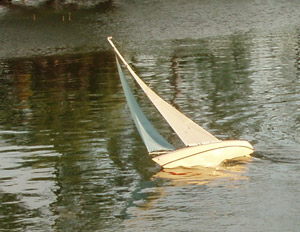 You can see the hole the keel is digging in the water as the boat tries to accelerate on her side. Lots of wasted energy. 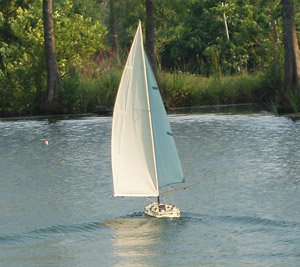 The sailboat is funny going downwind 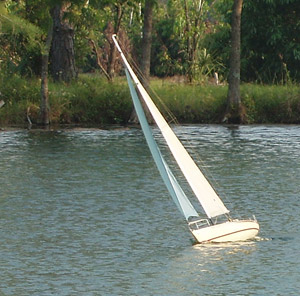 Here the boat is trimmed in hard and beating upwind from the fishing bobber mark. 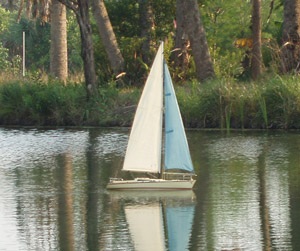 That is, until I encounter the ever-shifting doldrums and come to a stop, as in this picture. 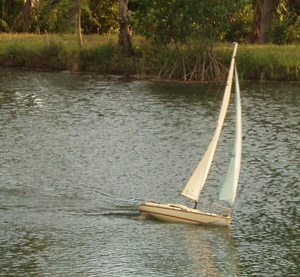 Note in this picture the bow wave riding up the hull and the fact that the stern is almost completely out of the water. 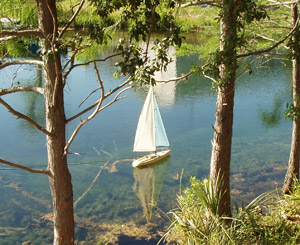 One last remote control sailboat picture, taken from above as the boat sneaks through some underwater obstacles looking for the strong curtain of wind that sometimes hugs the shore.

Sailing gets exciting when the winds pick up, but at some point, I don't want that much excitement. I don't want anyone to get hurt, and I don't want to break any equipment, blow out any blocks, part any lines, or rip any sails.Still, as I watch gusts too strong to actually want to take out a sailboat, I can't fully suppress the urge to go sailing. My solution: I put my little remote controlled sailboat through the wringer whenever the wind is blowing too hard for real sailing. I have a Fairwind 900, made by Kyosho. It looks kind of like a Hobie 30 when it's in the water. Sending it out in strong winds carrying too much sail just makes me laugh as I bury the rail upwind and throw a titanic wake ripping along downwind wing on wing. It is fun to try to control the boat as it gets thrown around and knocked down by the wind.

I sail my remote-control sailboat on a small pond with lots of trees around, so even when winds aren't that strong, they are usually turbulent and irregular on the surface of the pond. Once, as I was sailing along in a period of relative calm, the boat was suddenly knocked down to port and then almost immediately knocked down to starboard by gusts that I did not even see coming across the surface. Needless to say, it makes it a bit hard to trim the sails, but it does make for some interesting sailing.

In the first picture, I have just sailed up out of the stripe of calm winds running across the pond — my miniature version of the doldrums. The wind hit the sails, and the crew failed to momentarily ease the sheets during acceleration, and the vessel was knocked over very hard. You can see the hole the keel is digging in the water as the boat tries to accelerate on her side. Lots of wasted energy.

The problem is, I always want to sail the boat hard, with too much sail for the winds, so that I can get through those doldrums. If I ease the sheets a bit with the remote control when heading into the stronger gusts, the servo lacks the power to pull them back in. I have to head up, luff the sails a bit to relieve the strain on them, sheet in, then fall back off.

The little boat loves to sail wing on wing, and is very fast. It makes me wonder about those theoretical hull speed calculations for displacement vessel hulls. The boat certainly seems to be going faster than the 1.9 knots or so that the standard formula indicates. The formula is based on the speed of the waves created by the boat, and that speed increases as wavelength increases.

Take a look at the wake that boat is dragging along in the second picture. It is completely obscuring the stern of the boat. I like to imagine ripping along on a real sailboat, being followed by a dumptruck-sized wake.

In the picture, the fishing bobber is my downwind race mark, and when I snap the boat around it and sheet in for the climb back upwind, the boat pitches violently upon encountering her own wake. More remote control sailing comedy that you can't get in a full size boat.

You never know when a wind shift will turn a hard beat upwind into a fast close reach along the edge of the doldrums. Note in the next picture the bow wave riding up the hull and the fact that the stern is almost completely out of the water. When my sail servo needs to be replaced, I plan to solve the wimpy servo problem and the tendency of the boat plow her nose in strong winds by upgrading to a stronger remote control servo and putting a double battery pack in the stern of the boat.

In the picture that shows the boat from an angle as she sails wing on wing in a moderate breeze, you can see that even in that breeze the bow is a little low. Sometimes when I am doing this, a strong gust comes along and completely buries the bow, punching it into the water nearly up to the mast! As the rudder comes out of the water, the stern flops around downwind in one direction or the other and the boat comes back up, soggy jib flogging and fluttering in the breeze.

I think that if it were possible to dismast this boat in a breeze, I would go through masts like toothpicks. My mast has only broken once, at the sleeve, and that was during an unfortunate encounter with a thunderstorm-terrorized greyhound.