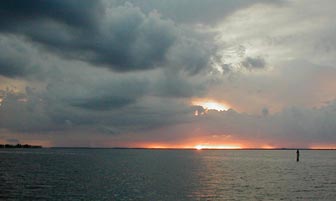 When you're out in a boat, a nice day can turn ugly and wretched awfully fast

Boating Can Be Miserable When You Get Caught in a Thunderstorm

One fine summer morning when I was a teen, I took off in our 15 Whaler with my girlfriend and my oldest friend. Biscayne Bay was nearly flat and we ran down to Eliot Key to ski and swim. After lunch, my friend made himself scarce for a while, taking a walk out on one of the flats. Or somewhere. He could have burst into flames, and we probably wouldn't have noticed. I had seen a little thunderstorm developing over the land, but who cared about that? Not a teenage boy alone on a boat with his girlfriend, I can tell you that.

That is, until the first puff of cool wind hit, coming out of the west, and I saw my friend walking briskly across the flat towards the boat. I did not notice as the storm grew from a little lump over Homestead to a huge line extending several miles north, all of it coming our way. It was maybe halfway across Biscayne Bay, and it was still growing. We tied everything down for a high speed run home, hoping to run around the north edge of the storm before it could get us. That might have been possible in a boat that went 90 mph, but for us, it soon became apparent that it wasn't happening.

The west wind had blown up quite a chop as we rounded Sands Key, and it looked bad to our left. Black clouds with lots of lightning. I briefly considered holing up at Boca Chita Key until the line passed, but decided the storm looked better to the north, and I'd rather encounter that part of the storm out on the flats. What a stupid decision.

I knew how to pick my way along the edge of the shallow waters extending from our location up to Key Biscayne by looking at the color of the water. In the prevailing east and southeast winds, hugging the flats means riding in calm water. With the wind out of the west, I had to stay up in very shallow water to avoid the chop.

As we approached the flats off Soldier Key, the leading edge of the storm hit. The rain wasn't as heavy as some storms I've encountered, but the lightning was intense. I was blinded by the cold rain whipping into my face at high speed, and lightning was coming down all around the boat. A few bolts hit very close, and it was incredible to see. It looked white with a pinkish hue, and we could feel the simultaneous BOOM through our whole bodies. One hit less than 100 feet to starboard, and I thought for a moment that if I had to get blown up, at least I got in a good last day out boating with my friend and my girlfriend.

I was trying to find the deeper water, but the usual colors were blurred by the chop, the gusty winds, and the rain. I left a few prop scars in the flats as I got too close, but never slowed down. The others were covered with towels and ducking to avoid the rain, but still they were freezing. I was cold and miserable as well, and determined to get us out of that storm as soon as I could. I was also thinking what an idiot I had been, ignoring the storm and letting it catch us. If I had just looked up and seen what was going on 15 minutes before that cool breeze hit, we could have easily outrun the developing storm. But I didn't, and I didn't seek shelter in the last available place, and there I was, getting pelted by rain, alternately scraping the flats or getting tossed by chop in deeper water, and almost getting struck by lightning in a small boat.

When you're out boating, even with your girlfriend, always keep an eye on developing thunderstorms.

We picked our way along for another miserable mile or two in the heavy rain, with lightning coming down further and further away to the east. Soon the sky to my left was lighter, and less rain was coming down. We were under the trailing edge of the storm in no time. The wind died down, and ten minutes later we were crossing the bay on a nice, sunny day in a light chop.