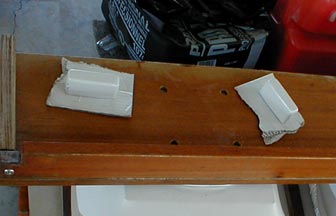 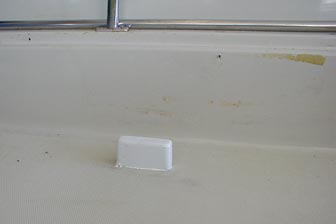 The port side cleat installed on the deck. 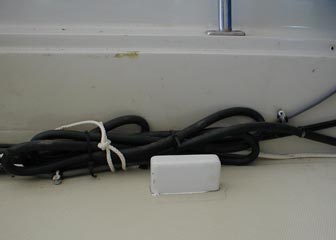 Starboard side cleat installed on the deck. 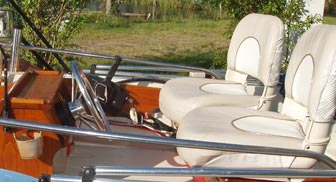 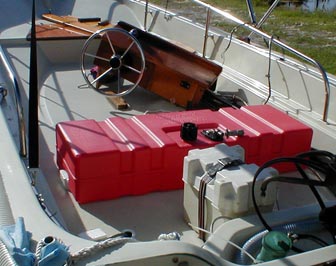 Fuel tank set in place in the Whaler with deck cleats in the recesses of the plastic fuel tank. 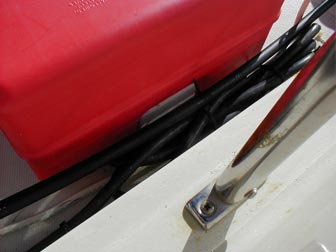 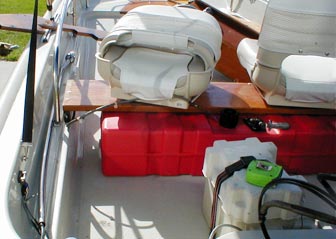 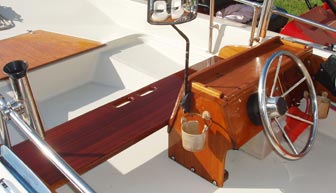 The refinished console and new mahogany thwart bench seat. You can just barely see the battery where I placed it under the console.

When we bought our 1989 Boston Whaler 15 back in 2001, it was a Super Sport model. These had a railing that wrapped all the way around the bow and back nearly to the stern, and a thwart seat forward of the console. The Super Sport also came with a nice bow chock fitting in place of the standard running light. The main seat had a backrest and a fiberglass storage box underneath. The box was accessible by lifting the hinged seat, or by a small hatch behind the backrest.

Maybe this arrangement worked on the 17 foot Whalers, but it didn't fit on a 15' boat. The backrest was too low, and the whole seat was set too far forward to accommodate the part of the storage box behind the backrest. The railing was only as high as my shins around the bow, and made it difficult to get on and off at beaches. There were 12 and 6 gallon fuel tanks in the stern of the boat, along with the battery, so there was only one place I could put my foot down aft of the helm bench.

All that fancy stuff had to go.

I cut the railing, bought a couple of 90 degree pieces and stanchion bases, and ended the bow rail forward of the front seat. It's not as neat as the bend at the aft end, but it makes a nice hand grip for forward passengers. Having the rail removed from the bow itself makes it easier to get on and off the forward part of the boat. If you don't want to cut and modify railings, you can buy Boston Whaler stainless rails online.

The Helm Bench and Storage Box

I took out the helm bench/storage box. The mahogany bench seat and backrest were both just a bit too short for what I wanted to do next, so I used the front seat, which was already the perfect length. After an exhaustive search of local marine hardware stores and discount stores, I could not find any good boat seats. I found some cheap boat seats at Wal Mart that were OK, but the padding wasn't very thick. I found some expensive ones at various boating stores, but most were upholstered plywood and foam construction. I knew that once I got them wet, it would be the beginning of the end, and there would be nothing to do about it.

In Search of the Perfect Boat Seats

Boat seats with removable covers were junk, and not comfortable. Boat seats with fixed covers would get soaked and mildew and the wood would rot. I found some seats with good thick foam cushions, nice high backrest at a good angle, and hinged to fold down out of the way. Construction is all aluminum and rotomolded plastic, and the foam inserts can be removed from the seat covers, which snap on with a few ordinary marine snap buttons. Outstanding. They were everything I wanted, and cheaper than the plywood ones. These can be properly dried out when we get them wet, and the structural parts are impervious to salt water corrosion.

I bought them, and bought a couple of swivel bases to mount on the bench seat. I bought the best low-profile swivel seat bases I could find, but could not find any which will really last a long time in the salt environment. Before installing them, I coated them with LPS-3 corrosion inhibitor and set them in the sun to bake for a while. I am careful to rinse them out after use, but they are now 6 years old, and you can see and feel some rust.

I found a low-profile 18 gallon plastic fuel tank that would fit underneath the helm bench. I had had a similar 12 gallon fiberglass fuel tank on a 15 Whaler when I was a kid, and knew it would not want to stay put. On that boat, I had eventually solved the problem by surrounding the fuel tank on all sides with 1" by 1" mahogany strips, varnished and screwed and bedded to the deck. It worked, but it tended to grow mildew underneath.

This time around, I molded a couple of fiberglass feet to fit into recesses in the plastic fuel tank and painted them white after sanding them smooth.

I marked the area they were to fit with the tank in place, then ground off the gelcoat and secured them to the deck with white Marine Tex.

With the tank in place, one side fit into the recess perfectly, and the other side just needed a couple of styrofoam shims to prevent it from sliding. The mahogany thwart seat with our two swiveling boat seats sits just above it.

With the forward bench seat moved to the back, I was going to need a new forward bench. Also, the bow locker cover had some rot, and though it looked pretty good on top, it was almost gone. Where could I find good marine plywood with a mahogany veneer, and also find a mahogany plank to use as a front seat? On the internet, of course! I went to the wooden boat discussion forum, and asked if anyone knew of a good hardwood supplier who would also have marine grade plywood in my part of Florida. Very quickly, I was pointed to World Panel, a dealer across the state, and I bought a full sheet of 3/4" 9-ply mahogany veneer marine plywood and a 6' by 14" by 1" mahogany plank. They were shipped straight to my house.

I cut out a new bowlocker cover from the plywood, and cut the plank to the correct length to be my new front seat. I also cut two hand grip holes side by side near the center of that seat, to give passengers an additional place to hold on. They also come in handy when slipping the seat in and out of the slot underneath the wood side rails that hold it down.

I wasn't going to add brand new pieces of wood to all those older ones, so I decided to refinish all the wood on the boat. I took every scrap of wood off the boat, disassembled everything, and put 5 to 6 coats of varnish on all of it before putting it back together. In the process, I discovered that the side rails and console had some rot around the screws, so I drilled out the holes and put in mahogany dowels, then redrilled the holes. The wooden cleat that held the inside leg of the console was completely rotten — mostly just a shell.

When I dried it out, it weighed only a few ounces. I drilled a few holes and filled the whole thing with West System epoxy. It looks like the original wood, but it is mostly just a piece of plastic now.

The finishing touch was to move the battery underneath the console. It barely fits, and kind of interferes with the steering cable, but I am glad to have the weight out of the stern of the boat, and to have the extra deck space back there. We keep a medium sized cooler back there as a dry box for holding towels, wallets, cameras, and other things that don't need to get wet.

I had to use heavier battery cables due to the increased distance between the battery and the engine. My friend Frank came over and made them up for me. He soldered end pieces on the new cables, then shrink-wrapped wire to the connectors to seal them.