You are here: Home / Boating Fun / Watching a Fishing Boat Sink While Sailing My Kayak 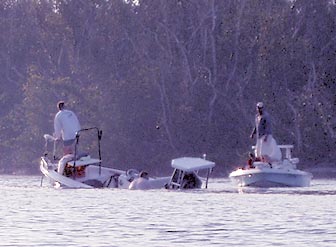 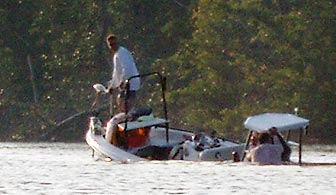 They turned back up into shallow water.

As they approached the dock, I yelled to them that I might have the plug they needed in my truck.

One fine May morning I went for an early-morning sail on my Klepper foldable kayak before work. It was peaceful down at Ponce De Leon Park, right up until about 7 am, when I heard an outboard engine going by at high speed. I looked out, and there was a fishing boat cruising down the harbor at about 60 knots, throwing a long rooster tail, with two other boats hot on his tail.

I'm always amused by the high speed antics of local outboarders, so I decided to grab the camera and take a shot.

Then a few more came, and a few more, and I remembered that today was the beginning of the annual Redfish Fishing Tournament. I'd guess about 80 boats went by in the next few minutes, all running at high speed down the harbor toward the best fishing areas. There was also a white helicopter following the fleet of fishing boats.

I finished rigging up the kayak and started sailing around the area. The tide was high, so the flats were about 3 or 4 feet deep, perfect for kayak sailing. If I capsized the boat, it would be easy to stand up and right it. The wind was very light, just starting to stir.

Soon I saw a flats boat coming northeast around the corner and heading straight for me. I was on a tack that took me a little off shore, and it looked like he meant to pass inshore from me. OK, I continued on. He turned a bit, on a heading to cross the deep channel a bit closer to shore than I thought prudent, even on a high tide. Crazy fishermen!

Then he started what I thought was a turn into the channel, then started slowing down, and then he overshot the channel and was headed straight for the (rocky) shore! I was only about 150' away, and I heard his partner on the boat yell something like "You gonna beach it?" These maniacs were headed into extremely shallow water, with scattered rocks laying about on the bottom, and they intended to run right up on the rocky shore! They quickly began hitting ground with the engine, which kicked up and spat a huge roostertail of mud as the boat settled to a stop in shallow water.

There was another boat passing by in the channel, a little further out than I was, and as the grounded boat's engine shut down, I heard that person cackling loudly and saw him pointing at the hapless boater, about to fall over from laughing so hard. That's not nice, but it was kind of funny. I have to admit that my first thought was to grab my camera, which isn't that nice either.

As I sailed over toward the boat, another boat came out from the ramp and offered assistance. I could see that the grounded boat was floating very low in the water, and I wondered if it had hit one of those rocks and put a hole in the hull as it came down. I then heard one of the guys on the boat saying something about a plug. It seems they had one of the screw-in type plugs, which apparently came unscrewed as they crossed the harbor, and they began to sink as soon as they started fishing. At least that's what the guy said.

I know that you are supposed to put a wrench on those screw-in plugs, but I also know that some people don't do it, and I have never heard of one coming out. I have heard of plenty of people forgetting the plug, and I've done it myself, but that's what the guys said. OK, whatever.

People don't make good decisions under lots of stress, and the next decision they made was a bad one. I guess they were trying to move the boat around to the ramp, but they started pushing it off the flat and into the deep channel around to the boat ramp.

They turned back up into shallow water.

I yelled to them that I might have the plug they needed in my truck, and sailed back over to the beach area to check. The plug was not there, and I sailed back out to the boat to tell them. They were on the cell phone with friends, trying to arrange a ride back to their truck, when one of the guys on the fishing pier offered to give them a ride. Punta Gorda may have the largest concentration of bored and generous retirees in the nation. They thanked me for looking, and I sailed off.

Good Sailing in My Kayak

The winds had been pretty light until that point, but started to pick up a bit, and I actually got in some of the best sailing ever on the little kayak. There was just enough wind to achieve max speed on a beam reach without capsizing. I had the leeboards making sucking sounds and humming as I blasted along. I had no GPS aboard, but I would guess that I sustained better than 4 knots, and peaked at or near 5 knots. I sailed up and down along the shore, staying out just far enough to get the steady wind, and was really starting to get a good feel for the boat.

The kayak will not accelerate quickly if I let a puff of wind heel it over, but if I keep it level and adjust the sails for the apparent wind change as it speeds up, I can get some good little bursts of speed. I lean my elbow on the upwind side of the boat, then lean in or out to put more or less weight on it as the wind speed changes. It takes quick reactions because everything is so small, light, and sensitive.

By the time I got back and got the mast, sails, leeboards, and rudder off the kayak and loaded up on the truck, the sunken fishermen had somehow made their way around to the ramp and they had the boat on the trailer and pulled up out of the water. The bilge pump was hosing away over the side, and I could see a steady stream coming out the drain hole. Not a good day for those guys. Lots of things on that boat got a salt water bath.

I wish I could practice sailing the folding kayak more often, but it took nearly 2 hours to get all the pieces taken apart and rinsed down. It's a wood frame and skin construction. The skin of the boat is made of canvas on top stitched to hypalon rubber on the bottom. Inside are nylon sleeves running along the seams on each side, each of which contains an inflatable plastic tube. When the skin is on the frame, you inflate those tubes to stretch it tight. When you are rinsing out beach sand and salt from the empty skin, they make things a bit difficult.

It takes a while to get all the water out of the skin and let the canvas and nylon dry completely before folding it back up and putting it in the bag. Most days, the thought of that task makes me take the Ocean Kayak Sprinter, a fast plastic sit-on-top kayak which requires virtually no maintenance. But it's not rigged for sailing, and I'm glad I took the foldable kayak that day. Conditions were perfect, with just enough wind but not too much, and enough water on the flats to sail. These days, what I really want is a Hobie Mirage Adventure Island kayak — the thing is rotomolded plastic, so it can be cleaned by squirting it off with the hose. The sail can be deployed in mere seconds. And it's loads of fun!