An outboard engine may look a little funny hanging off the back of a sailboat, but it can offer extra maneuverability that is impossible with inboard engines.

Inboard engines are prone to "prop walk" at slow speeds, because the shaft is usually not parallel to the surface of the water. The angled shaft means that a propeller blade on one side of the shaft has a different angle of attack from the same blade when it has rotated around to the other side of the shaft. On most sailboats (with conventional clockwise shaft rotation), the prop walk will pull the stern of the boat to port when the engine is put into reverse.

Outboard engines can be steered independently of the ship's rudder, and offer the ability to turn the thrust of the engine so as to cause a controlled "prop walk" effect. The 4 frames of these two pictures show the technique used. 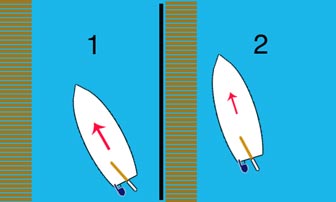 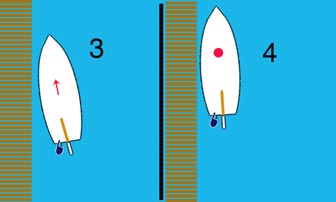 In the first frame, the boat is approaching the dock at an angle. The engine is running in forward at idle throttle, and the tiller has just been turned to swing the boat in line with the dock. The large red arrow shows the speed and direction of the boat.

In frame two, the engine has been put into neutral, and the boat is coasting toward the dock. Less rudder is being used now, as it is not necessary with this technique to use the rudder to get the boat parallel to the dock.

Angling the Boat Properly and Coming to a Stop

In the third frame, the engine has been put in reverse and turned to port (meaning turned in the direction which would produce a turn to port if moving forward). The boat is almost stopped now, and the reversing engine will slow it further, while at the same time sucking the stern of the boat toward the dock.

The boat has come to rest alongside the dock in frame 4, and the engine is put back in neutral.

Because the boat is moving forward throughout the procedure, the rudder remains effective in controlling which way the nose of the boat is pointed. The engine is used only to slow the boat down and draw it closer to the dock. The boat could easily just coast in to the dock, but if there is not room to coast along for quite a distance while lining up with the dock, this little trick can help.

"Crossing" the controls, with the rudder in a turn to port and the engine in a turn to starboard, will produce a bit of sideways slippage, and that is the point of the above procedure. But the engine and rudder do not have to fight each other. While some inboard sailboats can be very difficult to control when backing up, reversing in an outboard powered sailboat is very easy to master.

Turn the Rudder, Turn the Engine

The key thing to remember is: when you turn your rudder, turn your engine at the same time and to the same angle. I have backed many small sailboats using the engine and rudder in tandem, and all are, if anything, too responsive to that kind of control input. There is none of the sideways propwalk and sluggish response to the helm seen in many larger, inboard-powered sailboats when backing.

Yes, it is a bit more trouble to handle an outboard, reaching over here to throttle and steer it, over there to shift the gears, and all of it over the transom of the boat, which is not a great place to focus your attention when approaching a dock. But once you master the simple techniques of outboard engine control, you will find your small sailboat very easy to control in any kind of docking situation.