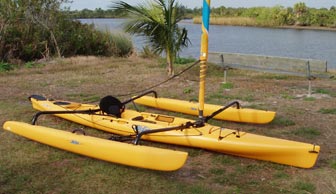 The Hobie Mirage Adventure Island — the kayak that sails, paddles, and pedals.

His and Hers Reviews — Her Review

Hobie calls it a 16' trimaran "sail/yak" — but I just call it fun. My husband and I had an opportunity to play with Hobie's revolutionary pedal-powered, sail-powered, paddle-powered Adventure Island kayak, and it gets a big thumbs-up from the wife.

When my husband heard my shout of "Yee-Haw!" from out in the river, he said to himself, "Oh, good, that means I have permission to buy one." I told him no, it doesn't. It means he has permission to buy two, and that if he buys only one, it better be the red one and have my name on it.

The Adventure Island is indeed a trimaran, with two amas that are easily attached or removed via the metal crossbeams. The amas can be folded in toward the boat — easily done while the kayaker is seated in the boat — to bring the boat up closely alongside a dock, ramp, or beach.

When the amas are out, the boat is exceedingly stable, and even when the amas are folded in it's much more stable than other kayaks. Even deliberate attempts to rock it, while standing up in the cockpit, fail to elicit much side-to-side movement. Anyone who dislikes the instability of most kayaks will find the Adventure Island a rock-solid delight. 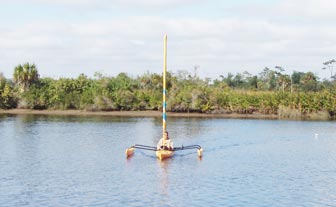 The Adventure Island can be paddled like a conventional kayak, or it can be propelled by pedaling Hobie's "MirageDrive," which uses bicycle pedals that operate much like a stair-stepper, which oscillate underwater flippers similar to a penguin's. The flippers are surprisingly efficient at moving the boat through the water, and turned out to be very quiet. Women generally don't have as much upper body strength as men, and the pedals allow us to use the larger muscles in the legs to power the boat. I always have trouble keeping up with my husband in a paddling kayak, even when I'm paddling the faster boat, but I had no trouble keeping up with him when he was paddling his fast kayak and I was pedaling the Adventure Island. The demo model we used had the standard fins, but when I get my own Adventure Island, I'll probably purchase it with the "turbo fins" — and it won't surprise me if I sometimes find myself pulling ahead of Tom when I'm using those.

The Adventure Island can also be paddled like a regular kayak, too. There's a handy bungee cord and knob on the side of the boat to clip the paddle to, so that it's handy without being in the way. I paddled a bit, but as usual I immediately started falling behind Tom, and my arms grew tired quickly.

Instead of a foot-controlled rudder like most kayaks have, the Adventure Island has a little lever (tiller?) built into the left gunwale. When under pedal power, or sailing, the steering lever is convenient to use, but serious paddlers who want to use a kayak primarily for conventional paddling probably wouldn't want the Hobie Adventure Island as their primary kayak if only because of the hand-controlled tiller. When paddling, the kayaker must remove the left hand from the paddle to adjust the rudder, which I found inconvenient during my brief period of paddling. Mostly, though, I left the paddle clipped to the side of the boat and enjoyed pedaling it. 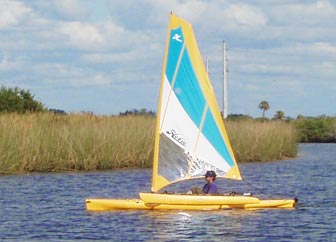 Sailing the Adventure Island is pure, unadulterated fun. Before I went out in it for the first time, I was a little concerned that I would have trouble reaching the sheet from my seated position, or that the sail would be difficult to furl or unfurl. My worries were groundless, though. Sailing the Adventure Island is so easy, even a caveman could do it. When you're ready to unfurl the sail, you simply pull one line back towards you until the sail is out — an operation that takes just a few seconds and requires no specialized knowledge or skill whatsoever. When you're ready to furl it, you pull a different line, requiring no more time or skill than unfurling it. The sail is self-tacking, so tacking only requires adjusting the rudder to your new tack. My husband tells me it's a good idea to tighten the sail a little before tacking, then ease it back out after the tack, to reduce the wear created by the impact of the sail coming over hard.

The boat sails nicely on a reach and downwind, but I didn't really test how well it sails on an upwind tack or how closely it can sail into the wind. I'm not that skillful at trimming the sails even on a "real" sailboat. I'm pretty sure Tom will address that in his review, so I won't worry about leaving out such information. I can say that in our river where we played with it, I sailed upwind, downwind, and across the wind, and didn't have the sail flapping about too much.

Newer: Losing A Spear To A Shark
Older: Caring for Marine Canvas Covers and Isinglass