You are here: Home / Fishing / Losing A Spear To A Shark 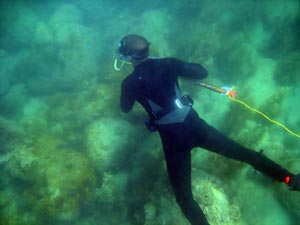 The best diving and spearfishing in the Exumas can usually be found in the cuts between the islands. When the tide is flowing, you can drift through and spear any fish you happen to come across, then ride on the boat back to the up current side and repeat. The only problem comes if you spear a fish and can't immediately grab it. The current is usually pretty strong in those cuts, and retrieving a speared fish from a hole can be difficult. Because of the currents, it is best to dive the cuts on the slack tide.

We were spear fishing one day outside one of the small channels, and not having much luck. The bottom there was pretty boring and featureless compared to the spectacular reefs off the Abacos and the rich sea fan covered bottom around the Berry Islands. I was in the water for almost an hour without seeing anything that looked like dinner, and was starting to get frustrated. I had been down to look in every hole and crevice in the bottom, checked the back side of every rock for wily grouper and lobsters, and I had come up empty every time. I did see a reef shark about 3' long on patrol a couple of times, and a decent sized Strawberry grouper. Even a decent Strawberry is still a small grouper, and I figured the guys would deride me for being a baby killer if I shot it, so I passed it by.

After I had been in the water a while, I found myself back at the same area where I had started, looking once again at the same Strawberry grouper. Having seen nothing else I wanted to eat, that grouper was starting to look yummy. I dove down and speared it with my Hawaiian sling. The 5' spear passed right through and hit the rock behind the fish with a muffled "tink" sound, and fish and spear fell on the bottom. I grabbed the spear off the bottom and headed for the surface, glad to have made a head shot that would not damage any meat. OK, so I was aiming for the middle of the fish and got lucky. Sometimes it is better to be lucky than good!

I spiraled around as I swam upward, looking for my buddy in the dinghy and for that darn reef shark. I saw no boat, but sure enough, here came the shark! That was one well educated shark. The grouper had dropped dead without making much, if any, noise, and it was way to quick for the shark to have smelled the blood. The shark came in response to the sound of my spear. A shark dinner bell! Great, I had an experienced thief pursuing me.

I broke the surface with the fish held high overhead, bellowing at the top of my lungs for the boat to come and get me. Gene had apparently turned off the engine and was relaxing, and I saw him jump up and turn to fire the engine before I looked back down into the water. He was only a short distance away, and would arrive in seconds. I started finning along the surface on my back, still holding the fish up in the air. I could hear the boat approaching, and looking down my body I could see the shark coming up. I realized that the shark was definitely going to beat the boat.

Throwing Away Dinner — And My Spear! 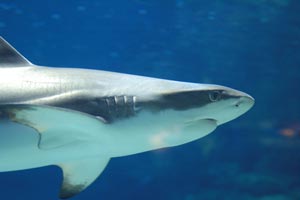 A reef shark much like this one ignored the strawberry grouper and chased my spear all the way to the bottom.

In one motion, I threw my spear and fish at the shark, rolled over onto my stomach, took a quick stroke, and prepared to launch myself like a missile into the dinghy. I lost sight of the shark for a moment as I rolled over, and wasn't sure whether my decoy had worked. As I grabbed the side of the boat to pull myself aboard, I saw a pretty funny sight. The grouper was kind of drifting around back there upside down, my spear was falling toward the bottom, and the shark was in hot pursuit of my spear!

The shark got very excited for a moment when the spear hit the bottom, then seemed confused. I took a look around at nearby landmarks and the look of the bottom in that area, and decided we should go and get our other diver out of the water before he speared something with this excited shark in the area. We would come back and get the spear after collecting the other diver.

We brought the other diver back to help hunt for my spear. I knew we were in the right area, and knew that bottom well, or so I thought. I had seen the spear fall, and knew it was lying out plainly visible on the bottom. We looked for it for an hour or so, and though we did see the shark a few more times, we never spotted the spear.

The weather was bad for the next couple of days, and we lived on frozen fish and lobster from previous successful dives. We were preparing to leave the area, and I had already written off the spear, but Gene said we should go and look for it again. I thought the effort futile, but if he wanted to go and look for my spear, who was I to say no? He swam around for a little while and found it!