You are here: Home / Fishing / The Big Dolphin Roundup 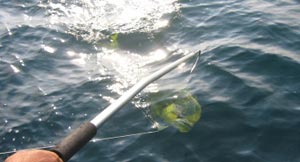 We did a lot of dolphin fishing in the Florida Keys. Catching a big dolphin fish was always fun, but eating it was even better.

Back in the 1970s, my family kept an Aquasport 240 at Tavernier Creek Marina in the Florida Keys. We did quite a bit of dolphin fishing in the summer months, and always had a well-stocked freezer. We gave it away to friends, smoked it, and ate it every way you can imagine. Fishing was great back then, and if you found a weed line, a flock of birds or almost any kind of floating object, you were likely to find dolphin underneath.

We were so successful that other boats from the marina would attempt to figure out our fantastic fishing secret, but none had a chance. There was no big secret: we just had a large fuel tank and we had my brother, who could spot a bird or a piece of flotsam or a patch of seaweed from an incredible distance. We would head out the channel, turn to a course of 150 degrees, and run at cruising speed into the Gulf Stream until he spotted something.

On one calm August day, he saw something rather large in the distance. When we came up to it, we found that it was a small dinghy, floating upside down. It had clearly been floating for quite some time, as it was covered in marine growth and had a small herd of baitfish darting about. Best of all, as we trolled by, we could see some HUGE dolphin down there! I was on the favored side, and my ballyhoo was going to go right next to the thing! I braced for a strike, and it came.

The biggest dolphin I had ever seen broke out of the water, shook, splashed back down, and took off on a mad run, peeling line off my reel. I fought the fish for about half an hour or so before getting it close enough for my dad to gaff it aboard, and what a fish it was! I couldn't believe it. We later weighed the fish, and it weighed 33 lbs.

We trolled back by the dinghy, and were rewarded with another strike. This time my oldest brother caught the fish, and it was even bigger! That dolphin weighed 48 lbs. We were much closer to the dinghy during that fight, and one of our guests was casting various baits over in that direction. He caught a small shark, which we released, then he caught an 18 lb. dolphin, which seemed kind of small on that particular day.

My brother was exhausted when we finally got his fish aboard, but not too tired to notice a large bull dolphin lurking near our stern. He flung a jig out on our largest casting rod, and the fish hit it. This was a pretty big spinning rod, but a REALLY big dolphin, and it started taking line like crazy. He handed the rod off to his guest, who was fresh and a good fisherman. Somehow, he avoided getting the reel completely stripped on that first run, and began bringing the fish back in.

It was a long process. The fish was sounding, then he would drag it back up to the surface while it rested, then it would sound again. The fish could not strip the reel, but he could not bring it to the boat. The struggle went on for hours. At one point, we noticed that he was getting dehydrated, but his hands were busy with the fishing rod. We took a water bottle and poured water down his throat. He finally got the fish alongside, and aboard it came. 54 lbs of bull dolphin.

Earlier in the day, we had caught a few school dolphin, including one of about 10 lbs, so our fish box was stuffed full, and we were out of time. We headed back home, or so we thought. We had no fancy electronic navigation devices back then, just a compass and a chart, and my dad guessed wrong about the speed of our drift during the various fights. We arrived at the edge of the Stream miles from our intended destination, but figured out where we were and went on home. After all the fish were cleaned, we had a huge pile of large filet ends and steaks, along with some really impressive dolphin roe from a couple of the larger cow dolphin.