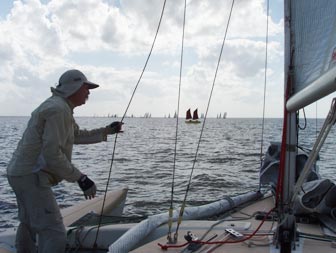 Sailboat racing in January in Florida means putting on a long-sleeved shirt, and perhaps a hat for protection from the sun. 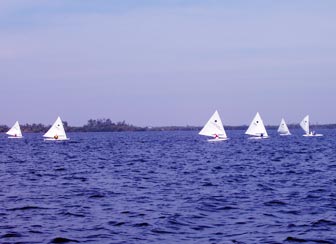 The Sunfish Nationals competition was taking place in Charlotte Harbor during our third race. 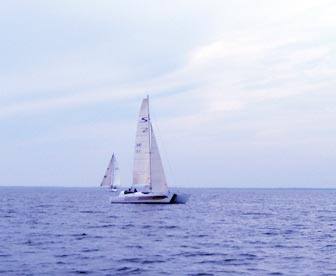 Race three saw the arrival of a new participant in the multihull fleet, a Stilletto 27, and we also had an Edel 35 catamaran join the fun. 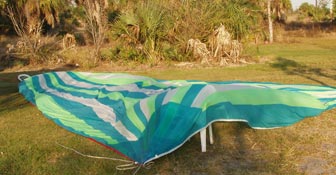 When I took the spinnaker home for a good bath after Race 4, I discovered a small rip in the fabric. 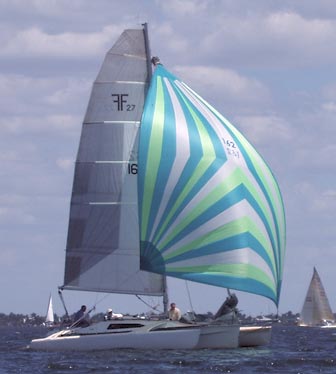 I finally have a decent photo of Surrender, our F-27 trimaran, sailing with her spinnaker.

On our first race of the Spring Series in January, the weather could not have been better. An extra shirt was enough to keep warm, and winds were moderate at about 10 knots.

We won the multihull division in our Corsair F-27 trimaran that day, completing the 6.84 mile course in 1 hour 22 minutes. That's pretty quick, but not quick enough to match our rating. It's probably best not to compare monohull and multihull boats using PHRF ratings on upwind/downwind races, but we came in about in the middle of the fleet overall on that basis.

In that particular race, I didn't even have to look at the corrected times to be a bit humbled by the Soverel 39, which completed the course in 1 hour 21 minutes. Oh well, at least we have plenty of room for improvement! The group of S2 7.9 spinnaker sailboats, joined by a Colgate 26, all sailed around the course in just over an hour and a half

We Missed the Second Race

We had to miss the second race of the series, and I thought it just as well when I saw the conditions. With a front approaching, the winds were out of the northwest at 12 to 14 and there were some showers around. I'm a fair weather racer, and it seems many in our club felt the same way. Only 19 boats came out, none of them multihulls, so we would have had no competition anyway. The previous week, there were 38 boats in the race.

On our way out to the third race of the series, we sailed past the ongoing Sunfish Nationals competition. They looked like they were having a great time in the light but steady breeze and small chop on Charlotte Harbor.

The Farrier F-33 won the day; we came in a distant second.

That nice 5 knot breeze we had seen all day died just as the F-33 crossed the finish line a short distance in front of us, and 40 minutes later, we drifted slowly across the line in essentially calm winds. Most of the fleet took well over 2 hours to complete the 3.93 mile course, and most of that time was spent drifting toward the finish line at almost imperceptibly slow speeds. I admit to being a bit envious of the powerboat that came roaring through our becalmed fleet, actually getting where he was going.

For race 4, we again had nice weather, with winds out of the south/southwest at about 12. We sailed pretty well that day, not making many mistakes and getting a couple of breaks from the erratic harbor winds. We finished the 5.36 mile course in 54 minutes, a minute and a half ahead of the F-33, who has to give us loads of time. I figured we won the race when we crossed the line in front of him, but I didn't count on the Edel 35 catamaran, which handled the conditions beautifully and was well-sailed by her crew. They went around the course in one hour and three minutes, fast enough to correct ten seconds ahead of us on rated time.

We got the spinnaker pretty wet and salty that day in the chop, and I decided to bring it home for a bath. Good thing I did! I found a small rip in the fabric, and a nearby separation along the edge tape.

Race 5 Was A Cocktail Cruise

Race 5 was more of a cocktail cruise around the race course. My usual crew had other commitments and I raced with my wife, who loves to sail but doesn't really care where or how fast we go, and a friend of mine who has done a little sailboat racing, but never on a fast trimaran. I decided it was a bad day to use the spinnaker, and just put up the roller-furling reacher. We could have gone faster, but would have required activity by the crew that they weren't quite prepared for. They knew how to operate a roller furled headsail, and with the course we sailed that day, all they had to do was drop the jib at the upwind mark, and jibe the reacher at a reaching mark.Then we ran for the line with one more gybe at the end.

It was mostly a relaxing day of sitting around the cockpit chatting and watching the boats sail around us. I admit to looking over at the Morgan 30 sailing straight for the line wing on wing, and thinking, I could beat him with my spinnaker, but even though it was a race, this day was not all about who we beat. The crew had a good time, and that's why we go out. Oh, and we won our class anyway, and I have completely wiped the picture of the ancient Morgan 30 beating my high tech trimaran BOAT FOR BOAT from my mind.

Race 6 Got Us Pics

For race 6, I talked my wife into coming out to shadow the fleet in our 15' Boston Whaler to take pictures of the sailing race. The weather was great for racing, if a little bouncy for a small powerboat. We finished first in our class, and about in the middle of the fleet on corrected time, which is not bad for us.

Newer: The Time I Got Thrown Overboard
Older: The Big Dolphin Roundup