You are here: Home / Fishing / I Know You’re Out There 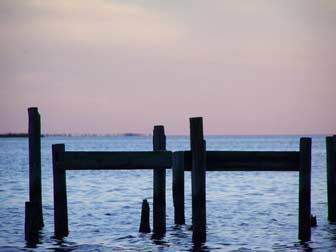 Must be redfish around those pilings...

The water had that look. I don't know how to describe it but I knew there was a fish among the pilings of the pier. It just had that LOOK. Some of you fishermen know what I mean. At that moment, with that particular current, tide height, sunlight, water clarity, and wind, there was a fish among the pilings. They drew me like a magnet and the silver spoon was soon in the water, probing for the prey.

The spoon was chosen because the water clarity is way down from last week. We needed rain and about 5” of it came over a couple of days. In some places that amount would be a major catastrophe but here along the Mississippi coast, it is not at all uncommon. The rain has muddied up the water upriver though and the wind isn't helping. The flash of the spoon would help in these conditions. The redfish would think MENHADEN!!!!

And a word here. If I were REALLY serious about catching these fish I wouldn't use artificial bait in these conditions. A local favorite is a fingerling mullet head. It's murderous but this endeavor is only somewhat about fishing. It's also about listening to the waves hit the shore and watching the osprey dive on a mullet while I reel. Saying hello to a redfish is just a bonus.

On the fourth cast the fish struck. I was reeling the spoon slow and steady and felt the bump and the line went slack. The fish was headed towards me and I had to reel like crazy before setting the hook. A redfish is fast and powerful and this one was no different, immediately bulling towards the pilings. This wasn't my first rodeo and I had already begun moving away from the pilings pulling the fish with me.

There is always a delicate balance here. If the fish gets into the pilings it is gone almost every time, but if one fishes too far away from their shelter, the probability of a strike goes down as the distance from them increases, especially in cloudy water. I have lost many fish to the barnacles on those pilings. This time the pilings were too far and the fish too small and I horsed it away from safety. A redfish fights until it gets landed and it was finally defeated, the spot on it's tail shining black in the fading daylight. I unhooked it and watched it swim back into the deep.

It is early in the season and the rat reds are running these shallows, searching for bait. Shrimp, crabs, fish, and scraps...they'll eat pretty much anything but the high protein of menhaden make them a favorite. Late in the year before the cold, the big bruisers will move in and a different rod and heavier line are called for, but the little rat reds are fun to catch. I caught three more and got another up to the top of the water before the hook popped out. All were released but I have orders from the chef the next couple go in the pot.