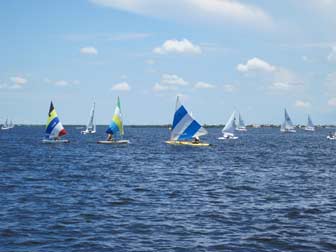 There is nothing like the feeling of a small sailboat. Whether you're nursing a little speed out in light air or hanging on for dear life in gusts, you feel every motion of the boat in your body, and every movement of your body affects the boat. A good fleet of small boat sailors came out to enjoy that feeling with a little friendly competition in Sunfish, Precision 15, and Flying Scot classes in the 2010 Hibiscus Cup Small Boat Regatta, put on by the Punta Gorda Sailing Club and Charlotte Harbor Community Sailing Center. 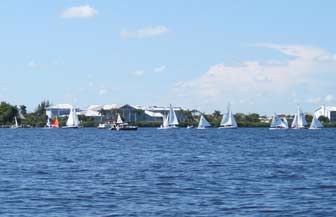 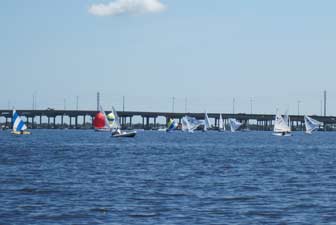 Small sailboat fleet rounding the upwind mark near US 41 bridge

Morning winds were from ENE, so the upwind mark was initially set near the US 41 bridge off the park. Winds were light and already starting to shift before the first set of class races was completed. One Sunfish sailor was struggling toward the upwind mark, last to go around, and we were instructed by the race committee boat to pick up the mark for placement in the new wind direction and tow that Sunfish back to join the fleet for the next start. The poor guy said he felt a bit embarassed by having to take a tow, but that's the sort of thing that can happen in short, rapid fire racing. If you get stuck in a hole with no wind and the fleet finishes the race without you, it's not right to make everyone wait while you dig your way out, and there's no shame in taking a tow over to give it another shot. 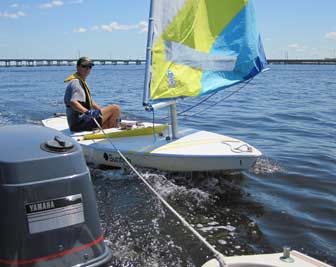 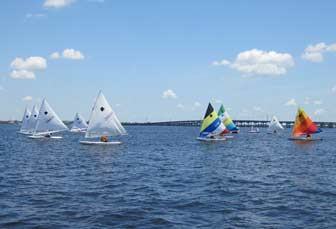 Group of Sunfish heading upwind in a pack

There was great competition in the Sunfish class at the Hibiscus Cup. Click on any picture to enlarge. 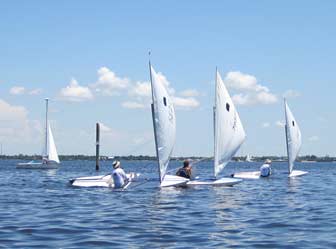 3 Sunfish battle it out near the finish line 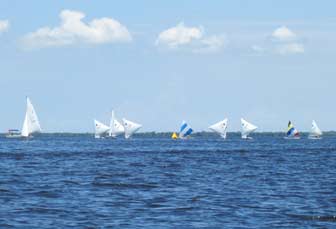 Group of Sunfish around the upwind mark and heading back

It was fun to watch the Sunfish racers heel their boats over on the downwind runs, reducing wetted surface area while putting the sail higher up into what little wind they had. Of course, one sailor had to take it a little too far and capsized. It would not be a small boat race unless someone went swimming! 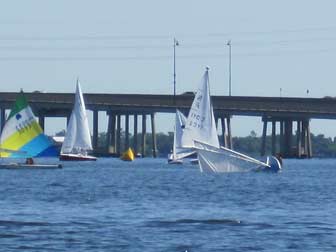 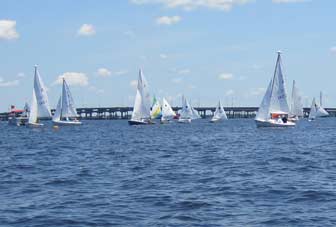 Precision 15 fleet on the starting line

Some of the Precision 15 fleet from the Isles Yacht Club showed up to race, and the Flying Scots put on a colorful show with their spinnakers. 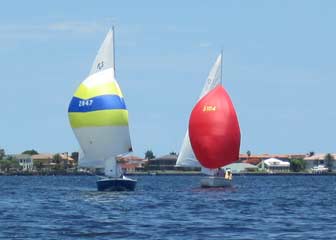 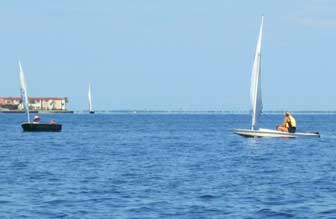 A couple of ladies were just out sailing a Sunfish and an Optimist pram, not participating in the racing activities. Hard to beat! 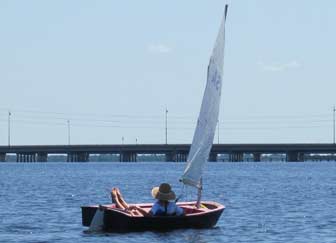 Some video of the 2010 Hibiscus Cup Small Sailboat Regatta: