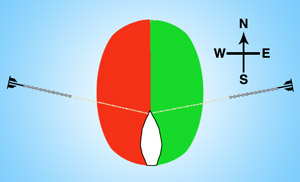 To keep each boat swinging around in the smallest possible area, two anchors are deployed in the "Bahamian style mooring" arrangement shown in the picture at left.

When anchoring out in the Bahamas you will frequently find that the protected areas are small and other boats are present. There is not room for a group of boats to swing around on single anchors without hitting each other or the shore. Also, some of the better anchorages in the Berry Islands and the Exumas are in the current-swept cuts between the islands. The boats will swing around with the changing tides, and sometimes the wind from a nearby thunderstorm will overpower the tide effect and cause the boats to swing 90 degrees or more very quickly. With each change of the tide, a single anchor would have to break free and reset itself, each time with a chance of disastrous failure.

To keep each boat swinging around in the smallest possible area, and to prevent constantly resetting the anchor with each change of the tide, two anchors are deployed in the "Bahamian style mooring" arrangement shown in the picture at left. 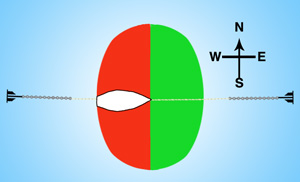 There must be enough extra scope between the two lines so that the boat can ride over one anchor while hanging from the other.

The anchors are set a little more than twice the required scope apart, with the boat in the center. Instead of swinging in a large circle and resetting a single anchor on each reversal of the tide or wind, the Bahamian anchoring technique restricts the boat to swinging in a small football-shaped area between two anchors, alternately holding on one or the other or both as tides and winds change.

There must be enough extra scope between the two lines so that the boat can ride over one anchor while hanging from the other, as shown in the second picture. 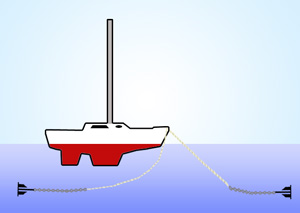 The anchor set to the east in the picture is holding the boat, and the one to the west must have enough slack and enough chain to pass beneath the boat without fouling the rudder or propeller.

The anchor set to the east in the picture is holding the boat, and the one to the west must have enough slack and enough chain to pass beneath the boat without fouling the rudder or propeller, as shown in the third picture.

This type of arrangement to set two anchors works well to hold the boat in one small area while allowing it to point into the wind or tide, whichever is stronger. There are several techniques and methods of setting anchors, and there is already a page on this site on deploying and setting an anchor. When setting two anchors Bahamian style, first consider where the boat should come to rest in the anchorage, and where the two anchors will have to lay to make that happen.

In areas where the current tends to affect the boat more than the wind, one approach is to drop the first anchor while heading up current toward the drop zone for the second anchor. Stop the boat using the first anchor, which should set it firmly into the ground, then drop the second anchor and drop back in the current to set that one. Once both are set, adjust the lines so that the boat is held between the two anchors.

Remember that holding is often poor in current-swept cuts, with little or no sand on top of the limestone rock. It may take a few tries to get an anchor to grab, and it is always a good idea to swim or dinghy over to the anchor to visually verify that it is securely set. A glass bottom bucket is a very useful tool for that purpose.

One problem with anchoring using a Bahamian mooring is that over a few days, shifting winds and changing tides can cause the boat to spin around, twisting the anchor lines together. If both anchor rodes are under tension, it can be very difficult to retrieve the anchors with the rodes twisted. It may be necessary to go out in a dinghy to retrieve one anchor, then drive the dinghy round and round the rode for the remaining anchor until the twists are gone.

Although the lines can become twisted, the Bahamian technique works better than setting two anchors off the bow and stern of a boat because while bow and stern anchors will do a good job of keeping the boat in one place, they also prevent it from turning to face the wind or tidal current, which can result in a much larger load on the anchor. Holding a large sailboat sideways across a strong current may be asking too much of the anchors. Also, if all the other boats in a small harbor are swinging around on Bahamian moorings, a boat anchored with bow and stern anchors may end up dangerously close to the other boats as they swing. Better to swing with the rest of the boats to avoid becoming an obstacle as they swing around with changes in wind and tide.