Or, How I Almost Lost My 11' Boston Whaler While Crossing the Little Bahama Bank 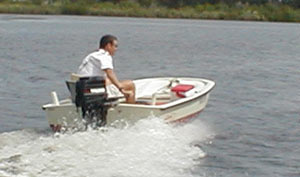 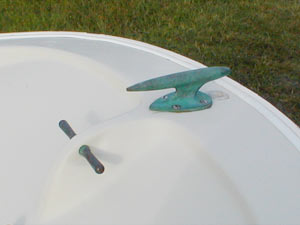 The monstrous bow cleat I had installed on my little 11-foot Boston Whaler. This giant cleat was very convenient, except when it threatened to put a cleat-size hole in the underside of my friend's sailboat.

We were returning from Regatta Week In Abaco aboard a friend's Express 37. We had towed my little 11' Boston Whaler dinghy over there without incident, and used it between rainstorms to go ashore and explore. I had found a few bleached out pieces of coral on a rocky beach, and wanted to bring them home for my marine aquarium. I left them in the dinghy for the tow home. I had dragged that dinghy all around Florida and the Bahamas and never had a problem, even in some pretty rough conditions, but that was about to change.

We sailed across the Little Bahama Bank on a reach, without a lot of wind. It was nice — but slow, and some of us needed to get home on time. When we reached the Gulf Stream in the afternoon, the forecast sounded marginal for crossing: 10 to 15 knot winds from the north and northeast. Crossing with a 10 knot northeast wind is nice. Crossing with a 15 knot north wind is not. We set off across the Gulf Stream.

It was not a bad crossing for most of the night, but it did get rougher as the night wore on into morning. The wind came up and swung around to the north, and the seas quickly became large and steep, with large whitecaps cresting on top. When I last looked at it, the Whaler was bobbing along just fine on the tow rope. I decided that was a good time to go to bed, so down I went at about 4 am. I managed to get to sleep because I was exhausted, and slept for an hour or two before being awakened by my friend Bill.

Words You Don't Want To Hear

"Get up! Get up! Your Whaler is in trouble!" Bill was yelling at me and shaking me, and I woke up startled and a bit fuzzy. I ran up into the cockpit to see what was going on. All I could tell looking back along our tow line was that the Whaler was swamped, and we were charging along at about 6 knots, pulling the Whaler right through the tops of waves. It's pretty amazing that the little boat didn't capsize. It would just pull right through the crest of a wave, taking a bite out of the top of the wave.

We luffed up a bit to slow down, and tried to pull in the dinghy on the tow line. That was not working. Full of water, it weighed too much, and we were sailing too fast. We momentarily stalled the sailboat, just long enough for us to run the tow line around a big spinnaker winch.

I had mounted an extra bow cleat on the Whaler, which was now presenting a problem for us. The Express 37 has a swept back transom, and with both boats being tossed around by some pretty large seas, we couldn't bring the Whaler close enough to the big boat that I could jump aboard, for fear that it would come up underneath the extended transom of the Express and put a large cleat-sized hole in the underside.

Bill cranked the winch until the boat was as close as we dared to get it, then I hung off the outside of the lifeline and leaped onto the Whaler. As soon as I landed on the bow, all the water in the boat started rushing forward. I figured that when the tow line came tight, the boat would be dragged under water like a shovel, and would probably capsize coming back up. I dove for the center thwart seat and hugged it for dear life, as I did NOT want to be separated from that boat in those conditions.

At the same moment, Bill saw my predicament, and eased out the tow line as it was starting to drag the boat down. I quickly moved my weight aft, and as he came tight on the tow line again, all the water in the boat sloshed back into me. It would have swept me over if I had not been hanging on tightly. As it was, most of it just sloshed over the stern of the boat, and I was riding high and dry once again.

My Coral Was The Culprit

Why did the boat fill with water in the first place, I wondered? I had towed that dinghy all over the place, and never had it fill with water before. Even in conditions where it was taking lots of spray and rain, it could always drain itself out. I looked down and saw the answer. The pieces of coral I had brought along had broken, and fragments had lodged in the drain hole. Some dive gear and a fuel tank had been washed overboard at some point during the pre-dawn pounding and swamping, but a spear was still lying along one side of the boat. I used it to finish destroying the coral pieces that were clogging the drain hole, and I made sure all the rest of the fragments were tossed overboard before I signaled that I wanted to return.

They pulled me back in close to the sailboat, which suddenly looked as tall as a house from my perspective. I have to jump all the way up there? While surfing along on this little boat in large seas? I persuaded them to pull me a little closer, promising to fend off if my custom bow cleat threatened to get underneath the transom of the sailboat. They got me close, and I took a flying leap up, landing on the edge of the boat and grabbing the backstay and lifeline. Death defying stunts like these should be left to Hollywood stunt men.

I did several things wrong.

First, take everything possible out of a dinghy before towing it. If you can't remove something, tie it down.

Second, if your dinghy is in trouble, don't just wake up and start trying to rescue it. Wake up, put on a life jacket, strap yourself to a safety line, and then start the rescue attempt. I was lucky I did not wind up swimming at some point during that procedure; it would have been very difficult — perhaps even impossible — for the rest of the crew to find and retrieve me if I had wound up in the water.