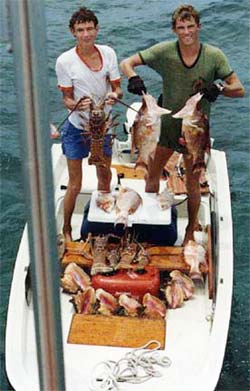 I used my 11' Boston Whaler as a dinghy for many sailing trips to the Bahamas. It was a great dinghy for fishing and lobstering, but a hard-hull dinghy this large does have drawbacks.

I used to have an 11' Boston Whaler which was used as a dinghy behind a few different sailboats cruising the Bahamas. I bought the boat new in 1987. Back then, the plain boat with no steering wheel was called the "Standard" model, and it was rated to carry 3 people with a 10 hp engine.

I put a 15 hp Johnson on it, since it weighed the same as the 9.9 hp, and I wanted one which could be removed from the dinghy reasonably easily if necessary.

It made a great dinghy, capable of carrying 3 people and some gear at planing speeds. We explored all over the place in that boat, sometimes going fairly long distances. Here is a picture of the boat after a particularly successful day of spearfishing off the Berry Islands.

We Need a Bigger Engine

It was on that day that I decided the next engine would be bigger. As we returned to the cruising boat with all those conch and lobsters and fish aboard, I had the throttle wide open, and the boat would not quite get on plane. We lumbered in, throwing a giant wake, but I was tired of running the engine so hard when the boat was heavily loaded.

I had chosen the 15 hp because it was not too heavy, but I almost never removed it from the boat anyway. The hull was rated for 25 hp in the Boston Whaler Sport model, which was the same boat with a steering wheel and remote controls.

I eventually traded in the 15 hp Johnson for a 25 hp Mercury. That was a great engine. I particularly liked the way the controls were set up. The gearshift was integrated with the throttle on the tiller. Twist counterclockwise, and it shifts into forward. Twist more, it goes fast. Twist back clockwise to go into neutral and then reverse, and further clockwise to advance the throttle in reverse.

It had a funny reversing mechanism so that turning the control counterclockwise OR clockwise would open or close the throttle, depending on which gear was engaged. It made the throttle a little jumpy in reverse, but I didn't mind. I liked being able to control everything with one hand. The only thing I didn't like was the neutral idle speed knob. It never worked very well from day one, but if you played with it a little, it did work.

Exploring With the Boston Whaler As Our Dinghy

With the Mercury 25, we once went exploring from the anchorage at Whale Cay in the Berry Islands to a little set of islands up on the bank north of Chub Cay called the Fish Cays with 4 adults, the smallest weighing 155 lbs, fishing gear including a large, heavy tackle box, snorkeling gear including wetsuits and weights and spears, a cooler with some drinks, and a dry box with cameras, sandwiches, and such. 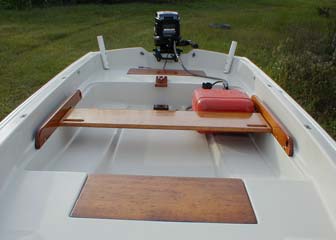 Hard-hull dinghies tend to retain their value better. This photo of my 11' Whaler was taken in 2001, shortly before I sold it. It was 14 years old at the time. A 14-year-old well-used inflatable will seldom look so good. 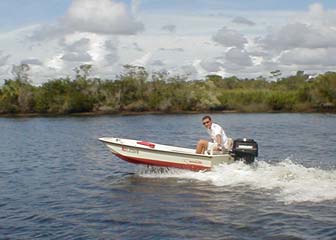 Here's me zooming around Shell Creek in my little 11' Whaler

We had very little freeboard and were lucky we did not swamp the boat. It was a long struggle getting the fully loaded boat up on plane, but we did.

Halfway across the bank, we found a nice grass bed and dove for some conch. Even with the added weight, the boat still planed out after a long struggle. The two forward passengers had to do push ups on the bow to get the boat over onto a plane. We cleaned the conch on the beach, which attracted all kinds of activity into the little cut between the islands, and made for some interesting fishing and diving.

I think we wound up with a smallish grouper and a nice snapper. While we were there, the tide went out, and there was not enough water to get the boat back on plane, or even to motor in shallow water drive back across the bank. We dragged the boat about half a mile or so before we were able to power out to deeper water and plane back to the anchorage.

It's nice to have a sturdy fiberglass dinghy when you have conch and spears and fish hooks and gaffs and little rocky islands around. Inflatables are easily damaged by all of those things, but while they might scratch or nick the little Whaler, they could do it no serious harm. Also, it was pretty easy to pull yourself aboard over the side of the Whaler, compared to hard bottom inflatables, which can be hard to climb aboard.

Hard-hull Dinghies Do Have Drawbacks

The drawbacks of having a hard dinghy? It's hard and heavy. It will bang into your cruising boat if you don't tie it off with a fender. If part of a person winds up between the boats, the person will be more badly hurt than with an inflatable. Hard hull boats are not as stable as a similarly sized rigid inflatable. They cannot carry as many people, and are slower. They are harder to lift on deck, require heavier davits on the transom if you go that way, and slow the big boat down more when under tow. The 25 hp Mercury on mine was bolted to the transom and was fairly heavy, so removing it was not a simple option.

The larger engine needed by the hard dinghy also burns more fuel, and if you are using it extensively in remote areas, carrying all that fuel can become a problem.

I loved my little 11 Whaler, and I sometimes wish I had not sold it, but it was a little too small and slow for my current needs, and I did not foresee using it as a cruising dinghy again any time in the near future. If I do go cruising and need a dinghy, I will find a rigid inflatable dinghy. The soft bottom inflatables are just not fast enough, especially when loaded down, and hard boats like the Whaler can't match the hard hull inflatables in speed, efficiency, carrying capacity, or stability.

If durability and long life are of paramount importance, the Whaler is a good choice. Mine was nearly as good as new when I sold it after 14 years of service, and that is nice. But if you are willing to compromise on those points, an inflatable boat with a fiberglass bottom is the way to go.