You are here: Home / Boat Repairs & Upgrades / New Power Tilt and Trim for a Boston Whaler 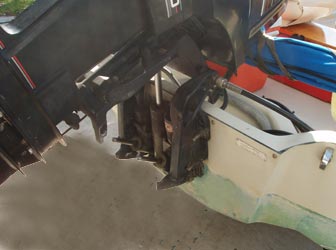 The hydraulic tilt and trim on my Boston Whaler's Merc 70

Q: How many sailors does it take to screw in a lightbulb?
A: It's cheaper to sit in the dark.

When we first bought our 1989 Boston Whaler 15, there was a slow leak in the hydraulic power tilt and trim system. If you tilted the engine all the way up and left it for a few hours, it would slowly settle back to the fully tilted down position.

I had to use the trailer tilt lock arm to keep the engine tilted up. When cruising, the engine would tilt itself down, and every minute or so, I had to tilt it back up. It was very annoying. I would tilt it up a little too high, making the boat start to porpoise, and it would quickly leak down to a good trim range for a few blissful seconds, then it would be too far down, and the bow would plow lower and lower in the water until I tilted it up too high again.

I finally decided to replace the hydraulic tilt and trim system. It was expensive, but worth it.

More About Tilt and Trim

Newer: A Boat, or an Experimental Hydro Rocket? You decide…
Older: The Catalina Expo 12.5: A Review