You are here: Home / Boating Fun / A Boat, or an Experimental Hydro Rocket? You decide… 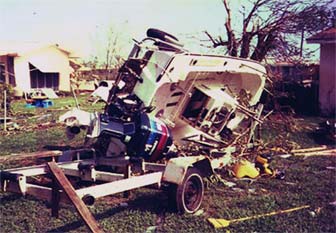 My HydraSports (aka Experimental Hydro Rocket II) after Hurricane Andrew

When I was a teenager, our boathouse had a tendency to collect anything floating down the waterway. It made for some interesting salvage items, and one day a strange vessel floated in.

It was a catamaran, about 18 inches long, with crudely carved balsa hulls and a superstructure in the center that supported a small model rocket engine. It didn't have much of a paint job, but the name was scrawled on it: "Experimental Hydro Rocket." It looked like the rocket engine had been successfully fired, and the results of the experiment were that the craft went to parts unknown, namely, my dad's boathouse. We thought it was funny.

A few years later, my brother and I bought an 18' Hydra Sports with a 150 hp Evinrude. Actually, we kind of stole it. Some guy in Palm Beach had bought the boat new, and fully outfitted it with trim tabs, stereo/cassette, removable T-top with electronics box containing VHF and CB (don't ask me why) radios, Bimini top, forward dodger canvas, built-in livewell, with deck wash hose. He had only used it once when his company transferred him to some landlocked state, and he had to sell the boat.

He sold it to a nice couple who lived near Orlando. Once a month or so, they would take it from the garage down to the freshwater lake and go out for lunch on the water. They did this for a few years, and then put the boat on the market — listing it at what would have been a good price if it had been used in salt water and stored outside in the weather for a few years. In the boat's like-new condition, it was a deal too good to pass up.

When You Find A Boat Listed at a "Steal" Price, Steal It Quick!

I couldn't believe it when I saw this boat. We quickly paid the asking price, with other bidders on our heels. The boat looked new, like it had just come from the factory. The teak was pink, the gelcoat glistening, it even smelled new.

We had the factory transom built up across the stern and reinforced, then put an aluminum bracket on and hung the engine on it. We did not install a hydraulic jack plate, as they were still pretty uncommon and expensive at the time. It would have been nice.

Once the transom of the boat was built up, they asked me exactly where I wanted the bracket mounted. What am I, a naval architect? I just told them to put the cavitation plate of the engine slightly below the lowest point on the hull. That turned out to be a bit too high, and the engine was prone to cavitation in turns and in choppy conditions. It it was annoying at times, and if I had it to do over again, I would have gotten a hydraulic jack plate and mounted the bracket lower.

The removable T-top was a nice feature. When I wasn't fishing, I could take it off the boat and use the Bimini top, which provided more shade. For fishing missions when all those straps and poles would be in the way, the Bimini was removed and the T-top legs inserted down through holes in the console and into sockets mounted on the deck under the console. It was pretty good, but proved to be a pain to slip in and remove. It wasn't stiff enough and would rattle around in seas, stressing the console.

We cut the long T-top legs above the console hand rail and had some pieces welded up to join the legs to the grab rail. That tied the whole thing together, and it was much stronger. We put sleeves in the cut off legs, so the T-top and electronics box just slipped over the top.

I found that the livewell forward of the console was not a workable solution on a boat this small. It was too bouncy up there at cruising speeds, and almost all the water would splash out of the well and onto the deck. It would have worked fine in calmer water, but I mostly fished in the Gulf Stream. The water was sometimes rough, and I did not use much live bait anyway. I removed the livewell to make extra storage space under the console.

Finally, the boat needed a name. Given the experimental transom and the manufacturer's name, I decided to borrow the name of the little model boat that had drifted into the boathouse years before: Experimental Hydro Rocket. The name was funny, but too long and clumsy, and the boat wound up being called the Ragin' Rocket.

The Ragin' Rocket was an outstanding little offshore machine. The hull, with its deep V deadrise angle, took waves very well. With the hydraulic trim tabs, I could hold that bow down and slice through smaller waves. In some of the large waves offshore, the boat's small size turned into an advantage over larger boats. The waves were big enough to be like large, smooth mountains to me, and I could ride them without pounding, while larger boats were beaten silly.

I remember heading out of Biscayne Bay one windy summer morning and hitting the waves of the ocean. They were big, but the winds were forecast to die off later in the day. We rigged ballyhoo, checked out a whole bunch of rods and gear, packed a cooler, filled the boat with fuel, and headed out to go fishing.

We ran out to the edge of the Gulf Stream at about 15 knots. A few minutes later, we passed a 25 Mako heading in. The Mako was fully rigged out with outriggers, bristling with rods, and full of some very unhappy looking fishermen as they headed home. They couldn't take the beating out there, but I just drove my boat out to the edge, which was very rough most of the morning. We had a great day fishing; the Ragin' Rocket came through for us again.

The Hydro Rocket in the Bahamas

We towed the Rocket over to the Bahamas one time for diving around Bimini. Talk about a dinghy! Fuel was expensive, but it was nice to have that kind of speed, range and carrying capacity.

We piled 8 guys and a bunch of dive gear onto that poor boat. It took a while, but the boat would still get on plane and take us to dive sites that were unreachable by an ordinary little inflatable dink. The further you go away from all the people, the better the diving becomes.

I really enjoyed that Hydra Sports and might still own it today, but my ownership came to an unfortunate end on August 24, 1992. I had tied the boat firmly to the trailer in anticipation of Hurricane Andrew, but I did not fill it with water and I did not tie the whole thing to the ground. Despite having seen the pictures of what hurricanes will do, it seemed to me that the boat couldn't just get blown over, trailer and all. The trailer was too heavy. The boat would be held down by its weight. (See Securing Your Boat for a Hurricane for more on how wrong I was, and what I should have done.)

It didn't work out that way. The boat was flipped off its trailer. A guy came along and offered me $2,000 for it, just as it sat (on its side). I signed the title, took his money, helped him flip it back over, and away it went.