You are here: Home / Boat Handling / Tilt and Trim Fun With My Boston Whaler 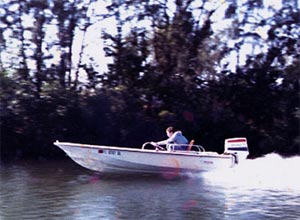 My old fifteen-foot Boston Whaler was a teenager's dream boat — but it didn't have hydraulic tilt and trim.
When I was a teenager, we had a 15' Boston Whaler aptly named the Flying Shingle. The engine was a 70 hp Johnson, and the boat was fantastic. At right is a picture of me back in the day.

That boat was in perfect trim at about 80% throttle. The gearcase and propeller are pointed just above level with the surface of the water, and the hull breaks the water right under my seat, with only the last couple of feet of each sponson in the water. If I opened up the throttle, the boat began bouncing back and forth, rolling from one sponson to the other.

That engine had no hydraulic tilt and trim system, just five holes where I could place a pin to adjust the trim of the engine. In the picture at the right, it is in the 3rd position, where I kept it most of the time. With two or more people in the boat, it was a stable, level ride at full throttle, and behaved well in chop. I longed for the infinite adjustability of power tilt and trim, so I could trim the engine in just a bit to keep the bow down going into waves, and trim it back out a bit to keep the bow higher when riding with the waves. But that third position was a good compromise, and the others had little use.

We loved to water ski with that boat, and would change to the second tilt position for skiing. It improved pickup and kept more of the boat in the water, making it harder for slalom skiers to yank the stern around with each cut. The boat would also turn tighter and faster up on a plane without leaping sideways or cavitating, making it easier to quickly return to a fallen skier if the ski harbor happened to be crowded. Sometimes I would forget to return the pin to the third tilt position as we left for the day, and the boat would leap right up on a plane and then plow along with the bow too far down. D'oh! Slow down, stop the engine, tilt the engine, move the pin, lower the engine, start the engine, head for home. I really wanted power tilt and trim.

Sometimes my activities took me through the large area of flats which extend from Key Biscayne down to Eliot Key. If the bay was rough, we'd go flats jumping. The finger channels ran mostly east and west, while I was usually heading north or south, so I could jump from channel to channel across different areas of shallow water, depending on the tide. I would put the engine in the fourth tilt position and go flying across shallow water, looking for deep spots by the different shades of blue and green and tan.

The tan usually meant I was about to come to an abrupt stop, and I would wish once again for power trim as I pushed or paddled the boat to deeper water. With the engine tilted to fourth position, the boat was prone to porpoising and rolling side to side at high speeds, and I could enhance the effect by steering a slight zig-zag course. It was a game of inches, and I learned over time how to minimize the amount of water required.

There was really no use for the first tilt position. I tried it, and the boat would plane quickly, but the ride was terrible and wet, with the hull breaking water up near the bow locker. 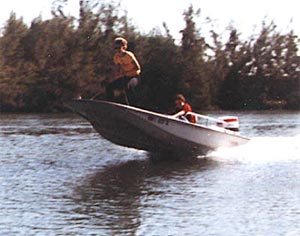 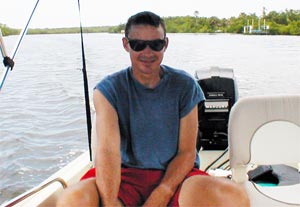 My current 15' Boston Whaler, sporting a 70hp Merc with power tilt and trim

There was, however, a use for the fifth tilt position. It would make the boat porpoise wildly and the engine would roar as it cavitated with each lift off. It was possible to make almost the entire hull jump out of the water, even in smooth water, just by tilting up and throttling up. If you happened to have a crazy friend who would jump up and down on the bow of the boat, it was even more fun.

Believe it or not, the bow jumper in the photo survived many years of boating with me, and has only been flung overboard on one occasion. He is now a professional captain and runs dive trips to swim with humpback whales on the Silver Bank of the Dominican Republic. I don't think he flings his passengers overboard.

I have been through a few boats since that 15' Whaler, and all of them lacked something I had had in the old Whaler. I eventually bought another 15 Whaler, this time with a 70 hp Merc with power tilt and trim.

More About Tilt and Trim