Morning coffee was enhanced by aromas from the galley of toast frying in butter, to be topped with the last remaining avocado I had brought from home, which was slightly overripe. We would have eaten it yesterday, and I intended to suggest that, but then Ginger had mentioned French toast, and I remembered that we had some cinnamon raisin bread. Mmmm. Those were some delicious breakfast feasts. 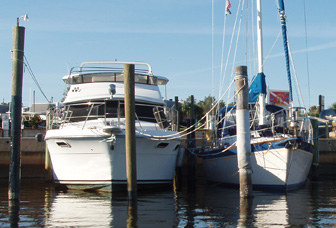 The Moorings Marina in Carabelle uses the "block it in with a piling" method of dealing with boats whose slip fees aren't paid. Above, Charlie K (on the right) sits next to the delinquent boat. 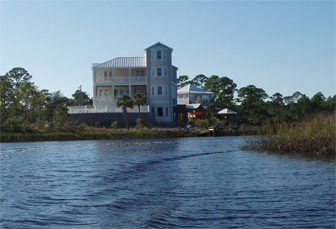 Some nice homes are being built on the creeks and bayous around Carabelle.

But there's still a lot of untouched Florida wilderness.

Our planned route changed at least twice a day in response to the weather. The current plan was to go into the marina in Carabelle, celebrate Ginger's birthday at a restaurant in town, and leave the next day for Cedar Key. On the 26th, another front was forecast to arrive in the area, and we figured we could hide at Cedar Key while it passed, then continue toward home on the 27th or 28th.

We went into the Moorings Marina in Carabelle after breakfast. A finger pier that stuck out all of 12 feet dictated that we once again back the Charlie K into the slip, this time in a strong crosswind and countervailing cross current. The boat got out of position when Jon tried to change on the fly from nose-in to back in, so I took the helm and went out to get a running start from an upwind position, since the current was fairly weak. I get plenty of practice at that kind of docking in the course of my work selling boats, and we got into the slip with no trouble.

It wasn't until an hour or two later that I noticed that the Carver 38 next to us, which clearly hadn't moved in some time, had a piling driven directly in front of it! He hadn't paid his slip fee, and now owed the marina for back rent, along with a charge to install and remove a piling.

Sonja and I went for a dinghy exploration, discussing yachting techniques and lessons learned on our trip the whole time. Some really nice houses are going in on the bayou around the bend from the marina, and we followed it to where it dumps back into the bay.

Lee, the dockhand here, had warned me not to attempt to go out in the bay and around thru the main channel, and I could see that he was right. Oyster bars and inflatable dinghies don't mix.

A Hot Shower, and a Good Dinner

In the evening, I went to the marina's shower facility and took a shower, followed immediately by another shower, both of which were badly needed.

Lee, the do-everything marina hand, also drove people to nearby restaurants in the marina's vehicle, which had a very amusing radio antenna that looked like a fishing pole! Lee drove us to a place called Wicked Willie's for dinner. Sonja reported that their shrimp was better than she had had in Apalachicola and Port St. Joe, both of which were very good. I had Alfredo loaded with local scallops. It was a generous portion, and very rich, so I ended up taking some of it back to the boat.

It was Ginger's birthday dinner, and she had shrimp. Jon had a "seafood dirigible" which looked good. It also looked like it had the potential to turn him into a blimp! The women had key lime pie for dessert, but Jon and I weren't interested.