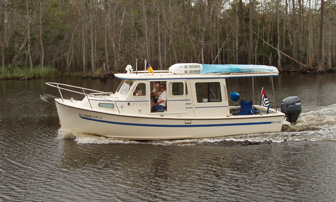 We passed many friendly boaters on our trips along the inland route. 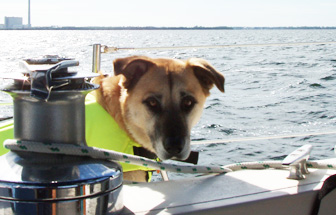 Nicki the Navigator has found her sea legs and is enjoying the trip.

Cold Weather, Even in Florida

I woke up around 6 am and it was COLD! Made coffee and checked the weather. Strong north winds were forecast to persist all day, switching to NE and slacking off by tomorrow.

We reconsidered our original plan to take the outside route back to St. George's island. Instead, we motored back up the barge canal, headed back to Apalachicola along the inland route. Our revised plan was to go to St. George's Sound and anchor near Carabelle, our destination for tomorrow.

We were toying with the idea of heading to the St. Marks River to try to get a little closer to home before another cold front approached the area. That would allow us time to hole up and hide while the weather passed, and still make it home on schedule.

We made excellent time via the inland route back to Apalachicola, averaging around 6.5 knots over ground, with boat speeds frequently up around 7 knots in Lake Wilmico under engine and jib. It was a good motorsail, and we found ourselves in Apalachicola with plenty of time to proceed to Carabelle if we kept the speed up.

Onward to Carabelle we went.

As we went out the channel from Apalachicola with Sonja on the helm, we bumped into some shoaling on the edge of the channel. I took a look at the chart, which showed depths of 6 to 7 feet through the bay, and decided it was a good time to demonstrate "Advanced Channel Corner Cutting Lesson 101" to cut off a mile or so of needless channel travel, and to keep us out in the bay and away from other traffic and markers.

It made Jon a bit nervous, as we typically had 1 to 2 feet of depth underneath us, but I am accustomed to having very little clearance under the boat, and was really only worried about any uncharted obstructions which the hurricanes might have deposited on the bottom. We did not hit anything, and had a nice sail across the corner-cut.

Back in the channel, we crossed under the big bridge just behind a large motoryacht, who courteously slowed down for us and the bridge, then went flying away at his more usual 20 knot speed. We encountered a tug pushing a couple of old fuel barges or something, then another larger tug pushing a large barge with 4 HUGE cement highway beams. It's always interesting to watch them maneuver in a tight channel.

A Near Blow-Down Makes the Freezer Go Flying

I was at the helm out in a pretty open section of the bay, cruising along at an average GPS speed of about 7 knots under the full jib and some engine power, and suddenly, a very strong gust hit us, rounding the boat up and nearly blowing it down. For the second time this trip, the freezer chest leaped off the seat where it lives and went crashing to the floor, and it looked like a bomb had gone off inside the boat, with stuff flung everywhere.

The new laminated imitation teak and holly sole in their boat looks great, and really demonstrated its value. A real wood floor would have a couple of ugly gouges in it after the heavy freezer landed on it, but there were no marks on the new laminate.

We found ourselves in one body of water, and wanting to move the boat over a spit of land with a ramp into another, lower body of water, but there was no lock. We sailed the boat up onto dry land, and were trying to figure out how we were going to get it down that ramp. I went off on a scouting mission, and found a warehouse full of frozen chickens. I somehow talked the warehouseman out of lots of chickens. I was bringing chickens back, and Jon was stacking them under the boat, with the legs interlocked with the back of the next chicken to keep them in place.

Once we had a sufficient stack under the hull, we figured some way to lift the boat and get frozen chickens under the shoe of the keel, and then we were ready to slide the boat down the ramp on our frozen chicken slide. I don't know if it ever worked, because Jon woke up at that point and told us about the dream. 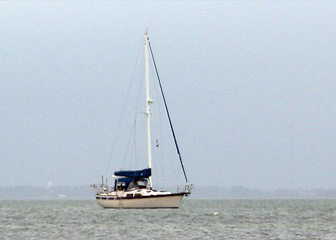 We Anchor Off Carabelle

Getting back to reality, we arrived in a little nook just west of the channel into Carabelle and anchored. Winds were still up around 15 to 20, and our anchor started dragging as everyone was preparing to have an anchor cocktail.

I was watching our backward progress against a nearby marker and on the GPS, and decided it was time to put out two anchors in a V pattern. Got my afternoon workout doing that, and felt a very satisfactory set on the plow anchor, which is seldom used on this boat. Our usual main anchor never did set correctly, but we left it out there anyway. I spent the next couple of hours eyeing the GPS suspiciously for any movement.

Sonja, our newly self-trained expert in the new Furuno chartplotter, set an anchor alarm at .02 nm, further easing my mind. After a while, with some good tugs in strong gusts, I became grudgingly convinced that we were hooked to the bottom for the night.

We had an excellent dinner of stuffed peppers and some very spicy green beans, and just before 9, I was ready to pass out. I slept like a stone under two blankets, dressed in sweats, and wearing the hood on my sweatshirt, until about 4 am, at which time condensation forming on the window above my head began dripping on me. Also, I found I was hot! I wiped the window down, shed the sweatshirt, and slept for 3 more hours.