You are here: Home / Sailing / Sailboat Cruising / Cruising Florida’s Panhandle — Part 11: Another Crossing From He**, and Home 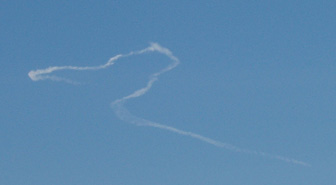 Was that jet doing aerobatics, or what?

Our last sunset of the cruise was really spectacular, and I took several pictures.

The Trip Home: We Decide To Make A Run For It

Our plan evolved once again in response to the weather, and we decided to take off on a straight line for New Port Richey in the morning. The cold front was not approaching as quickly as the original forecast had indicated, and we realized we did not have time to wait around for it to go by.

The sail out the bay from Carabelle was uneventful and smooth. Ginger made pancakes, and we enjoyed the last few minutes of protected waters. We knew with the wind averaging about 12 knots, and with a few small whitecaps, the Gulf would be a bit on the rough side once we cleared South Shoal, our last bit of protection from the E/NE winds. Sure enough, it was a bit bumpy out there, but not as bad as I expected.

For the second time this trip, I saw a weird jet contrail, this time it looked kind of like a question mark. What are airplanes doing out there, anyway? I'm a former flight instructor, and I keep an eye on the sky, but I had never seen the contrail "splash" we saw on the way up, and had never seen a contrail that looked like this one, either.

Conditions got gradually better throughout the afternoon and evening. Though we didn't have enough wind for pure sail power most of the time, we were motorsailing along under jib and double reefed main at around 6 knots.

Neptune Must Have Had It In For Us

Around 10 pm Wednesday, the brown stuff began to hit the fan again. Gusting winds on our nose brought larger seas, up to 4 feet, and our speed dropped. At one point during my night watch, we picked up a crab trap. Nothing seemed to change, but suddenly our speed dropped by almost 2 knots. Later, I think I mistook an increase in wind for another trap. We found ourselves pounding into waves, some up to 5', at a little under 3 knots average. It was a long, unpleasant night out in the Gulf.

Come morning, I left the cockpit and went back to the stern, scaring heck out of Jon and Ginger, especially when I refused a jackline or life jacket. I had no plans of doing anything that might result in a swim, and went on all fours the few feet from the cockpit to the stern rail. No traplines in evidence. I came back to the cockpit, reported my findings, and suggested we lean on the iron genny for all she was worth. A significant increase in throttle brought our speed up to 5 knots average, but also caused some pounding and a great deal of spray.

Water frequently flew over the doghouse and mainsail, soaking everything below the spreaders. We were once again grateful for the full cockpit enclosure on Charlie K. The weather stayed ugly until I went to grab some sleep around 10 am. At some point, it started getting calmer. I got back up at 2pm after a nice nap, came outside, looked around, and asked, "Who dropped us in a completely different ocean?" It was warm and completely glassy calm. I had been wearing two sweatshirts all night and all day, and suddenly was hot.

We Make It, Finally

A few hours later, we were tied up back at Jon and Ginger's dock behind their home in New Port Richey, unloading the boat. We had considered spending a night out in their home waters, since we had the time, but no one was really interested in hanging around in familiar waters for another day while waiting for bad weather, so we just declared the trip over a bit early.