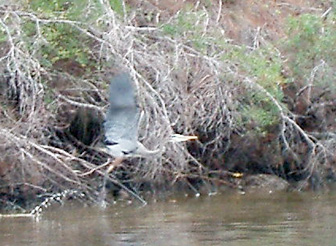 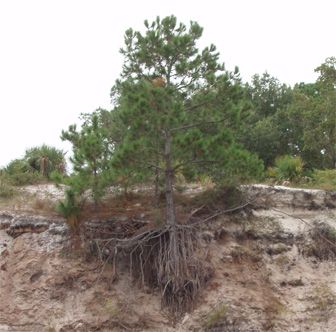 A pine clings to the bank for dear life 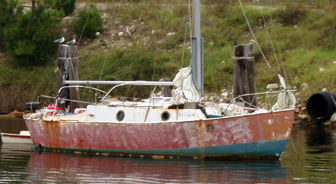 Winner of the junky boat contest — and there were a lot of entries on this trip! 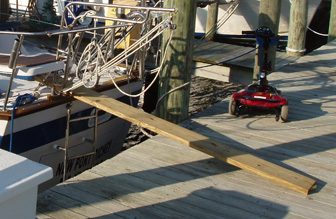 It was rough and crudely built, but this makeshift gangway did its job.

The bass fishermen began arriving at 6 am. It turns out there was a major tournament that week-end, so a steady stream of them launched and zoomed off from the 3 boat ramps for about two hours.

I would hate to be a bass around here. You could almost walk down the river by jumping from bass boat to bass boat, if only they'd hold still long enough. Holding still is not their strong suit. Most have engines that weigh more than the boats to which they are attached! I love bass fishermen!

The trip up Searcy Creek and through the barge canal was a fairly dull ride, with the same scenery the whole time. I did manage to catch a pretty good shot of a Great Blue Heron taking flight.

Other than that, we were looking at the carved sand walls of the man-made canal, with the occasional tree clinging to the eroding banks. We also went by the hands-down winner of the junky boat contest. See the photo at left.

We Arrive at St. Joe Marina

In the afternoon, we arrived at St. Joe Marina in Port St. Joe. It is a really, really nice, new facility, complete with a strong wireless internet connection. Cool!

Sonja and I took a little walk down the street, and found a Piggly Wiggly next to a Bluewater Outriggers, which is a great hunting/fishing/sporting store. Wish we had one of those in Charlotte County. The closest thing we've got is Wal Mart, which isn't very close at all.

Ginger had some trouble getting on and off the boat at the docks. We asked the dockmaster for a piece of wood, which we used to fashioned a crude gangway. We lashed it to the dinghy davit support strut, and put a small pad to protect the toe rail finish.

The boat had gotten pretty dirty, so I went after the exterior with a hose and scrub brush while the others straightened things up and cleaned inside. Another wonderful part of cruising — cleaning the boat in exotic places. Well, it isn't all that wonderful, but it is nice when you're done.

Dockside Cafe Lives Up To Its Reputation

We had some cocktails on the boat, then went over to the Dockside Cafe at the marina for dinner. There was not a very large selection on the menu, and I began to wonder whether we had made a mistake in coming. The calamari that Sonja ordered didn't look that great. Looks are deceiving sometimes, and that was sure the case this time. Outstanding calamari, very tender and tasty, with an excellent dipping sauce.

Ginger and I both had steamed oysters w/butter, garlic and cheese. Heavenly is I guess the next descriptive term above outstanding, and that's what it was, as was my oyster po boy. Everyone we talked to had recommended that restaurant, and I recommend it highly as well.