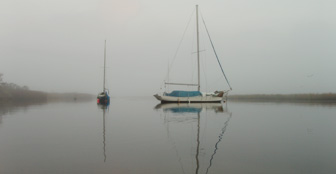 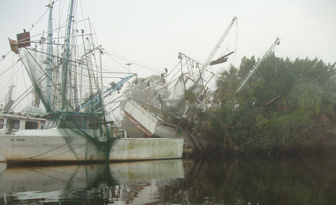 Sunken and derelict commercial fishing boats were a common sight along the waterway. 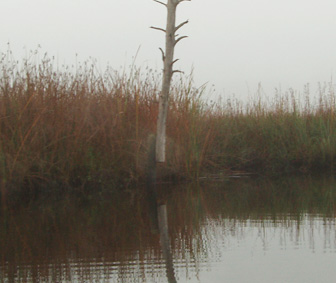 A cypress appears to be levitating above the water. It was actually bolted to a piling, and had a bird house for the sanctuary's pileated woodpeckers. 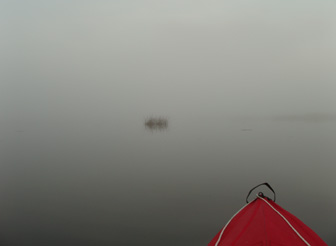 The fog was thick in the bayou that morning. 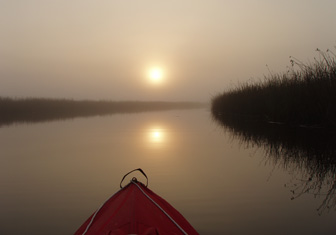 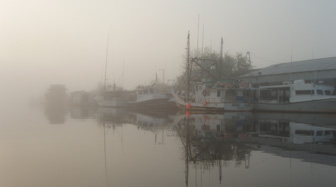 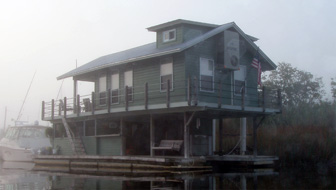 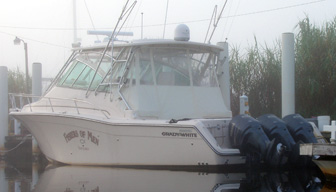 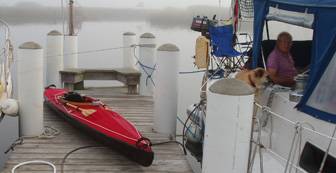 Back from kayaking, time for morning coffee.

Kayaking in the Bayou

I got up before dawn to make coffee, which was needed as a bribe to get Sonja to help me get my kayak off the Charlie K and onto the dock. The wireless internet network available at the marina was a nice surprise. The previous night, I was able to pull up a satellite photo of the area from Google Maps, and I found that Scipio Creek has a small bayou off of it, with an entrance at each end, so I had decided to go take a paddle through it.

Like the rest of Apalachicola, the creek had sunken fishing boats and anchored derelict sailboats in it, but not much life. Just some mullet and some bird life. Once I got past the developed area, the glassy creek winding through the marsh in the silent pre-dawn mist was just beautiful.

I did not know it at the time, but I was entering a bird sanctuary area. Along the way, I saw some man-made bird houses, complete with raccoon/snake protection, and I also saw a cypress tree that appeared, at first glance, to be just another dead cypress standing along the shore, only it somehow appeared to be levitating above the water.

When I got close, I saw that in fact someone had bolted the tree to a piling driven into the shore line. I guess it's for the pileated woodpeckers.

When I entered the little side bayou, one look told me I had better hug the shoreline if I hoped to find the exit on the other side. The fog was thicker in that area, making a little gap in the marsh grass almost invisible from a distance.

As I left the bayou and re-entered the main creek, the sun rose above the layer of mist shrouding the swamp, and I got some really nice pictures of the sunrise.

Coming back into the marina area, I passed an assortment of commercial fishing boats, then a large houseboat built on a pontoon barge tied up right next to a nice, new Grady White with 3 250 hp outboards.

I got back to the quiet marina after an hourlong paddle and hauled my kayak up on the dock. The rest of the crew of the Charlie K was still enjoying coffee in the cockpit.

Into Town for Provisions, Then Hiding From the Heat

We went into town for breakfast and then went to the Piggly Wiggly for chocolate. Oh, and I guess some other stuff was bought as well, but I didn't care about any of that. Came back in the heat of the day, and I hid in the air conditioned cabin and read a book for a couple of hours.

Later that afternoon, we tackled the rigid boom vang situation. We wound up drilling out the boom and the saddle on the boom vang, and using some new, larger stainless bolts to tap new threads into the boom.

Unfortunately, the previous installation had some slop in the saddle, and our new one had none, which meant that 4 out of 6 holes lined up, another lined up with some difficulty, and the last one was not even close.

We had an installation which was probably a bit weaker than the one that failed, but it actually might be a bit stronger, depending on how we did with the new threads I tapped. With no slop in the system, the bolts were very tight going in, so it was hard to tell if I was crossing the brand new threads, or if it was just plain tight.

At any rate, our boom vang was in business again. Now we had both a working compass light and a boom vang. Yay for us!

Into The Bayou Again, and Oysters for Dinner Again

After that was done, Ginger, Sonja, and I went for a little dinghy ride up Scipio Creek, exploring a narrow side creek a little ways up which had some really nice docks and houses along it, up toward higher ground. There was also a small work barge up there with a pile-driving rig on it.

We dinghied home in the fading light of dusk, and went back to the marina restaurant for dinner. I had already tried the oysters on the half shell and soft shell crab the night before; tonight I went for the oysters Rockefeller, one of my all time favorite dishes.