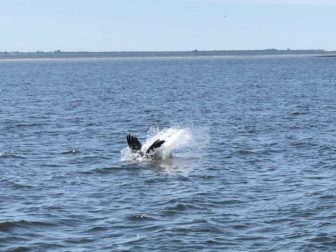 We did a lot more fishing than catching last week in Turtle Bay, but you know what they say about a bad day fishing! While I was soaking a shrimp, the Pelicans were having a banquet! 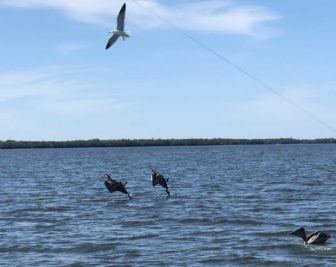 Some of them did some really aerobatic dives, like these two Jonathan Livingston Pelican candidates. Most of them seemed to have a seagull escort that would land right in front of the pelican after it dove. I guess pelicans are pretty reliably messy eaters but I did not actually see this strategy pay off. 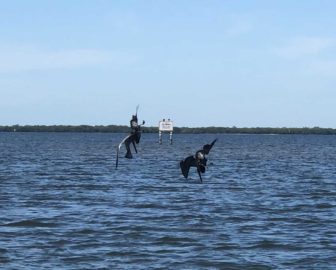 I happened to get the two bald eagles sitting on the speed limit sign in the background of this picture. 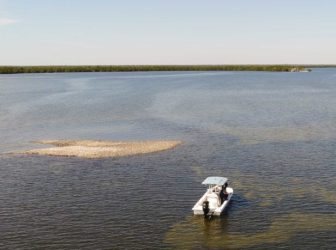 We left the mouth of the bay, where the pelicans were feeding, and tried out luck out near one of the oyster bars in the open part of the bay. I continued to soak shrimp without results, got bored, and flew my drone for a while. 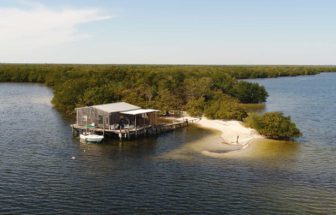 Flew over for a closer look at the fish shack that appears in the background of the above picture. 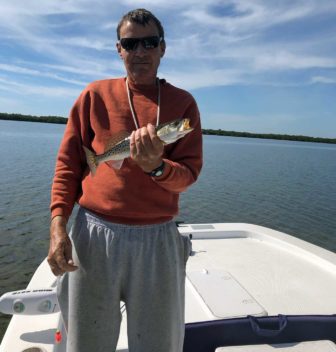 Oh yeah! The fishing! My wife caught a few spotted sea trout, one of which might have been a world teeniness record contender, and a small lizard fish. I caught this one trout and that was it. Trout have to be 15-19 inches when they're legal to catch, which they are not until 2021 due to a red tide-related closure of the fishery. I didn't measure it but am pretty sure that one was not a keeper for those two reasons.