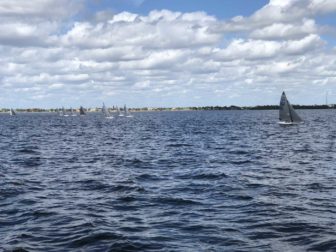 Inspired by WaterTribe members who have spent the last few months doing a training Derby for the upcoming Everglades Challenge, I decided to do a trial overnight camping trip on our pontoon boat. My goals were to test my ability to charge up all the electronics I intend to carry and to figure out what I may have forgotten on my packing list. I chose Turtle Bay as my destination because it's a protected place to anchor overnight and because I wanted to become more familiar with it.

On the way down the harbor, I spotted a group of 2.4 mR sailboats having a race, which caused me to realize one piece of equipment I forgot: binoculars. 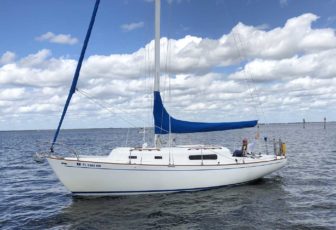 Passing by the entrance to Ponce channel into Punta Gorda Isles, I saw my friend Tom covering the mainsail on his beautifully-maintained old Morgan 30, Whimsy. I stopped to chat for a moment and took the picture at left, mostly just to prove to friends that Whimsy's mast is occasionally vertical. 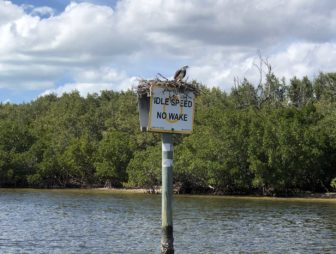 I took the shoreline entrance to Turtle Bay, running along the southern tip of Cape Haze, and my presence wasn't particularly appreciated by the resident Osprey on the no wake sign, who was giving me the stink eye. 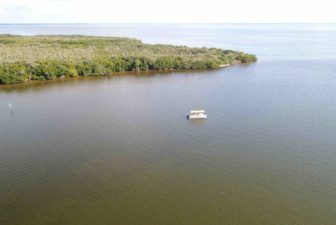 Once around the corner and inside Turtle Bay, I dropped the anchor to fly my drone a bit. The bay has lots of shallow areas and the chart leaves a bit to be desired in terms of detailing the depths, so I wanted to use the drone to do a bit of scouting. I also just wanted to use up one of my three drone flight batteries so I could evaluate my charging system. 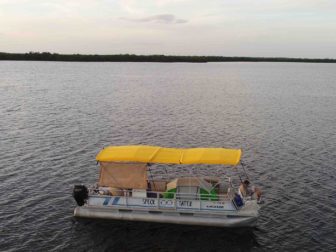 Even with a polarizing filter on the lens, I found that the drone is not a great tool for scouting shallow water. While I could see exposed bars and extremely shallow water pretty well, it was nearly useless for determining whether I was looking at a foot of water or two feet. In a foot of water, the hulls are aground or close to it. In two feet of water I can idle along slowly without stirring up any mud. I resorted to the old fashioned approach and idled up the eastern shoreline of the bay, alternately staring at the depth finder and looking around at the color of the water to determine depth. I learned that the couple of spots in the northern part of the bay where the chart shows 2 feet of water don't really have that much. It was about two feet deep up there, but that was with about a foot of tide. At low tide I would have been aground.

With sunset approaching, I worked my way down to a spot in the northern bay where the chart correctly shows 6 feet of water, anchored, and set up my tent on the foredeck. In the picture at right I was hanging out on my "front porch" to do a little more drone flying before it got too dark. 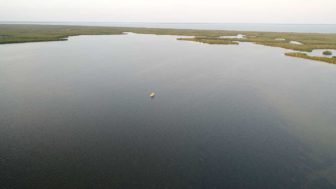 A wider shot of my chosen anchorage area in Turtle Bay, with the upper bay and Charlotte Harbor in the background. 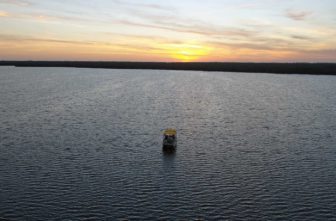 And a sunset picture as I was bringing the drone back in for the night. 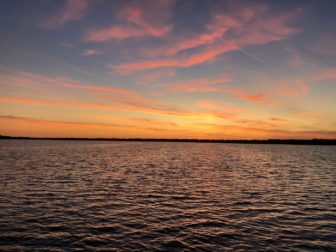 The sunset kept getting better after I put the drone away. 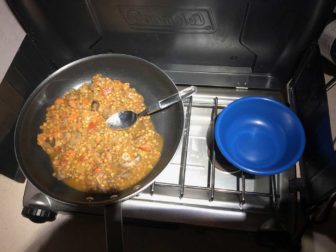 As it got dark I broke out the camp stove to warm up some delicious lentil soup with mushrooms and chorizos. 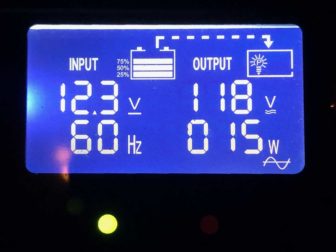 I had a drone battery charging off my new inverter while I ate and took the picture at left as it was finishing up. I bought a Gisian brand 300 watt "true sine wave" inverter after experimenting with a much cheaper one designed for cars. The cheap one wasn't powerful enough to charge a drone battery, though it could do everything else I needed. The Gisian inverter received a few reviews online indicating they have a bit of a quality control problem but most were positive so I took the plunge. I installed a new power bus bar right next to the boat's main battery switch and wire directly into it.

I really like the display because it shows the voltage of the battery and the watts of output. A discharged drone battery resulted in the voltage dropping to 11.8 and about a hundred watts of output. As the battery approaches full charge, the output rate goes down and the indicated voltage of the battery comes back up. Once it is showing 10 watts or less, it's very close to a full charge. This gives me a more accurate idea of how much longer it will take than the blinking lights on the drone battery. 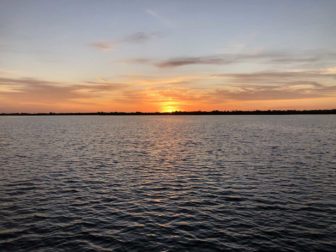 The sunrise over Turtle Bay was nearly as good as the sunset the night before. I had forgotten how good coffee from a camp stove can be. It's more trouble than my Mr. Coffee but tasted better. 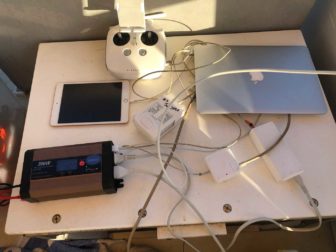 While enjoying my coffee, I ran a simultaneous charging test. With one of the boat's batteries already run down a bit from overnight use, I hooked up the drone charger to the inverter and (against manufacturer recommendation) plugged it into a drone battery and the drone remote control. The other inverter AC outlet is being used to charge my MacBook Air. Meanwhile, one USB outlet is being used to charge the iPad Mini that is used as a display on the drone remote. The other USB outlet with the cord heading off into the foreground was run to my iPhone, which I used to take this picture. With all those things hooked up simultaneously, the inverter showed 135 watts of output and the battery voltage dropped to 11.7.

After charging everything up, I used that battery to start the engine. One of the things I had been wondering was whether I could charge a couple of drone batteries and some other stuff and run the boat's lights all night without having to change to the fresh boat battery to start the engine. It did work, but I also experienced a still-unexplained failure that cut power to my GPS and tachometer. I fiddled with the main power bus under the console a bit and couldn't find any problems, then the problem mysteriously disappeared and all was back to normal.

Overall the trip was a success and I feel more prepared for this weekend, when I plan to camp overnight on the boat near Stump Pass to watch the WaterTribe Everglades Challenge participants as they approach their first checkpoint.