You are here: Home / Boat Repairs & Upgrades / Reviving The Stray Goat
This entry is part 1 of 4 in the series Goat Island Skiff Restoration 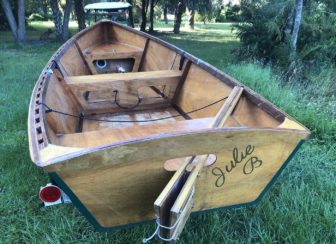 A couple of years ago, the Goat Island Skiff Julie B was donated by her builder to the Charlotte Harbor Community Sailing Center. The intent was to sell her to some lucky sailor and use the proceeds to help support the Center's programs. What actually happened was that she sat upside down out in the weather for a year or so, slowly deteriorating and attracting no buyers. It was painful to see every time I visited the Center because I'm a fan of the design. Eventually, the people at the Sailing Center decided to give her to me because I have a spot underneath my stilt house that is fully protected from sun and rain.

And there she sat for about another year. I bought a trailer and moved the bunks to fit the boat but made no other progress. My intention was, and remains, to restore the deteriorated and damaged bits, do a little sailing because I have long wanted to try sailing a Goat Island Skiff, and then sell her and donate the proceeds to the Center. This project has finally bubbled up to the top of my "to do" list.

There are a number of problems with the boat, all of which seem to me to be within my limited woodworking abilities to fix. I think it will go better if I get some input from internet friends who have far more extensive experience building and repairing wooden boats and doing other wood working. Meanwhile, if any sailors wish to skip right to the end of the story and buy the Julie B to benefit the Sailing Center, please contact me with a reasonable offer! 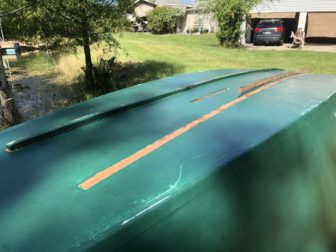 While sitting inverted in the Sailing Center's yard, the two keel strips on the bottom of the boat began to delaminate. This problem became worse when I used my wife's skiff trailer to bring the boat home. The bunks were at just the wrong distance apart and one keel strip came off completely and broke, losing a piece someplace on the road. The other mostly finished delaminating. 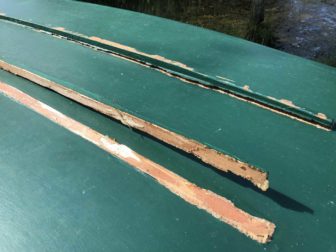 This pic shows how the aft end of the keel strip is also separated from the hull. The problem here is that the middle section of that strip still seems firmly attached. To put it back on, I must first finish taking it off and I'm afraid I'll tear out some of the bottom of the boat in the process. 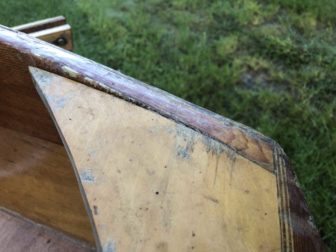 The corner pieces on both sides of the boat have delamination problems too. In the pic at left, the port corner piece is separated from the transom. 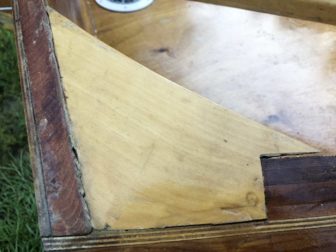 In the pic at right, the starboard corner piece is not quite attached to the starboard rail. It looks like there may be some separation from the transom too, but not as bad as on the other side. 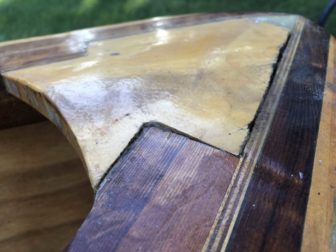 There's a similar issue up at the bow of the boat, as the pic at left shows. 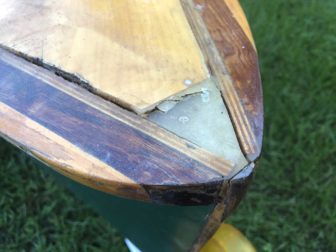 The vertical strip where the two sides meet appears to be starting to come free at the top. 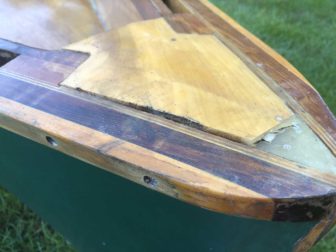 Unfortunately, one of the volunteers at the Sailing Center decided to attempt to fix the bow delamination with a couple of screws, which are now locking the piece in the wrong place. 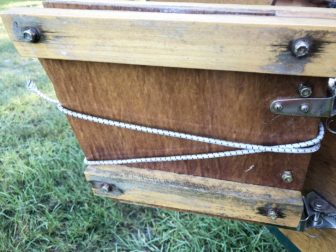 The rudder case is showing some rot around the bolt holes. 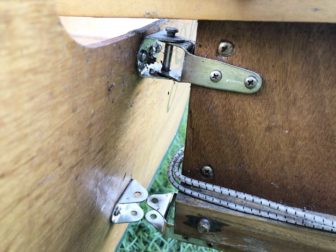 When I pulled the lower rudder case pin (with some effort and some pliers), the case sprung out away from the transom a bit, indicating poor alignment. 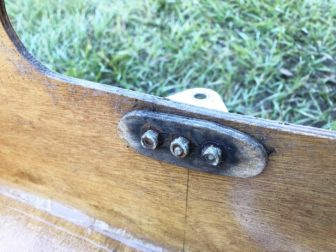 The backing plate on the inside of the transom looks too small to me, in addition to showing rot and having bolts that are a bit too short. 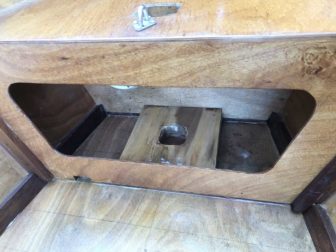 I guess the builder intended to only bail when on a starboard tack? The bow bulkhead has a drainage hole cut into it, but only on the port side. 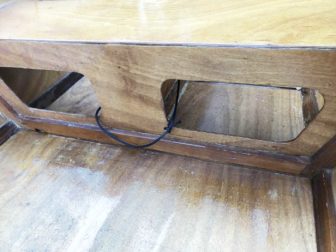 The bulkhead under the center seat has the same feature, as shown at right. It can hold a puddle on the starboard side of the daggerboard case but not on the port side. In both cases, I'm wondering how I can make a hole on the opposite side without damaging anything in the process. 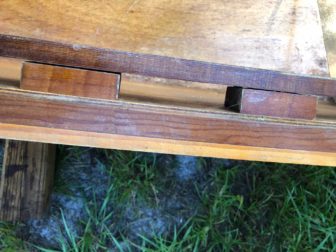 I think those little chunks of wood along the railing have some sailorly name but I can't think what it is. Anyway, many of them show a gap on one side or the other. That doesn't seem right but I'm not sure what to do about it. 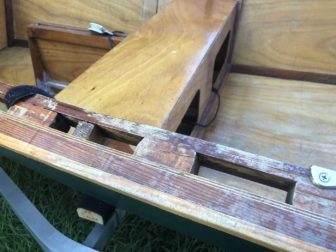 Most of the other issues with the boat fall into the cosmetic category to me. It looks like only two or three coats of varnish were originally applied and they've worn thin or worn off in places, as shown at right. 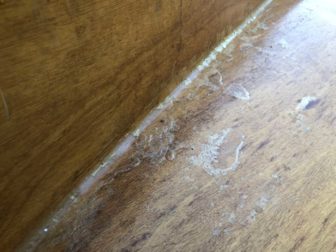 The top coat of varnish is also peeling in other places, as shown at left. 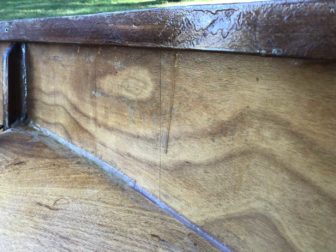 There are also some runs and sags in places, as shown at right. I think some of those are epoxy from the build and others are varnish. 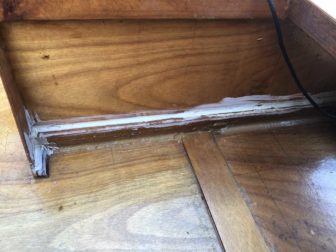 And then there's the fairing on the port side of the daggerboard case. I'm guessing maybe it cracked and this is a repair? It can't be intended as cosmetic work. I can't think of a way to undo it so it will likely stay that way. 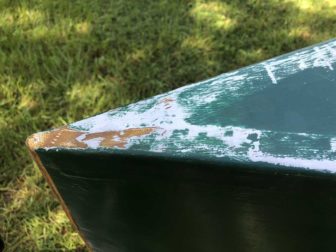 The paint has numerous scratches showing the white primer underneath on the sides and bottom of the boat. It's worst at the bow, where it appears the boat was beached often enough to scratch all the paint and primer off. 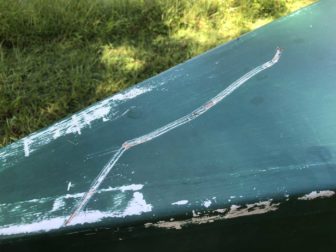 Ouch. This is by far the worst scratch. In a couple of places along it, small chunks of the plywood veneer on the bottom of the boat are missing. If I put the boat in water in this condition, there's nothing to prevent the bottom soaking up water and starting to rot. I'm surprised it did not rot while sitting out in the weather at the Sailing Center but I can't see any evidence of rot. 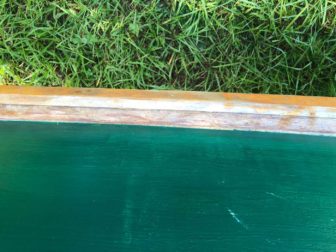 The varnish is pretty much gone on the undersides of the railings all around the boat.

The Julie B was the first boat this builder made. She's far from perfect but should be a fun boat for someone. I think the problem with selling one of these boats is that there are two kinds of people who want them. There are the kind who really don't want to own and use a boat, they want the experience of building one, then there are the kind who want a built one, but want it built to perfection by an experienced boatbuilder. This is not the boat for either kind of person, for obvious reasons. I'm hoping to find that third kind of person, who just wants to own and use a fun sailboat.