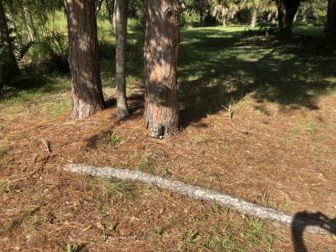 I walked by my trail camera a week or so ago and noticed it was down by the base of the tree, not strapped to it at knee height where I had left it. I wondered how it could slide down the trunk of a pine tree, then noticed the face of it was cracked and noticed the nearby large branch and figured out what happened.

The branch fell and gave it quite a wallop, knocking it to the base of the tree, shattering some of the glass over the LED flash bulbs, and cracking the plastic case. I brought it inside and went to release the battery tray, only to find it was already loose.

The picture shows the old camera where I found it, the new one strapped to the tree in the shadow, and the offending branch still waiting to be hauled away. 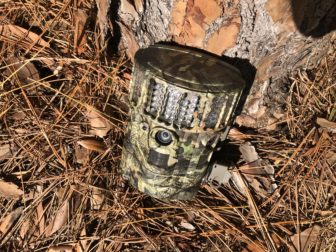 The pic at left is a closer view of the old, smashed camera. Today I put the batteries from the old camera into the new one and tried to fire it up but it didn't work! No power. Closer examination revealed that some of the AA batteries had been smashed enough to not make contact with the conductors in the ends of the battery tray. The positive pole still stuck up enough to contact the negative side of another AA battery so I was able to arrange them such that the smashed batteries were touching another battery and it worked.

The new Moultrie 180i has a different back-light on the display and it's not as easy to see in sunlight. The new one is also "Moultrie Mobile" compatible, meaning it has a cellphone built inside so you can access pictures through the cell network. The cheapest plan for it was $65 so I will just continue to get the camera card manually.