You are here: Home / General / Off Road Eglu Chicken Tractor 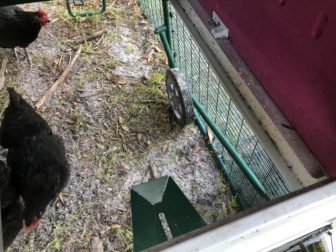 I found a used kayak dolly that I wanted on craigslist the other day and went down to Bokeelia to buy it. The seller was somehow able to quickly identify me as a person who can't say no to trash and as I was leaving he said, "Hold on a second. I got something else."

The "something else" was another kayak dolly, a broken one. So, trash. I gratefully accepted it.

Another useless thing to adorn one of the shelves in my sheds. How could I refuse?

I looked at the tires on it and thought, "Those might just fit the Eglu chicken tractor!" As shown in the photo at right, the Eglu came with some pretty skinny tires and they kind of bog down when I go through sand, making it hard to push. 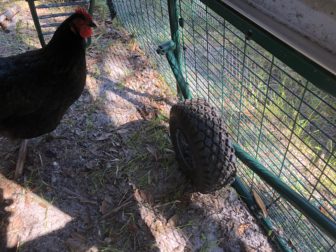 I was hoping for a quick swap, but things didn't go that easily. The shaft size on the tractor was smaller than the one on the broken kayak dolly. I first attempted to fix this using a small piece of PVC pipe as a bushing. It was the right exterior diameter for the new tires but the wall thickness of the pipe was too much so the interior diameter was too small to slip over the tractor shaft. I hunted around my rather extensive junk collection, looking for something else to serve as a bushing. I couldn't find anything that was quite right but did find a piece of small black irrigation hose that was almost right, just a bit too big in diameter to slip inside the new tires. I solved that problem by slicing out a sliver of the hose until it was a perfect fit.

That worked but my problem was still not over. The pins that Eglu provided to lock the tires in place were too long and could not be inserted into the shaft hole. Solved that one by putting them in a bench vise and hammering down the offending part. I installed the tires and found that the other end of the pin was still a bit too long. After the pins were inserted, the long end hit the tire valve stem. Bolt cutters solved that problem, shortening the pin end by 1/8 inch or so.

The new tires should roll over rough terrain a lot better but they do look like they'll drag a bit on the arms that hold the shafts. I'll find out tomorrow morning when I move it. If that's a problem, I think I can insert a couple of washers as spacers to move the tires away from the arms.