I saw that the wind forecast for yesterday included gusts in the mid-20 knot range and figured this might be one of my last opportunities this year to sail my Adventure Island in the harbor while the water is warm enough to get very, very wet and still have fun doing it. Lots of Florida sailors stay home when the wind gets above about 20 knots but I knew that my friend Tom Scott would be out sailing his old Morgan 30, Whimsy, if he could. I called him to let him know I'd be out in the harbor but did not hear back before leaving the dock so I didn't bother keeping a camera handy. 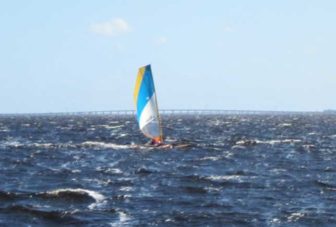 I sailed from Ponce Park and went South along the flats for a mile or so, sailed up onto the flats to see if it was deep enough. It wasn't and I headed back north. Continued past the park and headed out to Marker 2 in the harbor. It was wet and wild outside the protection of Punta Gorda and I was soaked and smiling. Turned back South from Marker 2 and noticed that my mast was working its way up off the pin in the bottom of the hull that holds it. Not good! I furled the sail and wiggled the mast back down into place and engaged the lock. I was pretty sure I had done that at the boat ramp. I was headed back to the park to go home when I saw a sailboat heeled over so far that it could only be Tom Scott. He had his camera handy and probably snapped the picture at right about the time I saw him. 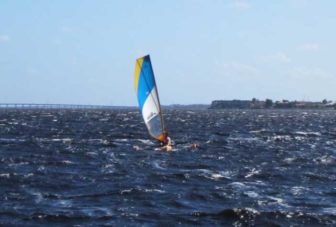 I headed downwind toward Whimsy and surfed down some of the bigger waves. Surfing the harbor chop is too much fun! 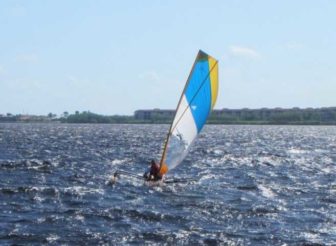 When an Adventure Island surfs to the bottom of a wave, it tends to dive into the next wave, only rising after the foward third of the boat is under water. In the picture at right, Tom almost caught this moment. 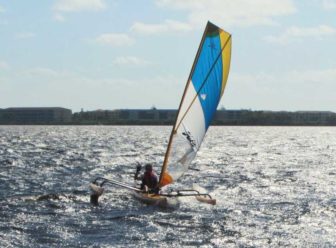 Tom got a nice pic as I approached Whimsy and waved. I quickly furled the sail a bit so I could chase him upwind. He can point higher but I was keeping up pretty well when I noticed that my mast was once again trying to work its way free. I decided to head back to the park. We had gone far enough upwind that this meant turning back down so I wanted to let the whole sail out but didn't dare doing that with the mast teetering on the edge of the pin. The boat was underpowered on that point of sail and when Tom turned Whimsy down to match my course he went steamrolling right on by pretty quickly.

I had other things on the agenda so I bade him farewell and sailed on up to the park. When I got there, the wind was blowing in the mid-20's straight out the channel and the tide was going out fast and there were fishermen on the pier so tacking on into the boat ramp was not an option. I furled the sail and got a good workout using the Mirage Drive to go the last couple of hundred yards. 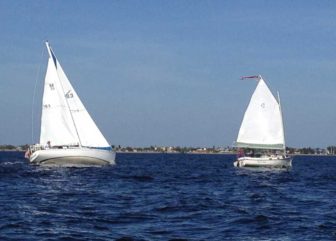 Although I didn't have my camera handy yesterday, I do have plenty of pics of Whimsy so here's one of my favorites showing Whimsy overtaking the Horizon Cat Good Juju, owned by our friends Charlie and Isy.