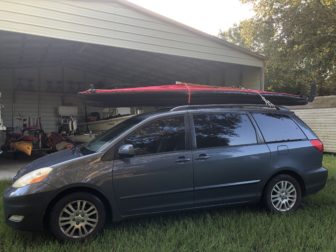 I paddle my Klepper more often than I sail it because adding the sailing stuff takes time and the leeboard brace takes up cockpit space. It is fun to sail in the right conditions so when I saw a good weather forecast coming up I decided it was time to get it salty. Mission Accomplished by about 8 am! I started assembling the boat around 7:30 on the cool concrete in the shade of the Boatport and by the time it was up on the car it had a pretty fair amount of my sweat all over the boat. This is why anyone who can afford to leave Florida in August does so. 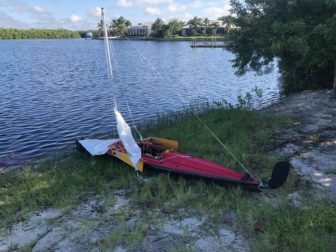 It was almost 9:30 before I got the pets fed, got to the park, assembled the sailing kit, and parked the van. This is why my plastic kayaks get a lot more use: the work to play ratio on this boat is just horrible. Part of the price of having a sailboat that can fit in the back seat of any car or be checked as luggage on an airliner. 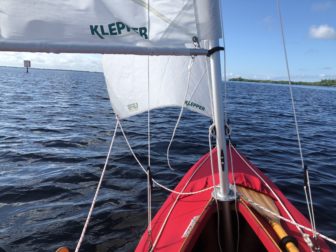 The kayak hull is easily driven so the "right conditions" for me means around 8 knots of wind. That's strong enough to really feel the sails through the sheets in your hands, especially if you forget to bring gloves, but light enough that any gusts probably won't mean a capsize. 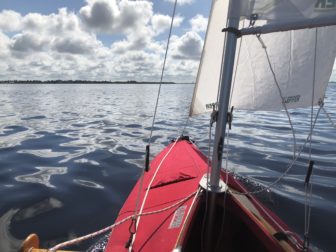 Because "probably" not capsizing includes a chance of going swimming, I'm really not interested in sailing this boat if the water temperature is below 80. The upside of breaking a serious sweat by doing light work in the shade at dawn is that August in Florida means the water is warm. I can wind up taking an accidental swim and still call it fun. 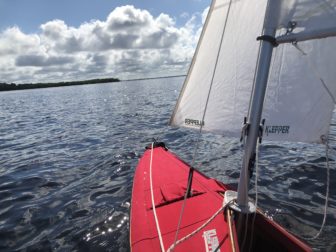 Conditions were great for taking a couple of nice reaches out Alligator Bay. Wind was mostly from the North but shifted a bit east as I was heading toward Grassy Point in this picture. With a high tide I could sail anywhere in the bay without worrying about the shallow parts. 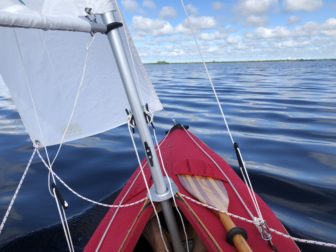 I got near enough to the eastern shore that the land was starting to interfere with the wind so headed back west and had a nice sail out into northern Charlotte Harbor. 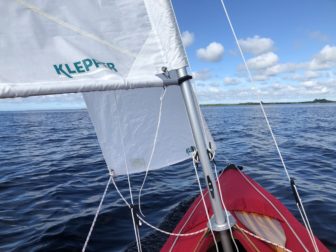 Ahh that's better! I spotted a fleet of a dozen or more kayaks paddling out Alligator Bay as I sailed across the mouth of it. 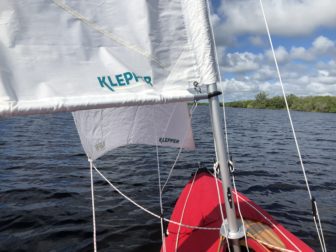 I was wondering if the kayak fleet would be able to keep up as I sailed along the beach on the northern edge of Charlotte Harbor. They rounded the corner and immediately stopped and began picking up trash, so I didn't learn the answer but good for them! 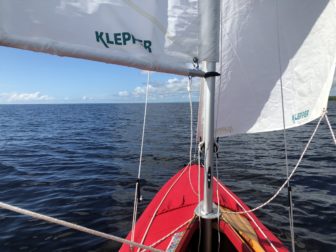 The wind coming around the point turned from a reach to a run so I got in a little wing on wing sailing going along the beach. 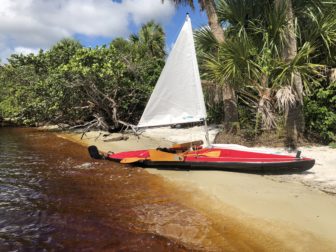 I was starting to get uncomfortable and went ashore to stretch and relax in the shade a bit before heading back home. The trip home took a while because the wind went light and from the north, which was not much help in sailing up Alligator Bay. The falling tide made it worse and I spent a fair amount of time paddling and paddle-sailing. The mainsheet and leeboards get in the way of effective paddling so it was a bit of a struggle to make any progress against wind and tide. 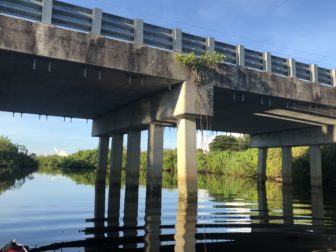 Because the work to play ratio on this boat is so abysmal, I try to take it out at least twice each time I assemble it. I took a morning paddle up Myrtle Creek to have a bit more fun before taking the boat apart and putting it back in the air conditioning.

Passing under the Loop road bridge, I saw this example of the nearly lost art of Bridge Bonsai. 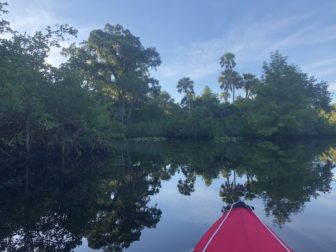 There was almost no wind and the trees broke up what little there was, resulting in a nice, glassy surface for tree reflections. 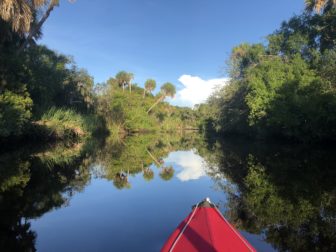 And reflections of thunderstorms out in the Gulf that were headed my way. 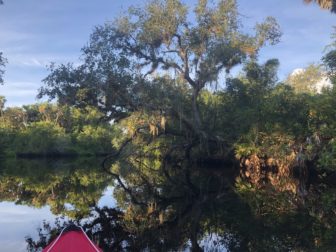 Tropical storms and erosion have taken out several of the larger oak trees along the shore. I used to see wild orchids in those trees but stopped under each one and did not spot any. 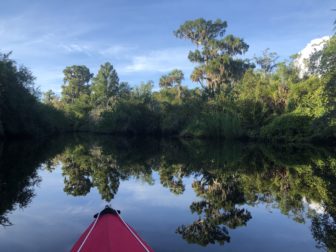 There are some giant cypress trees along the way. My guess is that these were just small enough to ignore when 20th century loggers cut down most of the big ones in the state for lumber. 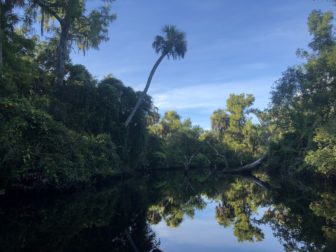 I like Myrtle Creek for summer paddles because it gets narrow and has large trees so there's almost always some shade to be found. 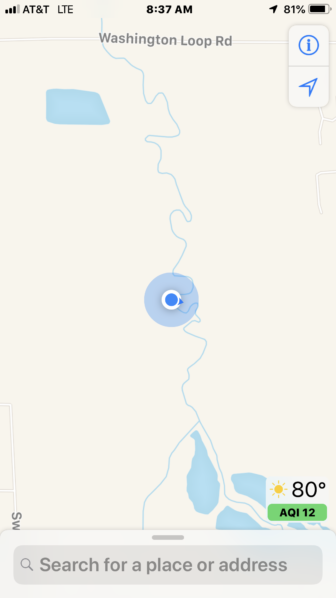 I took this map screenshot shortly before heading home. I made it about 2/3 of the way from the Loop Rd bridge to the reservoirs. The picture doesn't show it, but it is possible to paddle into the reservoir at most tides. There are lots of trees in the way, the remains of a small concrete dam, and irritable neighbors who will call the cops if they spot you, but it's possible. 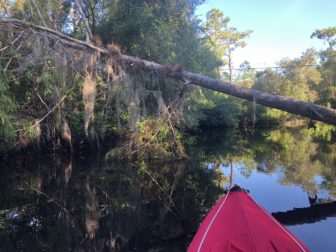 The oaks and cabbage palms along the shore eventually fall in the water when erosion undermines the banks. Cypress trees are far less vulnerable but something toppled this one. 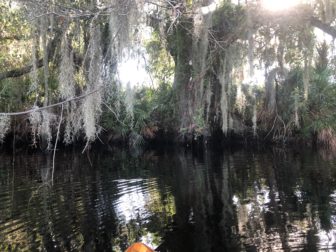 My favorite overhanging oak tree. It's huge and provides a nice, shady rest spot no matter where the sun is. I have never spotted an orchid in it. I hope it stands a long time before falling in the creek.