You are here: Home / Boating Fun / Remembering The Thunderboats

The Day The Thunderboats Died 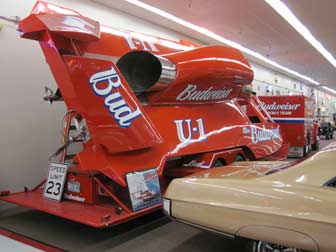 The Miss Budweiser Hydroplane, shown here on display at Muscle Car City, was recently listed for auction on eBay.

We saw this Miss Budweiser Unlimited Hydroplane a while back at Muscle Car City, looking a bit out of place along the back wall of the old Wal Mart building, completely surrounded by collectible cars, with not a boat in sight. I kind of wondered what it was doing there, and I guess the owner has come to wonder the same thing, as it recently appeared for sale in an eBay auction.

The likely departure of the boat from our area brought back memories of watching the hydroplane races in the Miami Marine Stadium as a youngster, and of how these turbine boats came on the scene and caused the whole scene to leave.

Most of the old "thunderboats" back in the 1970s and early 1980s were powered by Rolls Royce Merlin engines, the same ones used to power the P-51 Mustang aircraft. When a group of them opened up the throttles, the ground would shake under your feet if you were nearby. We could hear the time trials from school classrooms in Coconut Grove, several miles away, and we went to the races every year. We usually went by boat and anchored off the entrance to the Marine Stadium. One year we got there early enough that local law enforcement designated us the "pin boat" for the safety escape lane. That meant that if a barely-in-control driver had to actually use that lane, we would be the target he had to miss. It was a huge honor.

I remember the first year that we saw a turbine-powered unlimited hydroplane race in the Marine Stadium. It was the 7-11 boat, and some friends and I had managed to get there for the time trials the day before racing. We sat on the shore on the north side of the Marine Stadium and watched as that boat went whining around the track, making a really cool new noise and accelerating with unbelievable speed. Watching the rest of the old-fashioned piston-powered hydroplanes qualifying suddenly seemed a bit boring. We wanted more turbine boats, and could not wait to see what the new beast would do against the old guard in the real races.

My recollection is that the 7-11 boat was in it to win it right up until the first turn, at which point the turbine intake swallowed another boat's rooster tail, the engine flamed out, and we saw no more of them after that. Recollections are often inaccurate, but I know that the early turbine boats did not deal well with rooster tails, especially in salt water. We were disappointed that the new technology was not working out. Our disappointment was only beginning.

As time went by, the engineers figured out how to solve the rooster tail problem so that the boats could take a big gulp of water and still keep going, but that solution spawned a couple of new problems for Miami hydroplane racing fans. The first was that the new boats were so fast, and the arena so small, that they really just did not fit any more. There was not room to race them. The second was that while it is possible to make a jet engine continue to run after inhaling a large amount of salt water, it is not possible to make the jet engine actually like it. Jet engines are expensive and salt is highly corrosive. 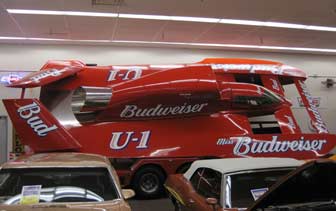 The bottom line was: no more unlimited hydroplane racing in the Miami Marine Stadium. I'm sure there were a number of factors. The fan base in South Florida was not that large, the liabilities of putting spectators along escape lanes are intimidating, and Miami is a long drive from other hydroplane racing venues. But I think the main ones were that the Stadium is too small for the boats, does not seat enough people, and the salt wreaks havoc on the expensive parts of the boats.

So farewell to one of the turbine powered Miss Budweiser hydroplanes, but I can't say I will miss her all that much. The last turbine powered hydroplane to which I became attached was the old 7-11 boat, and that lasted one day. I miss Dean Chenoweth and the THUNDERBOATS!

Newer: Sailing the Edge of Hurricane Irene in Hobie Adventure Island
Older: Caught By Another Thunderstorm