You are here: Home / Sailing / Caught By Another Thunderstorm 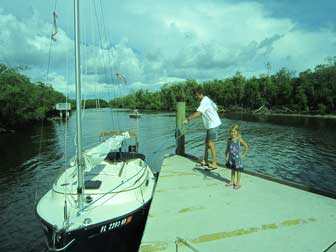 It started out so nice!

Our plan for the afternoon of August 6, 2011, was to take an evening sail on Charlotte Harbor from 5 pm until about 7, leaving plenty of time to get the boat back on the trailer and home before dark.

We knew that the plan might fall apart, as a thunderstorm that covers the entire harbor and county is not an uncommon event on August evenings, but on the days when the harbor falls between all the thunderstorms, it can make for a great sail!

It looked perfect for such a sail as we launched from Ponce Park. The dark clouds you see in the background are to the south and east of us, and are moving southwest to miss us. No storms are lined up to hit the harbor at all. It looked so nice, I left a truck window open so it would stay cooler and I left the boat's companionway boards in the truck so they would not clutter up the cabin.

I know better than to do either of those things, but did them anyway. 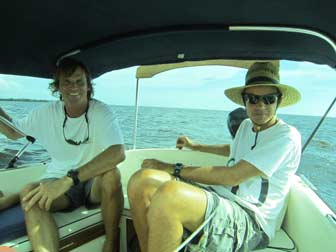 We got out the channel, raised the sail, shut down the engine, and were having some snacks as we sailed north and northeast toward the upper harbor. One of those rare August evenings when sailing on Charlotte Harbor is fantastic, with a good breeze coming off the Gulf of Mexico, and reasonably comfortable temperatures.

Before long, I noticed that a little cloud over in the Englewood area to our northwest was starting to drop some rain. It had not been raining a few minutes before. It was not much, but a line of clouds connected that little storm to the ones to the south and east of us. I knew what that meant, and should have turned to go home right then.

Emboldened by my technology, I reached for my iPhone. I have an app on there called Radarscope that is just great. Really good, current radar in my pocket — something I had wanted for years. Radarscope confirmed what I already knew: there was a tiny storm over Cape Haze, it was growing, and it was moving southwest to miss us.

That little storm was not the problem. The problem was the other thing a look at the radar revealed: the large storm area to our southeast was no longer dissipating, and might even be growing. If the two grew together, they would join more or less on top of us. It was reasonable to expect that to happen, and this would have been another good moment to head back toward the ramp. 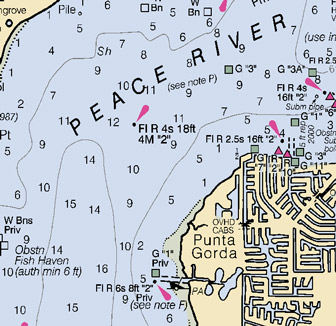 I did not turn back. On this excerpt from NOAA Charlotte Harbor Chart number 11426, we were in the area of marker 2 when I was looking at the Radarscope picture on the iPhone. I could see that the cloud line that was approaching was on the verge of raining, and then it started. Because the line of rain was very thin, and was moving toward us, I briefly thought it might be a good idea to pick the area in the line where the rain was lightest and try to get through to the other side. If we managed it (and the storms did not grow) we would have a really nice sail on the back side of the storm line as it faded away into the distance.

Quickly punching through a hole in a growing storm line is something that can work in reasonably fast powerboats, but it is a desperation move most of the time if I do it at all. I can't really explain why I thought it might be a good idea in a very slow sailboat, other than to say the line was really thin and barely raining at that time.

The iPhone is not waterproof and had to be put away at this point because it looked like a dousing was imminent no matter what we did. No more radarscope, but I could tell that the gap in the line that had looked promising was quickly starting to look threatening. I decided that encountering this storm on the open harbor might not be a good idea, and from our position at the time, the Port Charlotte Beach Complex was the nearest protected area where we could hide. I started heading for it, and the black wall of rain from the west grew that direction to shut off that escape.

OK, if we're not going through it and we're not hiding in Port Charlotte, it's run back to the ramp at Ponce Park and see how far we get before the storm catches us. We still had the full sail up, and gusts from the storm line were starting to hit the harbor, so we were sailing downwind in about 20-25 knots of wind. That's really too much wind for the full sail in the Sun Cat, but headed downwind it was OK and we were making good speed. We needed to go about 20 knots faster to actually beat the storm, but we were making a good attempt at it for a slow catboat. 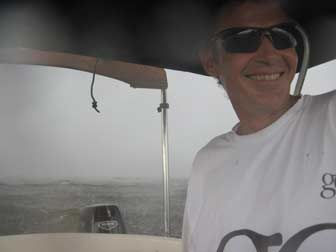 We got past marker number 2 on our way home with only some cool gusts and fairly light rain, but the pursuing storm was catching us. When the first real storm gust hit us, I could see it approaching across the water. I knew that a gust that was stirring up the surface with winds already at 20 was going to be a nasty one, and it was. To ease pressure on the rig, I allowed the boat to round up from our downwind course to a beam reach and spilled the gust. Once it passed, I decided that it would be a good idea to take the sail down while we had a good opportunity.

I quickly lowered it and tied it down in a messy heap, then we started running for the channel under power. Still just ahead of the storm, you can see by the look on my face that I still thought our predicament kind of funny. I was laughing because I knew a half hour earlier that we should run away to avoid exactly this scenario, but did not do it. 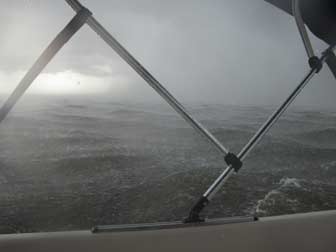 If you do not run away when you know you should, you can wind up in a scene like this one before you know it. This is why I generally take no chances with these storms in the little sailboat. I allow them to get closer when we are out in our little Boston Whaler, but any of my escape strategies when the storm worsened would have worked in that boat. It has the speed to blast right through the line back when that seemed a good idea, or to duck into the Beach Complex when that seemed prudent, and it would have no trouble escaping from that pursuing wall of rain. The rain wall was probably only moving at about ten knots, so the Whaler would outrun it easily, but escape was impossible in the Sun Cat. 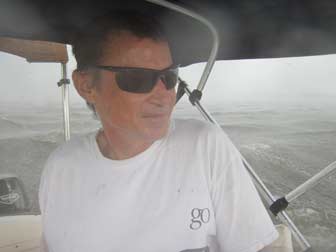 The rain wall ate marker 2 and it disappeared from sight in an instant. The speed with which it vanished told me that the visibility inside the heavy rain would be very low. We were slowly approaching the Ponce Park channel markers, but it occurred to me that if the rain was heavy enough, we might not be able to see well enough to shoot the channel in the rain. The water on either side of the channel is wading depth at high tide, and the bottom can be exposed at low tide. Even Sun Cats have to stay in the channel. The somewhat amused look on my face comes from contemplating what it might look like in an hour, with the storm gone, but our boat firmly stuck on the flat outside the channel. 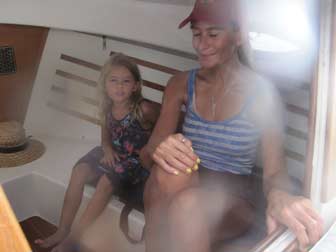 I had asked Gene's girlfriend and her daughter to hide out down in the cabin when I lowered the sail. I was not really concerned for their safety from the storm in the cockpit, but was worried that I might step on one of them while trying to lower and secure the sail. With the arrival of the heavier rain, Gene attempted to use his body and a throwable cushion to block the companionway. I made a mental note to never, ever leave the companionway boards behind for any reason, even if it seems like a really nice afternoon for a short sail. I already knew that, but another note was obviously needed.

The sailor girls were not alarmed by the situation at all, which was a relief to me. If I screwed up and scared that little girl away from sailing for life, it would be hard to bear. Luckily for me, she thought the whole thing was a grand adventure. Her usual reaction to being on a boat is to fall asleep, but at least on this boat ride, she stayed awake! 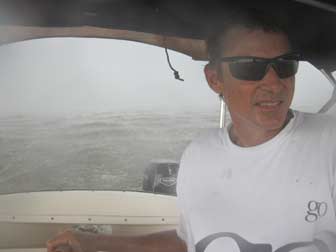 At this point, I was starting to get cold and annoyed. We made it to the channel just as the heavy rain sheets started to blow in and the chop started to really kick up in the storm winds. Having previously charted the bottom outside this channel with a variety of boats, I knew that we could cut the corner, ignoring the outer markers and aiming for an inside pair. My concern at this point was that the outgoing tide and the wind and chop would all try to push the boat across the channel, and I was not sure that the little 5hp Tohatsu was going to be powerful enough to hold us in the channel.

Cutting the channel corner was a good move, since it meant that as soon as we entered the channel proper and started making our way across the wind, we had shallow water outside the channel and the chop went away. In the relatively calm conditions of the sheltered part of the channel, the engine had no trouble overpowering wind and tide to keep us on course. I had to steer about 20 degrees to the left of where I wanted to go in order to maintain a straight track down the channel.

We docked the boat in driving rain and got the boat back onto the trailer and ready for the road in record time. No pictures of that process because all hands were busy. 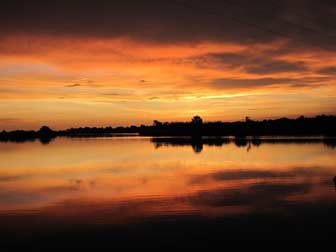 One of the strange things about an afternoon thunderstorm encounter like this one is how nice the weather can be just before and just after the storm. We arrived home and took the dogs for a walk down to Shell Creek, where we enjoyed this beautiful sunset. The dark cloud overhanging the top of the picture is an edge of the storm that chased us off the harbor a while earlier.

This trip was another occasion on which I was glad to have my Canon Powershot D10. When the rain is blowing sideways, most cameras have to be put away, but we just left mine sitting around in the cockpit the whole time. Here is some of the video Gene shot with it after we got the sail down: