You are here: Home / Kayaking / Sailing the Edge of Hurricane Irene in Hobie Adventure Island

On the Winds of Irene 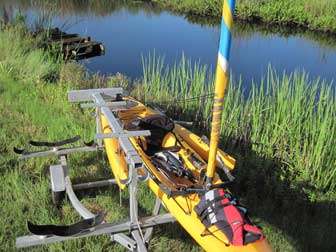 A nearby tropical weather system that is not a threat always causes great sailing weather, and today was no exception. After a morning look at Hurricane Irene's rain bands determined that none could reach our area before noon, I went down to Shell Creek to launch my Adventure Island. I was pleased to see the water so high because a strong NE wind can blow the water out of the harbor, making launching at this spot a difficult and muddy process.

With the boat in the water and ready to go, I had my wife follow me down to Ponce de Leon Park at the tip of Punta Gorda to drop off the truck and trailer, then returned and got in the boat to leave just after 10:00 am. 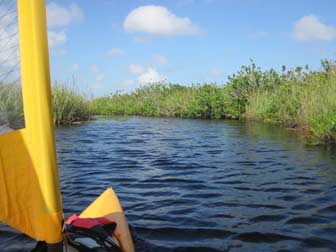 The branch of Shell Creek where I launched is very narrow, but because the wind was strong and favorable, I was able to start sailing almost immediately after leaving the dock. Sailing is a lot faster than pedaling the Adventure Island, but I left the Mirage Drive in place. I was going to need it soon enough to get under the US 17 and railroad bridges. 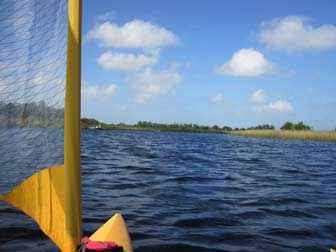 Once I got out into the open creek and away from the shore a bit, the wind quickly took me up to Adventure Island humming speeds for the reach over to the US 17 bridge. Once under the bridge, I took the most direct route to the railroad bridge, even though it crosses through some pretty shallow water. I figured the tide was high enough to make it, and I was eager to get out into the harbor and splash around! 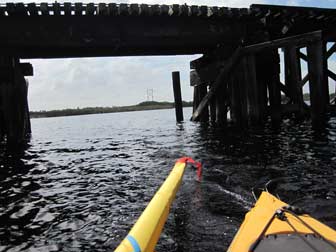 Leaving the railroad bridge across Shell Creek behind meant I could leave the mast up from there on out, but more importantly, it meant I had reached the more open section of the creek where it joins with the Peace River. There is nothing much out here to block the wind, so it suddenly felt much stronger when I got the sail back out. 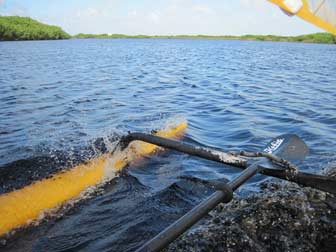 How much stronger was the wind? The picture at right shows what was happening. This is the boat's way of trying to tell me that reefing would be a good idea, but I am preparing to turn further downwind and decided to just carry a bit too much sail for a short stretch.

The reach down the Peace River was fun, but I did not really get wet, which I kind of expected in the open parts. Approaching the Interstate 75 bridge, I pulled the Mirage Drive out of the boat and secured it in the well behind me. Removing the Mirage Drive at 4-5 knots is a good way to get wet, and I took a hefty splash up through the well before I jammed the well plug in place.

There was a peculiar wind funnel effect at the bridge, which I really wish I had caught on video. The area around the bridge pilings usually just has disturbed air that is not quite as strong as the surrounding breeze, but as soon as I got under the bridge today, I was hit by a powerful and steady flow of wind and the boat took off. I'm pretty sure it was the fastest I have sailed an Adventure Island, and it was wild! The flow died as quickly as it had started once I reached the far side.

The run between the I-75 and US-41 bridges was the first time it got wet enough to really need my Canon Powershot D10 waterproof camera. I bought it just for days like this one, when the fun of sailing an Adventure Island gets too wet for normal cameras. The boat started diving through chop and a few of the wave tops slammed into the akas, which always makes for a good splash.

Approaching the 41 bridge, I could see the sails of my friend Tom's Morgan 30, Whimsy, prowling around in the upper harbor. I had invited him to come Adventure Islanding, but he felt the need to stretch his own boat's legs before I even made the call. We agreed to meet out on the harbor. 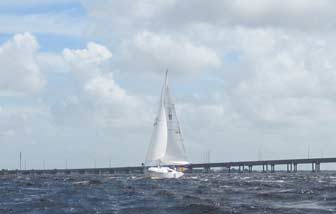 Tom had his main reefed down and his smallest jib on, and was still moving along with plenty of power. He came by on a beat, which I captured on video, then jibed around to follow me down the harbor. He may find it fun to pound upwind in his old Morgan, but there is a reason I started the day by moving my truck to the downhill end of this run: I don't want to try to sail the Adventure Island upwind in this wind and chop. It's a blast to go downwind; upwind is for pickup trucks. 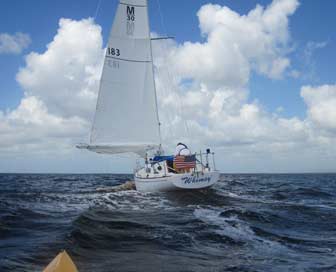 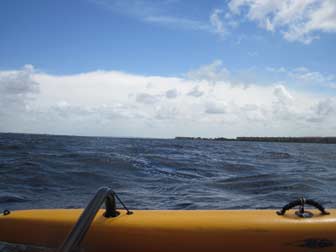 As I approached the channel into Ponce Park, I could see off to the east the top of the outer band of showers associated with Hurricane Irene. Over in the Abacos, they were experiencing winds of 115+ and it is likely a great deal of Grand Bahama island was flooding when I took this photo, with a strong north wind blowing water over the Little Bahama Bank and right over the island. This is about as close as I want to be to a category 3 hurricane, and I only want to be this close if I know it is leaving the area. Thoughts and prayers are with those in the Bahamas who are hanging on for dear life, and those still in the path of the storm.

This is a short video I took with the Powershot D10:

And some video taken by Tom on board Whimsy 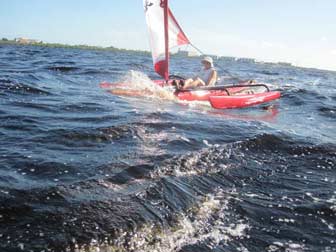 Conditions the following day were nearly as good for Adventure Island sailing, but with a significantly different wind direction, so Sonja and I decided to sail our boats from Laishley Park in Punta Gorda to our place on Shell Creek. The NW wind would provide a nice reach the whole way. We considered sailing all the way from Ponce Park, but decided we did not want to get back all that late, so opted for the shorter trip. It's a good thing we did!

We pulled out of Laishley Marina at around 5 pm, and immediately Sonja started having trouble. The heavy, steep crossing chop we were experiencing was yawing our boats sideways quite a bit, and if you twist an Adventure Island around in the water without the rudder locked down, you can twist your rudder right out of the water! That is what happened to Sonja, and she lost steerage. Despite the strong NW wind, she was slowly making westward progress, toward the US 41 bridge! This should have been my first clue that we had a seriously strong opposing current, but I was concerned more with getting her out of the situation. I sailed over and told her that her rudder did not have a broken pin, as she suspected, but was kicked up ninety degrees and hanging sideways above the water. She pulled it down and locked it and had no more trouble. I do not like to lock mine, and found that I had to keep tension on the rudder downhaul line to make the turnaround in the chop.

We were soon skipping and surfing over and through the harbor chop, more through than over, as the pictures show. 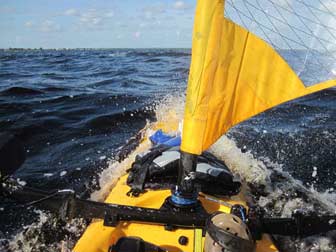 Sliding down the steep harbor chop and burying the bow in the next wave is good entertainment! Kayaking Bob over on the Hobie Cat forum says that his spray skirts will stop the bow from submarining and make for a much drier ride, and many others corroborate his claim. My problem is: I LIKE stuffing the bow of my boat. It may not be as fast or as dry, but it sure is funny!

The adverse current meant that our speed up the harbor was much slower than anticipated, and it took us 2 hours and 40 minutes to get to our boat ramp. I have made that same trip in an hour (a really wet and wild hour). Had we launched at Ponce Park, we would have had to abort the mission and call for pickup at Darst Park or something. We would not have made it home by dark.

Some video of our trip, including diving the boats in chop and stepping the mast after passing under a low railroad bridge: