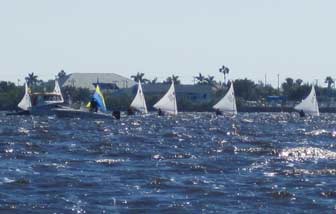 Driving over to the Laishley Park boat ramp on Saturday morning, I was hoping the ramp would not be crowded due to a fishing tournament, and maybe I could launch pretty quickly, perhaps even getting a hand from someone at the ramp. What was I thinking? The whole parking lot and ramp area was completely deserted. No one else thought it was a good idea to go boating in 20-plus knots of cold north wind? In truth, it did not seem like a great idea to me either, but I had agreed to use our Boston Whaler 15' to serve as the windward mark setting boat for the Florida Sunfish Regional Championship being put on by the Charlotte Harbor Community Sailing Center.

The low tide combined with the wind blowing all the water out of the harbor made it impossible to approach very close to the Community Sailing Center area at Punta Gorda's Bay Front Center. I anchored off and waited, and presently Bob came out in a dinghy to bring me the inflated race mark we would be setting. I asked him whether he had a Thermos of hot chocolate, but he did not. Oh well. They dropped Gary aboard to crew for me, and off we went to the course area to await instructions.

The Precision 15 and Flying Scot fleets apparently felt there was too much wind and did not show up, so some of the race committee volunteer vessels were sent in as well. My friend Butch, who was sent in in his Com-Pac Sun Cat, was just as glad to go home and remarked on the Sunfish sailors coming out through the chop, "Sunfishers ain't right!" It really was not a pleasant day for sailing, with temps in the 50s and a biting north wind blowing the tops off the steep harbor chop.

The course we set consisted of an upwind leg, a reach out to a mark directly out from the start line, another reach to a leeward mark set a ways downwind, then back to the upwind mark, then downwind to finish back at the start line. The chop was steep enough that we took a couple of waves over the bow, but we got the windward mark in position and anchored a short distance away to watch the action and stand by in case the mark needed to be moved between races. In the distance, we could see the Sunfish fleet coming across the line in their first start of the day. 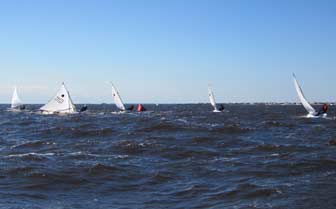 By the time they made their way up to the windward mark, the fleet was still in a pretty tight pack. In the picture at left, it looks like one of the sailors is hotdogging it, hanging ten off the front of his boat, but that is actually the sailor on the Sunfish that is mostly hidden from the camera hiking out. 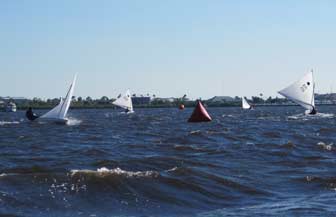 Sunfish bashing through harbor chop at the windward mark

The shallow basin of Charlotte Harbor can get churned up into some pretty ferocious, steep chop, and we could hear the banging sound of the Sunfish hulls pounding their way through in a cloud of spray on their way upwind. Bobbing around at anchor and trying to hold my cameras still, I was glad we were at the far upwind end of the course, relatively close to the protection of the northern shore. It was worse out in the middle, but even where we were the chop would occasionally pull our anchor free from the soft mud bottom. We just dragged along for a while, then reset it when we drifted too close to the race course. 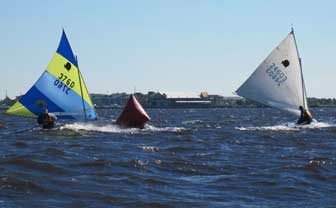 Sunfish accelerate as they round the mark

The strong winds made for some impressive acceleration as the Sunfish rounded the windward mark and turned off toward the reach mark. 20 knots of wind is plenty to make a Sunfish plane out, so we were seeing a frothy trail of white water behind the fleet as they took off on the reaching leg of the course. 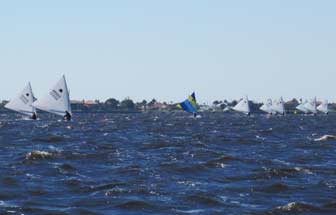 Sunfish on a drag race to the reach mark.

Most of the fleet lined up in a drag race out to the reach mark, which is the yellow spot in the photo at right (click photo to enlarge). The gusty winds swirl around in the harbor, creating the opportunity to overtake other boats on the fast reaching legs by staying in the stronger wind. Easier said than done, since reading and predicting the puffs in the confused chop is about like predicting the motions of a flock of dragonflies: you can barely see them and they go every which way! 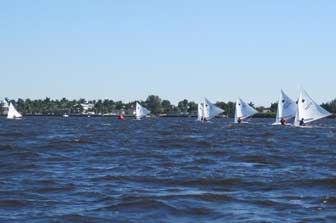 Down at the other end of the course, we could see them rounding the leeward mark and beginning to slog their way back up through the chop toward us. Boats still screaming down the second reaching leg would close a lot of distance on the ones ahead of them who turned upwind. 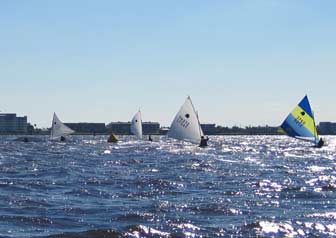 Capsized Sunfish near the reach mark

One sure way to lose some ground in a Sunfish race is to capsize, and while the sailors did a great job keeping their boats up most of the day, one did capsize just after gybing around the reach mark. The boats following close behind passed by almost immediately. Swimming around in chilly water trying to right your boat as your competitors sail by is less than fun, especially if they lack the class to refrain from laughing at you, not that I'm mentioning the name of anyone who did not bring us hot chocolate. OK, OK, so it was funny when I did it recently, and I would have laughed at him too! 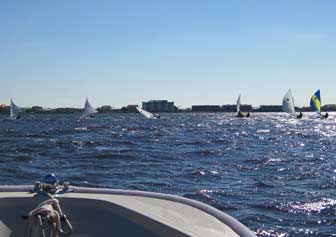 We were headed over that way to assist if needed, but the sailor quickly got the boat back up and turned back around on course. Having fun again, but I think four boats sailed by before he got going. 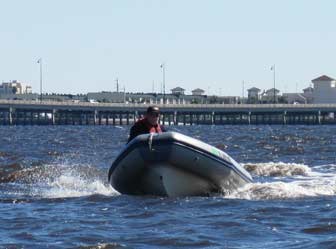 Bob patrolling the course in the Sailing Center RIB dinghy

Bob came by, patrolling the course in the Sailing Center's RIB dinghy. For some reason, he still did not have a thermos of hot chocolate to share with mark boat crews. Now that I see the value in the idea, I am going to make sure that we have hot chocolate on the mark boat and race committee boat for the Sun Cat Nationals next weekend. 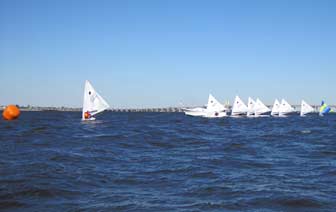 As the boats were preparing for the third start of the day, it was time to reset our anchor again, and we decided that since the windward mark would not need to be moved again, we would wander the race course to better see the boats and take pictures. We were hanging around the end of the starting line at the beginning of that last race of the day as the boats jockeyed for position. 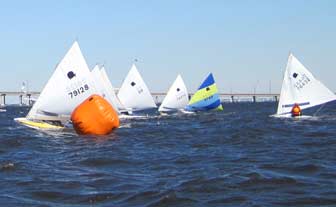 And they're off! Sail number 79128 was a dominant boat all weekend, and chose to start all by himself at the pin end of the line, while the rest of the fleet fought for space over by the committee boat. I'm not sure what happened to number 76432 over there, but he got a pretty bad start that race. In one-design sailboat racing, a lot is often determined at the start, especially on the short courses they were running. There is not a lot of time to run down a fleet of boats. 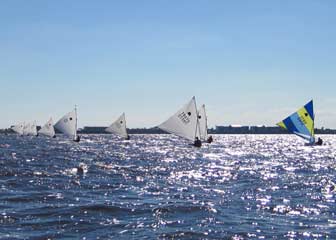 Sunfish fleet on the run

We followed the fleet around the course, and after the bad start Sunfish 76432 managed to pass two boats, but had no chance of catching the rest of the fleet. With three races done, we collected the marks and called it a day.

Some video of the 2010 Florida Sunfish Regional Regatta: 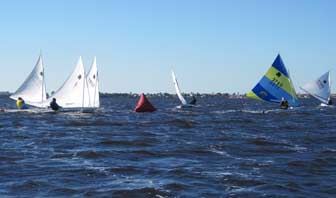 Day two started with a pretty tight race as the boats made their first rounding of the windward mark. The wind was down a bit, in the high teens with some gusts above 20, and it diminished to 15-20 as the day went on. The temperature was a bit higher, but still in the hot chocolate range. 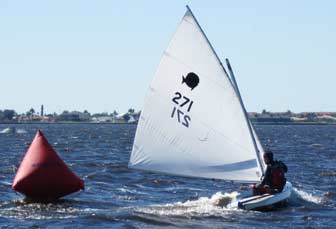 Sunfish flying through the turn around the windward mark

After the previous day's three races in nearly identical but slightly more challenging conditions, all the sailors were dialed in and sailing well, so we saw them carving fast, clean turns around the mark and tearing off toward the reach mark. 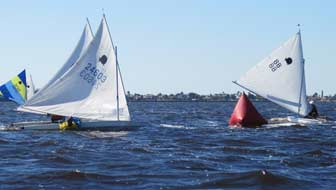 In the photo at right (click to enlarge), the guy in yellow wins the "hiking hard" prize for the day for almost (but not quite) getting the back of his jacket in the water. Wind resistance is lower way down there, but if you drag in the water even a bit it's like putting on brakes and can result in a capsize. 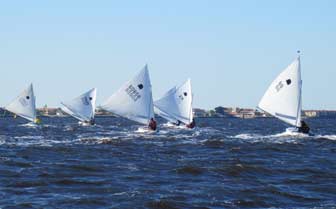 The Sunfish fleet blasting along toward the reach mark were leaving an impressive frothy trail of wakes. Conditions for Sunfish racing do not get much better than this — if you "ain't right" and don't mind getting wet and pounding around in various uncomfortable positions. I sail them in the summer when the water is warm, and we only get nice winds like this when we are rushing to put the boats away before a thunderstorm. 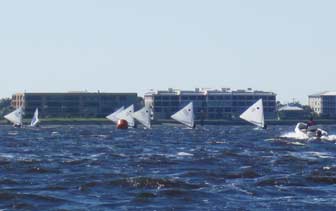 The lead boat is just starting to round the leeward mark

The fleet was still in a reasonably tight group when they got down to the leeward mark. In this picture, the lead boat is just about to round the mark. Bob is pursuing them in the little chase boat. He dropped by to say hi, but once again did not have hot chocolate. Some people just don't take a hint very well. 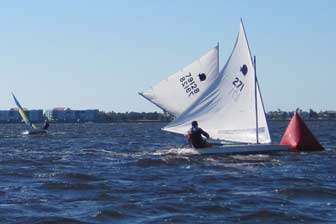 When they got back up to the windward mark, the battle between the first and second place boats was still close, with the rest of the fleet in a group some distance behind. 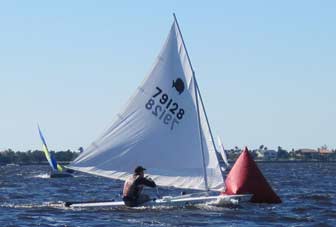 Making it look easy, the lead boat rounds the windward mark just ahead of his competition. It is not all that easy. I'm a competent Sunfish sailor, but racers like these beat me regularly, and I only beat them when they make a really bad mistake. 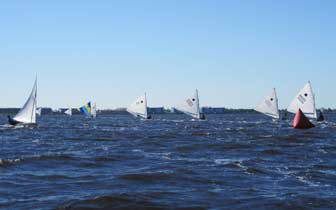 The fleet was pretty stretched out by the final downwind run, as the last boat makes its way up to the windward mark. 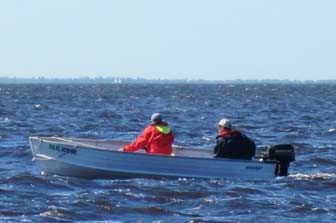 The Precision 15 fleet stayed in on the second day as well, but the Flying Scots did come out to race. They were quite a distance away, so I could not tell what happened, but there was a pretty bad problem with a red spinnaker and then I saw one of them being towed back in by a small powerboat. A short while later, an aluminum skiff that had been serving as mark boat for that race circle dropped by our area to see the action, so I guess they broke something that ended the day on that Flying Scot. 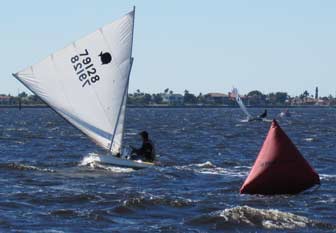 Sunfish on a run

A great demonstration of good downwind technique in the Sunfish. The sailor's weight keeps the sail high as he pulls up the dagger board, and the sail is trimmed slightly by the lee. It makes for a fast run in these conditions, if you do not wipe out.

Some video of the 2010 Florida Sunfish Regional Regatta day two: