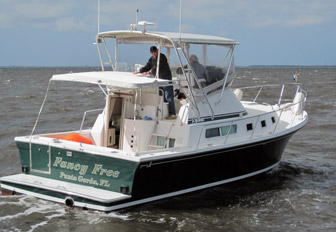 Charlotte Harbor is a great place for sailors! With more than 80 square miles of water, it is large enough to sail in new areas all day, but small enough that protection is never far away. I got the word through the Punta Gorda Sailing Club that Brian Gleason and the Charlotte Harbor Regatta board were asking for volunteers to serve aboard race committee boats. I contacted them and told them I could serve, and use my 15' Boston Whaler to set race marks or as a safety boat if needed.

They had plenty of boats, so asked me to be aboard the race signal boat. For those who don't race sailboats, the signal boat marks one end of the start/finish line in these races, so I was guaranteed a seat right where some important action takes place.

When I got the duty roster, I noticed my name in one place: on Saturday. Friday morning I thought I should contact the skipper and ask where I should be, and when. I took another look at the schedule and noticed that I was also supposed to be aboard the signal boat Friday at 9:00! It was 8:26! I quickly called the skipper, who had already left the dock. Oops! I grabbed my waterproof camera, wallet, and a bottle of water and raced out the door, catching a ride aboard one of the mark setting boats to get out where I was supposed to be. The boat I was aboard was an Albin 32, almost identical to this Albin 322, except for the integral swim platform.

Though I have spent a little time racing various sailboats, I was not at all familiar with the details of life on the race committee signal boat. While the boats were checking in I chatted with the aging ex-Navy guys who were also serving as volunteers, and we all attempted to stay out of the way of our skipper, Jeff, who was running around setting things up.

The first question to answer in setting up a sailboat race course is, "What is the direction and speed of the wind?" Jeff has a portable wind instrument mounted on a pole on his bow rail, and with a built in electronic compass it reads the wind speed and direction, using a running 6 second average to smooth out variations in the readings.

Once the wind direction was determined, Jeff directed the mark boat to place the upwind mark 9/10 of a mile directly upwind of the signal boat. With that mark in place, Jeff turned his attention to the pin boat, whose job was to set the leeward mark just off our bow, and then to set the "pin" mark on the other end of the starting line, which is placed perpendicular to the wind direction and far enough from the signal boat to allow the racers room to start, but close enough to sort of pack them together. Obviously, the exact distances and angles of these marks can only be determined after the signal boat is in position, and the wind direction and speed are known.

With the course in place, Jeff set up an official race clock where we could all see it, but racers could not, and explained to us the operation of his countdown timing device. Before a sailboat race, the signal boat sounds a 5 minute warning horn and puts up the flag of the fleet that is to start, giving the racers notice to get in position near the line. At 4 minutes to start, another horn sounds, and a "Papa" (P for preparatory) flag is flown. At one minute to start, the Papa flag comes down with another horn blast, and when it is time to actually start the race, the fleet flag comes down as the starting horn sounds.

It is important that the crew on the signal boat get these signals right and do them precisely on time, so Jeff had a neat device that would beep to warn us when there was an impending flag signal required, and would automatically sound the horn. As the race starts, our eyes need to be focused on the starting line, to call out the sail numbers of any boat across the line before the signal. One crewman on the signal boat is standing by with the individual and fleet recall flags, in case they are needed.

Meanwhile, with the S2's on their way sailing up the course, we on the signal boat were working the flags for the start of the Viper 640 class race. The pro's were obviously running through a choreographed pre-start sequence they had honed to a fine point, and it was fun watching them come head-to-wind on the line, check the actual wind on the line, then zip off in one direction or another on a timed run to get in position for the start. In this video, you can see a Viper 640 class start and in the background hear the beeps and horns from the timing device aboard the signal boat. One of the boats crossed the line early. The video also shows the finish of one of the races, including one Viper that ran out of finish line and had to jibe close to the signal boat, right in front of my camera. Those little sport boats look really fast and fun!

While the two fleets were off on the race course, race management continues aboard the signal boat. We stayed in contact with the mark boat, which stayed up near the windward mark, to ascertain when all of the boats had rounded the mark for the last time. This allows a window of time before the next race during which the windward mark could be repositioned if the wind changed between races, which it did. They had to move the mark a short distance. We were also talking to the pin boat, which had to reset the other end of the start/finish line so as to keep it perpendicular to the wind direction.

Other than that, life on the signal boat was pretty relaxed during the races. I listened to the Navy guys exchange stories and had a sandwich, thinking about those racers out there who had to try to find a moment to gulp down a granola bar to keep hunger at bay. I also took the opportunity to take a lot of pictures and videos of the sailboats as they raced. This one shows a rare moment when S2 7.9 "Soulshine" led eventual winner "Bama Slammer" around the leeward mark, with the two boats simultaneously dousing their spinnakers just before reaching the mark.

Some pictures of the boats racing on Friday:

Here is a short video of the Viper 640s racing, along with S2 7.9 "Crime Scene" which was not quite fast enough to finish ahead of the Viper fleet.

As the boats finished the race, our job on the race committee boat was to keep track of the sail numbers and the order in which they finished. I learned that from the perspective of the watchers, a Viper 640's sail number is not visible when they are reaching toward the finish line. It is completely obscured by the spinnaker. Unless the number is also on the spinnaker, you have to catch it when they jibe or it will only be visible once they are crossing the line. If a pack of them cross at once, the sail numbers can be obscured by another boat. In our club races, everyone knows all the boats, and they're generally called by name and not sail number. There is never any question about which boat is over there finishing beyond the boat finishing alongside the signal boat. In our small fleets, we did not have any problem figuring out who was who, but I can see how it would be difficult in some of the big class races to figure out who finished where in a pack. Once all the boats were finished racing 4 races, we radioed in the results and headed back to the dock. My truck was still stuck where I had met the mark boat, but it happened to be at Bill's neighbor's house so I just went home with him. Life is good like that in Punta Gorda, and what a great day on Charlotte Harbor!

Charlotte Harbor is shallow and well protected, with only a few miles of fetch in most wind conditions and an average depth of about 12 feet. When it gets choppy, the waves are steep and close together, making them difficult for the light Viper 640 class, and not much easier on the S2 fleet. We had some time to kill on the signal boat as the racers fought their way upwind against the whitecaps. The guys I was crewing with turned out to be fascinating and fun characters. One of them, Jay, served aboard a minesweeper, and told us about drills they would do in which they planted and recovered dummy mines. At least, they got most of them! He told us about one mine that was lost, then recovered a few years later, after the area had been seeded with mines and swept in the annual drill each year. He said the mines would detect the electromagnetic signature of a ship and detonate, and one of his responsibilities was to ensure their ship's signature was low.

I knew that minesweepers were made of wood, but he said most of the metal parts used to assemble the wood were monel, thus both corrosion resistant and non-magnetic. I asked why the mine did not just sense the engines and blow them all to kingdom come. Aluminum engine blocks and more monel and other non-ferrous material is used for everything mechanical on the boats. Interesting stuff, then Bill, a former Navy Corsair combat pilot, told us about flying off the carrier. He said that in tight quarters, they would tie down a few Corsairs on the forward flight deck on either side, with the rows of airplanes facing inward. They could effectively turn the ship by simultaneously throttling up a few 16 foot propellers on one side of the ship, while directing the ones on the opposite side to power down. A 900 foot airboat!

I got some video of the fun and the mishaps of the S2 7.9s, Viper 640s, and other boats sailing in the Charlotte Harbor Regatta on Saturday, Feb 6, 2010