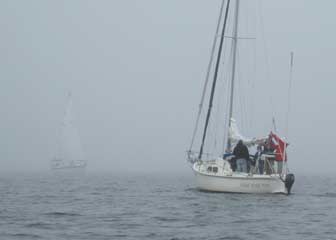 Saturday started out very foggy. As Pete and I departed the boat ramp at Ponce Park, I could see the channel markers right by the fishing pier, but not the next set. That continued all the way out, barely spotting the next set of markers as we passed each one by. At the end of the channel, I turned to get outside the channel a bit and close to the shallow water, hoping to stay outside the path of any flats boats and inside the path of any large boats that might be passing. Visibility was about 100 feet.

I fired up the Garmin Oregon GPS and considered making our way out to marker 2 in the fog, but while I was considering the idea, the "low battery" warning came up! I had quickly fired up the GPS before leaving home and the batteries showed a full charge, but now they were low! I was glad I could still see the channel markers, and more glad that I had a spare set of batteries. We were discussing the possibility of using my iPhone's mapping feature plus the compass on my watch in the event the second set of batteries turned out to go dead quickly as well. Discussions like that can be the beginning of really serious problems.

As we were drifting around near the mouth of the channel and hoping for the fog to lift, we saw one of the sailboats heading out, a Colgate 26 named Trout, and also a large blue trawler coming in the channel. 10:00 am rolled around and the fog was still pretty heavy, but starting to lift. We decided it was time to make the run out to marker 2 to meet the race committee. I think they were pretty surprised to see us show up out of the mist!

The experience has caused me to reconsider my decision never to put a compass on our 15 Whaler. I generally do not need one, do not want the extra clutter on the console, and most of all do not want to drill holes in the console, but all of those concerns seemed kind of minor when the visibility was down to around 100 feet. You can buy a replacement mahogany console for a Boston Whaler, but knowing which way you are going can be priceless! 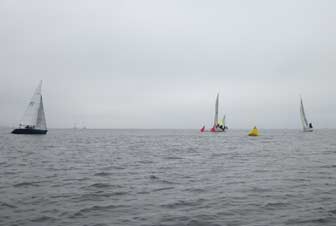 The fog lifted quite a bit by the time we headed out to set the upwind mark, but we were still completely without visual reference and going on the handheld chartplotter with essentially no backup plan. It was during that run that I started to think that maybe a radar would look better on the Boston Whaler than a compass. As we set the mark just under a mile upwind of marker 2, we could just barely make out Grassy Pointe and the mangrove beach along the Port Charlotte shore leading to Hog Island, so visibility was about half a mile.

The first sailboats started to round the mark, and the usually smooth crew of Bama Slammer went spinnaker shrimping briefly, but quickly recovered the soggy sail and carried on downwind. 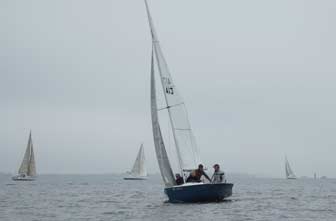 The SR Max 21 Blind Chance put in an impressive performance, rounding the windward mark with larger boats generally in 3rd or 4th position. 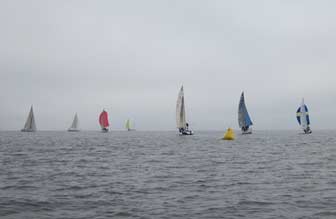 The committee boat and turning mark are down there in the fog somewhere! 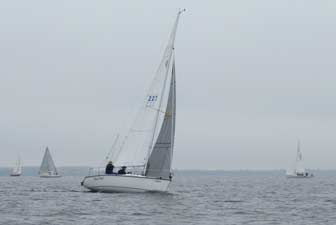 The fog had lifted enough to see the shoreline of Punta Gorda Isles by the time the Colgate 26 Flying Cloud approached the windward mark. 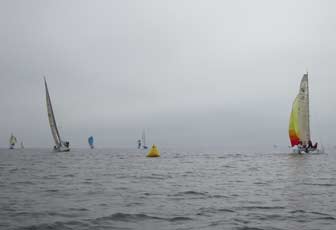 Stiletto 27 In Flight sets the spinnaker and takes off on a reach downwind. 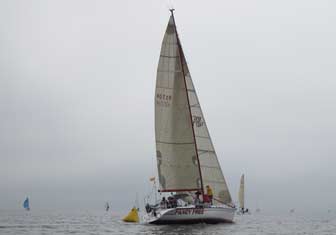 The Soveral 39 Fancy Free is always an impressive sight rounding the mark. 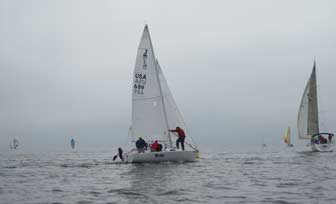 Someone shrank Skip's boat! The Tartan formerly known as Frolic no longer goes by that name, and now we have a competitive J-22 called Frolic! 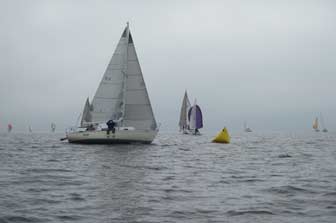 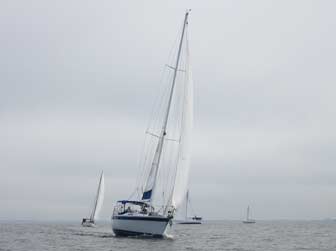 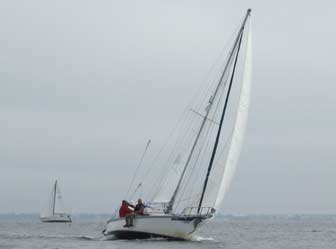 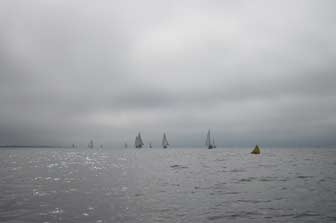 The fog lifted into sort of menacing looking clouds as the cruising fleet made their first run downwind. The wind was biting and cold, and the sky looked for a while like it might snow. Very strange weather! 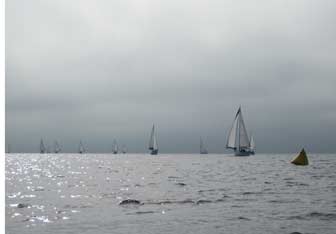 Is it really going to rain? Or snow? It looked like it might for a little while there, but there was really no chance of precipitation of any kind. Just lifting fog looking ominous. 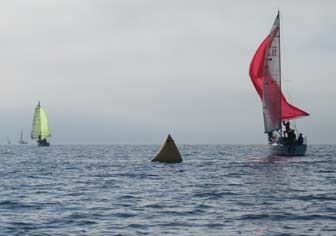 The S2 7.9 Bama Slammer came charging around the mark very nicely, dropped the jib, and for a long moment nothing happened, and then we heard some sailorly terms being used to urge the crew to hoist the (expletive deleted) spinnaker. Seems everyone was ready for someone to do it, but no one was ready to do it. 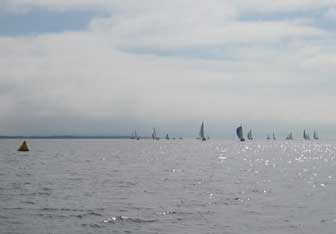 As the first lap wrapped up, the fog and clouds burned away leaving blue skies and lighter winds. 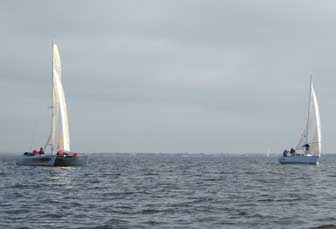 The wind slacked off a bit as Crime Scene and In Flight approached the mark on this lap. 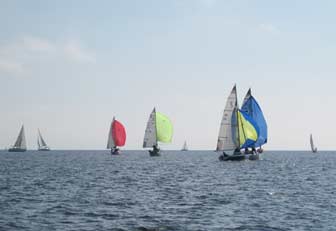 There was still enough wind for the spinnaker boats to fill their sails, but as the rest of the fleet finished the wind died out further. 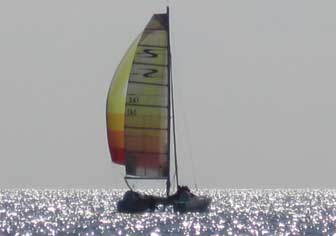 Hunting for a better apparent wind angle and higher speeds, the Stiletto 27 headed off into the sun. I don't know whether he found it, but the wind died out and came back from a new direction before too long. 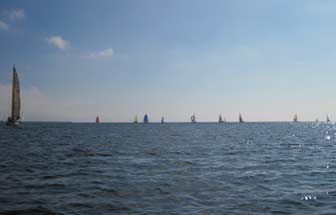 We moved the windward mark prior to the second race to align the course with the new wind direction, and for the first lap of the race it was a picturesque SW Florida sailing day. The wind was a bit light, but the direction was fairly steady and the boats were moving well around the course. It did not last... 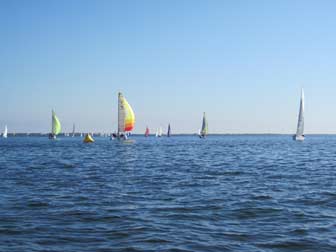 As the faster boats headed around on their second lap, the wind went away almost entirely and the harbor was glassy calm. At least it was warm and we had some food to eat. It looked like it might take a while for the cruising class to finish, if they could do it at all within the time limit for the race. 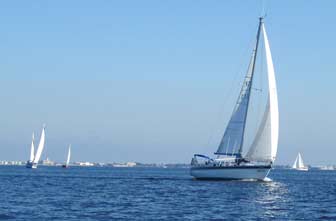 Don't count out the cruising fleet. If they sail around long enough, eventually the wind comes back! Here comes the Endeavour 32 Bentley, kicking up a small bow wave. 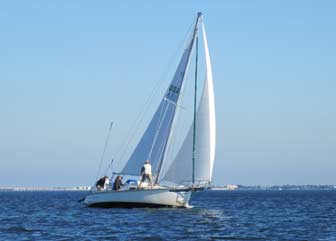 Wicked Wicked Ways moving along quite well for a boat carrying a PHRF of 278 in this race! The wind was strong enough toward the end of the race to kick up a bit of a chop, making a somewhat bumpy ride for us as we brought the inflatable mark back to the race committee boat. Hard to believe it was glass calm and I was wondering whether the sailors could finish the race a little while earlier, and even harder to believe all the weather we saw happened in just one day!

Some video of the 2010 Punta Gorda Sailing Club Holiday Regatta: