When my brother and I bought a CSY 44 back in 1987, the boat had older electronics installed, and none worked particularly well. We decided to outfit the boat with state of the art navigation and communications equipment, and we kind of went overboard.

We removed the old Loran and VHF radio from the nav station, and installed a new Northstar Loran, a new Magnavox SatNav, a new Furuno radar, and a new Icom VHF. In the corner of the aft cabin, we installed a teak shelf and put an Icom SSB radio back there.

The problems with all this fancy new stuff proved to be in the installation. We explored putting the radar dome up on the mast, but it would interfere with the staysail if set low, and with the Genoa jib if set high. Also, it has a thick cable, and passing that cable down the mast was going to be a problem.

We also needed antenna cables for the new VHF, the Loran, and the Sat Nav antennas, and there was no way all those cables were going through the mast, especially if a fat radar cable had to go through there as well. Even if we did get all the cables down the mast, they were still going to be a fair distance from the navigation station where the instruments were to be mounted.

The Solution? A Custom Aluminum Arch on the Transom

I guess sometimes it pays to be a powerboater as well as a sailboater. In collaboration with the electronics installers and my buddy Gene, we came up with the then-novel idea of constructing a welded aluminum arch on the transom of the boat, and using that as a place to mount the radar dome and the SatNav and Loran antennas. 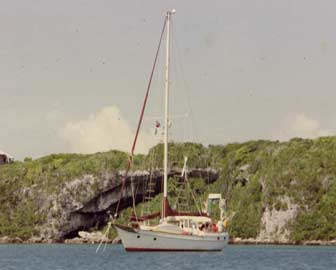 The aluminum arch was set on the deck on either side of the aft lazarette with two feet, and the other two feet were mounted on sockets secured to the outside of the transom. It was very sturdy, and could be used as a chin-up bar if needed.

The radar arch became a central location for lots of different stuff. At Gene's suggestion, I had them weld 4 rod holders on each side of the aluminum radar arch, and those became places to hang wet swim suits and t-shirts. The man-overboard pole was secured to the arch with some light line, along with the horseshoe life perserver. The space between the fore and aft feet on each side of the arch proved to be a great place for some 6 gallon fuel cans, and the extra space on the outside was a good place to lash bags of trash.

We Got Funny Looks, But It Worked Great

Most of the serious sailors I came across were appalled by the presence of an aluminum structure that looked like it belonged on a fishing boat on board my sailboat, but I loved it. It was a very handy thing, in addition to making the installation and wiring of our new marine electronics easy. I think the next owner of the boat tore it right back off, and I know the previous owner thought it was an eyesore, but what do those guys know?