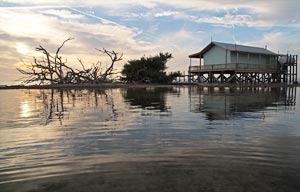 Hugo's water pump blew while he was motoring through Pine Island Sound — home to lots of fishing shacks like this one, but not a good place to blow your water pump.

A couple of years ago, I sold an Irwin 37 center cockpit ketch to a man named Hugo. Actually, the owner, a marine surveyor I will call Dan, had removed the mizzen mast, so it was really more of an under-canvassed sloop. Dan had kept the boat in good shape during his ownership.

Hugo was an inexperienced sailor, and not familiar with how older boats deteriorate, but he was ignorant, not stupid. When he decided he liked the boat, he brought experienced friends with him to evaluate it, both before and during the survey and sea trial. Hugo's friends spoke only Spanish, and although I speak a little Spanish, our direct communication was limited.

The day before sea trial sail and survey, the boat was motored without incident from Venice, Florida, to the Gasparilla Marina in Placida, Florida, by the owner and listing broker Jim Guernsey, and it passed the inspections with only minor problems noted. Hugo closed the deal, and he and his friends set out down Pine Island Sound, headed for the cross-state waterway through Lake Okeechobee and ultimately bound for the boat's new home near Fort Lauderdale, FL.

In the evening, I got a call from a very upset Hugo. They had anchored for a while for dinner, and when they restarted the engine and got underway, it quickly overheated, and they had to shut it down. Hugo translated as I asked his friends some questions to figure out what had happened. It turned out that they were not really all that knowledgeable about diesel engines in sailboats, so I had to walk them through the process of determining the problem and fixing it.

They knew enough to check whether water came out with the exhaust when the engine was fired up, and it did not.

I asked Hugo, "OK, did you check the strainer?"

The engine was a Perkins 4-108, and I had some experience with the water pump on that model, having owned one at one time. I told them where the water pump was located, and to follow the hose away from the engine to the raw water strainer. I told them to follow the hose further, find the seacock valve, and close it. They removed the strainer lid, and found that the screen only had a few blades of sea grass in it, not enough to cause any problem. I had them crack the seacock with the lid off the strainer, to see whether there was something blocking the through-hull fitting or clogging the hose leading to the strainer. Water flowed freely, and they shut the valve back off.

It Had to be the Water Pump Impeller

I had seen the hoses on that boat, and they were in good condition. The problem had to be the water pump impeller. I asked Hugo whether anyone there had ever changed an impeller in such an engine, and I could almost hear the shrugs over the phone. It wouldn't matter anyway, if Dan had not left a spare impeller on board.

I called Dan, who was out at dinner with friends. He had indeed left numerous spare parts aboard the boat, including an impeller. Hugo was no mechanic, but had good common sense when it came to understanding how something worked. It wasn't too hard for me to explain to him to to remove the cover plate from the water pump, take note of the blade position, and ease the impeller off the shaft. If the impeller was not intact (and this one was not), I told him to try to recover all the pieces of it. They lacked proper grease to help get the new one back on, but a search uncovered some oil as a substitute. I told Hugo to make sure to twist the blades in the correct direction as the new impeller went into the pump housing, replace the plate, check for leaks when the seacock was opened, and he'd be back under way. It's really not hard, and requires only basic tools. I hung up confident he would complete the task.

Except that I forgot to mention one thing.

A short while later, I got another call from Hugo. He did not know about the key that locks the shaft and impeller hub together. I never told him it came out, and he figured it was part of the shaft. As the torn old impeller came off the shaft, he heard a small splash down in the bilge. The impeller shaft key. I told him they really have to try to get that back. Meanwhile, I interrupted Dan's dinner again, this time to ask whether he carried a spare impeller shaft key or a powerful magnet aboard the boat. He had neither. People, if your bilge is deeper than the length of your arm, carry a magnet. Keep it far from your compass or anything electronic.

Hugo called back, and told me they had no success in retrieving the key. No one could reach the bottom of the bilge, and they had no magnet. A thorough search revealed no impeller shaft key aboard the boat, just as Dan had said.

If you have not seen one, an impeller shaft key is just a piece of metal which fits snugly into a slot in the shaft and a similar slot in the impeller hub, making the hub rotate with the shaft. We just needed something in that slot to lock the shaft and the new impeller, and Hugo would be under way.

I had them search the boat to try to find some piece of metal they could adapt to the purpose. My suggestion was to find a piece of thick wire that could be cut and bent into the right shape. On that engine, the key was shaped to fit into a curved groove in the shaft, and a straight slot in the hub, so it was kind of quarter-moon shaped. 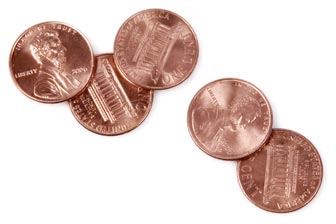 Pennies to the rescue! When you need to repair a boat at sea, a little ingenuity goes a long way.

An exasperated Hugo called me back a while later. They had found no substitute for the key, and had tried again to recover the key from the bilge without success. The day you buy a boat is supposed to be one of the happiest days of your life, but for Hugo, this day wasn't going so well. I told him I was really out of tricks, and he would have to call a tow boat. We now offer a free trial Sea Tow membership to customers, but that program was not yet in effect at the time. A tow boat to get the boat to a mechanic was going to cost quite a chunk of change.

Pocket Change to the Rescue, Or, A Little Ingenuity Goes a Long Way

A little while later, a very happy Hugo called me back, and I could hear the Perkins 4-108 running in the background. He had had an inspiration. He needed a quarter moon shaped piece of metal. Hugo had change in his pocket and a large pair of cutting pliers in the toolbox. Snip, snip, snip, and a few pennies later he had a nice little stack of 3 quarter-moon shaped pieces of metal that fit snugly together in the shaft depression. They put the new impeller on, and it worked just fine.

I warned him that it was not a permanent fix, and the different kinds of metals in contact with one another in there might cause problems, but in a pinch, it worked. They got to the east coast without any further trouble.