You are here: Home / Boating Fun / The Hot Chocolate Cruise

Or, Perfect hot chocolate to the rescue during a cold Florida sail 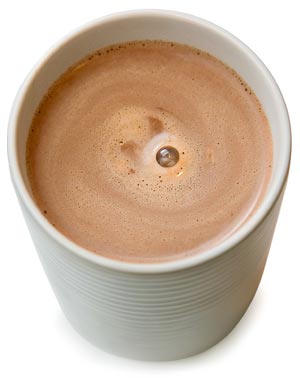 My friend Pete bought a MacGregor 36 Catamaran about 20 years ago. It was basically a supersized Hobie 18 with a 25hp Johnson outboard stuck on the back. It had kick-up rudders and a single daggerboard, and the hulls had a small and Spartan interior. Not much space for a 36-foot boat, but giant, open trampolines and nets made for plenty of comfortable spots to sit.

I got the call one clear winter morning, asking if I would like to take a sail up Biscayne Bay. We had a nice breeze from the northwest in the wake of a cold front, and I immediately agreed it was a good day for a sail. We met at a friend's house where the boat was being kept, and we got the unexpected gift of a thermos of hot chocolate from our friend's sister.

Cold Weather Takes Us By Surprise

Did you ever notice how, no matter what the temperature feels like at the dock, the moment you get out in a sailboat, it's colder? Miami boys don't have many occasions to notice such things, and we were unprepared. We got out the channel and hoisted the sails, and that boat took off like a race car! I had sailed on the boat before, but only in light breezes, and it sailed fine, but we had little power. On this day, we had plenty of power, with winds fairly steady at around 16 knots, gusting to maybe 20. It was just enough to make that MacGregor really fly, bringing the apparent wind forward and increasing the velocity quite a bit. The actual wind was probably 60 degrees or more off our course, but we were sheeted in hard and really flying.

No one else wanted to brave the chilly cold-front winds that day, and we had the Bay pretty much to ourselves, so no one but the cars witnessed the oversized beach cat zipping up toward Rickenbacker Causeway at high speed. They might have been able to see our grins from up on the bridge!

There is no real protection from the wind on the MacGregor 36, and the light spray the boat threw up quickly soaked my light windbreaker, rendering it pretty useless. The others were similarly situated, with mostly inadequate clothing to deal with a 30- to 40-knot sustained salty, wet blast of wind. My ears and face were stinging and my hands were numb rocks by the time we reached the north end of the Bay and turned around to go downwind. Ahhh, the blessed warmth of heading back downwind. We slowed down, the sun was on our backs, the boat wasn't throwing spray at us, and much as we enjoyed the mad dash upwind, it was nice to have the sun and the wind on our backs.

Then someone remembered the hot chocolate. Yes! There could not be a more perfect moment for hot chocolate. We had little styrofoam cups, and each of us got a cup of hot chocolate. The warmth on my frozen-rock-hands felt so good, and the hot chocolate looked oddly thick. This was not your ordinary hot chocolate. This was sis's special recipe, which I sure wish I knew! It was wonderfully chocolatey and creamy and it had at least one kind of booze in it, and it was probably the best thing I ever put in my mouth. The warm, thick chocolate going down your throat, with the added warming effect of a little alcohol and the heat soaking through the styrofoam into my hands felt better than sex. OK, maybe that's going a bit far, but only a bit!

Newer: Choking the New Engine During Break-In — Or, How To Solve Problems By Reading the Owner’s Manual
Older: The Short History of My Life With My F-27 Trimaran #162, Surrender