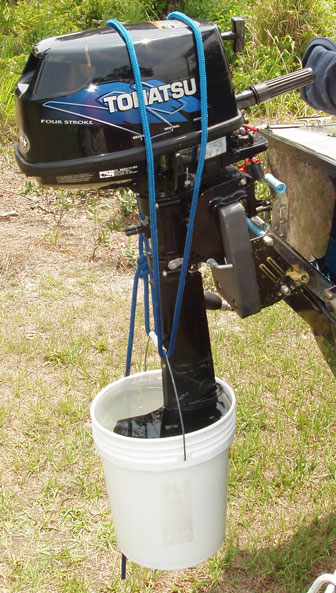 This flushing bucket makes it easy to flush the outboard thoroughly, without needing any special tools.

Alas, some engine manufacturers have made it a bit difficult to properly flush the engines. The one-cylinder Tohatsu engines (also Nissan and Mercury in those sizes) have a screw near the gear lube vent screw which must be removed and a special attachment screwed in for flushing. I don't want to carry around tools and parts just to flush an engine.

Also, I'm suspicious of these flushing attachments on which you are not supposed to start the engine. That tells me that parts of the cooling system are not being flushed. Fresh water is not going through the engine's water pump, so salt water remains inside.

Fresh water may be going to the exhaust manifold where engine cooling water is generally mixed with the exhaust, but can it be splattering around inside that manifold and the exhaust ports as much as it does when the engine is actually running? I think not, so I believe that outboard engine flushing attachments for which you do not run the engine do an incomplete job of flushing the salt out of the engine.

I would be happy to just use "earmuff" type clamp-on engine flushers, but the intake on the one cylinder Tohatsu/Nissan/Mercury engines is located underneath the cavitation plate and I know of no clamp type fitting for that type of water intake. My solution to this problem was a flushing bucket. I just hung a 5 gallon water bucket from a 5 hp Tohatsu, filled it up, and fired up the engine.

The outboard bracket in the picture is rated for 120 lbs, and the extra weight put on the motor cover by the lines holding the bucket did not seem to hurt anything. I could have used concrete blocks or something to prop up the bucket, but blocks are heavy and I had a piece of line handy. This technique could also be used on a boat while it is in the water.

The boat in the picture lives in the water about half the year, and the owner has no way to get out there and unscrew the plug, screw in the special Tohatsu flushing attachment, then attach a hose to do an incomplete job of flushing his engine. Not an easy task. With less difficulty, he could tilt up the engine, slip the bucket over it, tilt it back down, fill the bucket, and flush his outboard while the boat is in the water. No tools required, just a bucket, a rope, and a hose.