You are here: Home / Sailing / A Tour of the Replica of the Caravelle Niña 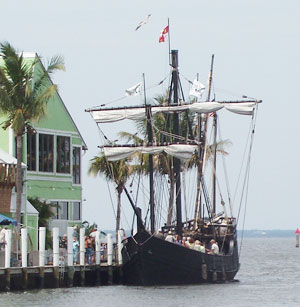 The replica of the famous sailing ship Niña at Fisherman's Village in Punta Gorda, March 2008. 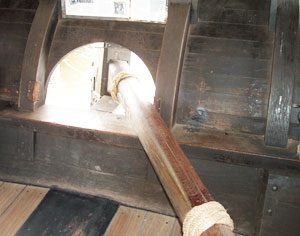 The Niña was a tiller-steered boat. Its large tiller sweeps a broad arc on the steerage deck, which is the only well-protected area in which the crew could seek shelter. 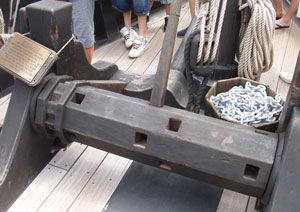 The windlass was a bulky and primitive looking affair, with a large wooden axle in the center that had several holes for inserting the pry bar. There was a wooden ratchet built into one side so that the windlass would not rotate when pressure was released from the prying lever.

I went to see the replica of the famous sailing ship Niña at Fisherman's Village in Punta Gorda, FL, when she came to visit in March of 2008. We have all seen pictures and read descriptions of the Niña, Pinta, and Santa Maria, the three ships that made up the tiny fleet of Christopher Columbus on his voyage of discovery. I wanted to have a look aboard to try to get a feel for what life would have been like crossing the ocean on such a boat in the late 15th century. It would not have been much fun. It was said that the caravelle Niña was Columbus' favorite vessel of the three, and on his various voyages he logged close to 25,000 miles with her.

I was impressed by the size of the timbers used for the mast and the hull planking, both on the Niña replica herself and on the ship's boat, which was built at the same time as the Niña by a 14 year old apprentice on the job site. That ship's boat looks like it has to weigh at least 600 lbs.

The windlass mounted forward on the deck was used to haul anchors or other lines requiring mechanical advantage. It was a bulky and primitive looking affair, with a large wooden axle in the center that had several holes for inserting the pry bar. There was a wooden ratchet built into one side so that the windlass would not rotate when pressure was released from the prying lever.

They had a wooden grate over the main ship's hold area, with a plaque on it explaining that only supplies and animals would have been inside during Columbus' trip; the crew lived, ate, and slept on deck. In the modern replica, they have installed a couple of bunks, and the boat has an engine and electrical system, but other than those alterations, it was very true to the original building techniques and materials. Some galvanizing and other modern preservatives and sealants were used in special situations, but the exhibit aboard the boat showed pictures of the entire boat building process along with descriptions of how the work was done.

I had not recalled that the Niña was a tiller-steered boat before going aboard. It has one heck of a large tiller, which sweeps a broad arc on the steerage deck, which is the only really well-protected area in which the crew could seek shelter. There was a small captain's cabin underneath the forward part of that deck, and I mean really small. It was not much bigger than an average office desk, with a hatch in the top providing the only access and air. The captain would step down onto a board laid diagonally across one corner of the box-like cabin. That desk was also the closest thing to a navigation and writing desk on board the boat.

I left my tour of the Niña replica with a sense of amazement that anyone would set off on a long ocean voyage on such a craft. It does not seem maneuverable or quick, and it has essentially nothing in the way of crew accommodations. It did seem very stout and solid, almost to a fault. Everything on the boat looked to my eye to be at least twice as thick as needed, from the giant keel spine of the boat to the huge hemp rigging lines. I suppose I am used to looking at modern materials. Aluminum spars and stainless steel rigging have reduced the weight and windage aloft significantly on modern boats, so I am not used to looking up to see such things as giant hawsers which served as parts of the web of shrouds on the Niña replica.