You are here: Home / Sailing / Sailboat Reviews / The Com-Pac Legacy: A Review 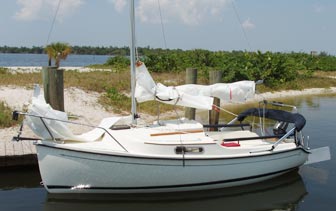 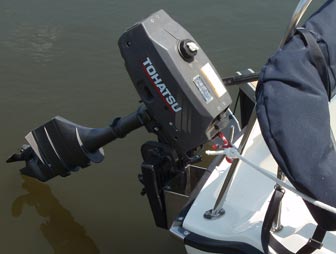 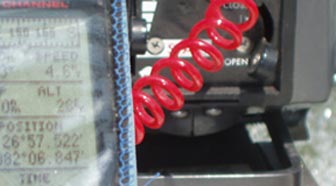 The handheld GPS recorded 4.6 knots of speed from the little Tohatsu at a comfortable cruising speed — and 5.1 knots at full throttle 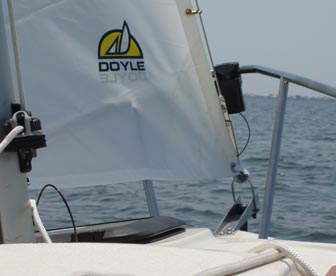 The Legacy has a mast-mounted halyard fairlead (at left in above photo) and velcro jib tack (right), which make sail handling easy. 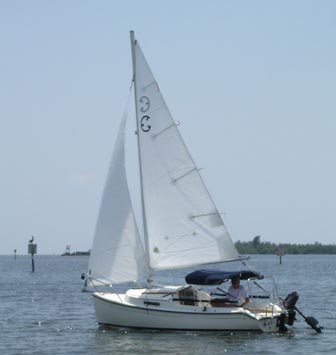 I sailed the Com-Pac Legacy up to the dock single-handed. Small boats are great, and the Legacy makes it easy!

A Test Sail in the New Com-Pac Legacy

Wednesday is small sailboat racing day at our sailing club, when a bunch of small-boat owners with a wide variety of little sailboats converge on the Port Charlotte Beach Complex for some extremely informal racing. Dennis brings his Martin 16's, and there are usually a couple of Sunfish, a Precision 15 or two, a Precision 185, and whatever I decide to bring. Working at a dealership for Com-Pac, Precision, and Hobie sailboats, I have a few sailboats from which to choose!

For one of the small sailboat race days, we decided to bring the new Com-Pac Legacy. The first one was produced less than a year ago, so few people have sailed these boats. I had never sailed one, but we had one in inventory at the dealership. Jim needed a break from the office, and I'm always up for a sail, so we decided that we should go and sail the Legacy, so that we could better inform our customers about the boat. I just love it when I can go sailing and call it work!

Rigging Was Easy — And Fast

When we got to the beach complex about 11:30, only one other sailboat was in the lot, a Precision 185. I parked the truck and began freeing the mast, an easy process on this boat. By the time the P-185 owner had sauntered down to my location, everything was free, and I was up on the boat, ready to move the mast back. The gentleman asked whether I needed any help rigging the boat; I thought to myself how much I love little boats and the innovative folks at Com-Pac, who seem to realize that I don't wish to spend my day at the boat ramp. I thanked him but politely declined his offer, explaining that they made it pretty easy on this boat.

I then picked up the mast and boom, mainsail and all, and walked it back until the mast step lined up with the deck hinge plate. I pinned the hinge and lifted the mast, pinning down the safety pins to hold it up. At that moment, Jim walked up and I handed him the forestay so he could pin it and use the quick rig tensioning lever to pull up the tension on the rig. As he did that, I released the small line holding the boom up against the mast, and let it fall down into position and clipped on the mainsheet. This was all accomplished in just a few minutes, and our friend with the P-185 had a kind of surprised tone in his voice as he remarked that "they really did make it easy, didn't they?"

We hanked on the jib and put on the Bimini top, hung on a fender and a couple of dock lines, and we were backing down toward the water. Launching was smooth and easy, and I did not even have to dip the back end of my truck, as I sometimes have to do on the larger boats. Did I mention that I love small sailboats?

For this mission, we brought along the Tohatsu 3.5 two stroke that we keep around as a shop engine.

With the 20 inch shaft, the lower unit of the engine barely cleared the water when the boat was empty. The engine easily drove the little boat at about 4.5 knots at cruise power, and we achieved 5.1 knots on the GPS at full throttle.

As we got to open water, we raised the sails. The halyard fairleads with cam cleats are great. It was easy to raise the sails from the cockpit. Small boats with light sails are just so easy to sail. A few pulls, no winches required, and the main and jib were set. We found that in light air the boat sailed best with the two of us on opposite sides of the cockpit, which was fine with us, as it kept us both under the shade of the Bimini top.

Winds at that point were light and variable, about 3 to 6 knots, and the Legacy wanted to sail at about 2.5 knots beating upwind or running, and about 3 knots on any other point of sail.

The 20" Tohatsu dragged along slightly, especially on port tacks, since it is mounted on the starboard side of the transom. A 15 inch shaft engine would work fine, or the angle of the bracket could be changed to make the engine come to rest at a higher angle when tilted.

A Jib Track Would Be Nice To Have

I think the boat would benefit from the addition of a jib track, set diagonally from the corner of the coachroof toward the mast. The fixed jib lead is nice and simple, but as the wind picked up a bit, it would have been nice to lead the jib in a bit more. When we were downwind, it would have been nice to have the jib led outboard a bit more and led outside the shroud. To make the switch in strong winds would require two lead blocks on each track, so the lazy sheet could be led through on the opposite side of the shroud.

The mainsheet traveler is just a stainless rod welded onto the stern arch. The sheet clips on to the rod with a snap shackle. We found that in light air, it would stay where you put it when the sheet was tightened, and not slide back and forth. When tacking, and when the wind picked up, it did tend to slide to the downwind side. I think it would benefit from the addition of a couple of control lines with cam cleats on each end, so that you could fix it in the desired position.

We were having a great time sailing the little boat, and found that it would sail at speeds over 4 knots easily when the wind came up to 8-10 knots, but had to return to shore. When we got close, we sailed up to the beach, and Jim stepped ashore to take a few photos.

Jim did not make it around to the dock in time to catch me on the way in, and since it was a very short distance and winds were favorable, I decided to sail in to the boat ramp dock without firing up the engine. I was able to bleed off most of my speed approaching the ramp, reach up and release both halyards, and then make one last course correction as the sails came down and the boat glided to a stop within easy reach of a dock piling. Small boats are the best, and for single handed docking under sail, the smaller the better!

Newer: A Tour of the Replica of the Caravelle Niña
Older: Fishing: Competing With The Sharks for Wahoo and Yellowfin Tuna