You are here: Home / Fishing / Fishing: Competing With The Sharks for Wahoo and Yellowfin Tuna

We had departed Cat Island in my CSY 44, bound for Miami after 72 days in the Bahamas, and were making good progress sailing around the outside of Eleuthera. We did not see much boat traffic in this area, but it was full of other life. Gene put out one of his favorite artificial lures on his trolling rod and set it out. Life was good. 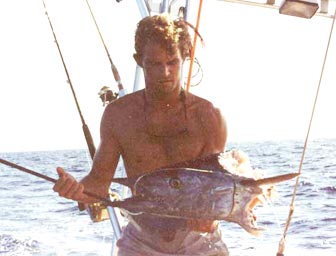 The sharks left us nothing of our world-record Wahoo except the head! 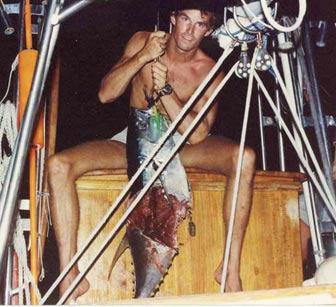 Sharks tried to steal our tuna, too.

We sailed along for a while with no action, and I had gone in to the nav station to check on our position when I heard the drag on Gene's rod start screaming. He scrambled to get it out of the holder and into his fishing belt, and by the time I looked up, he was bending that stand-up fighting rod into a U and pushing on the drag lever of the Penn International as line peeled off.

It's a pretty big rod, about the largest you really want to handle without a fighting chair. We had never had a fish on that really challenged the rod. I thought to myself that I was about to either see the reel melt down, or I would see whatever was on the other end strip the reel entirely and break the line. It did not help that we were still chugging along under sail, so Conor and I furled the jib and pinched up enough to luff the main so that the boat just kind of wallowed in the water, making only 2-3 knots. We brought the dinghy up close on the tow line, so that Gene could fight the fish over the top of it.

As the boat slowed down, Gene started to win the fight back on the aft deck. We had not yet seen the fish, only some splashing, but it was obviously tiring out after the long initial run. He started to make some progress getting line in, and then suddenly the fish came back to life. It took out line powerfully, despite the heavy drag setting, then settled down again.

The process repeated a couple of times, and we saw a bit more splashing back there, but the tide had clearly turned, and it looked like we would land whatever we had hooked pretty soon. Straining to see down the line as I readied my largest gaff, I finally caught a glimpse of something. It looked like a sharp mouth coming across the surface, possibly a tuna or wahoo, definitely not a billfish of any kind.

The fish was clearly tired. Gene was dragging it up to the boat along the surface, the mouth occasionally coming out as it came toward me. It was not fighting very hard, mostly just dead weight back there at this point.

As he brought it close to the boat and I adjusted the gaff in my hands nervously, I was thinking about how I would do this. The aft deck of the CSY 44 is pretty high off the water, and I had a 6' gaff, barely enough for the job. This would probably be the biggest fish I had ever gaffed, the biggest fish Gene had ever caught, and the boat record, all in one. I did NOT want to miss my shot with the gaff, and possibly lose the fish. I strained to see just what I would be hooking aboard, and how big and heavy it would be. The fish was getting close now, and I was amazed by what I saw.

We were about to catch a wahoo head. That's it. Just the head. The sharks had taken the rest. When that fish finished the quick initial run, it was torn apart almost immediately by sharks, and all the secondary fighting we thought we were seeing was just the feel of sharks grabbing the carcass and tearing off pieces as we sailed in the other direction at 2-3 knots. The head weighed 17.5 pounds when I gaffed it aboard. We didn't think to take close measurements of length and circumference, but have estimated the size of the wahoo to be over 100 pounds, based on comparisons of our photos to pictures of record-class wahoo.

Later that afternoon, we caught a yellowfin tuna, with similar results. Pieces the size of my head were missing out of the fish when we landed it. What remained weighed 37 lbs. We landed a smaller one intact, probably because that fight was very brief, as the fish was no match for the rod.

Rounding the outside of Eleuthera makes for great fishing, but is not a place to go for a swim. Those sharks were all over the place, and were on the scene of our fishing action very quickly. I can see why Hemingway brought along a machine gun.

Newer: The Com-Pac Legacy: A Review
Older: How To Sell Your Boat for the Best Selling Price