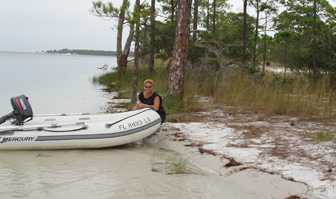 We took the dinghy to go exploring on Dog Island, which seemed like a land that time forgot. 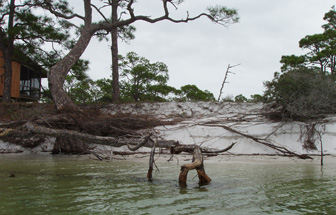 There was much hurricane erosion in evidence on Dog Island. 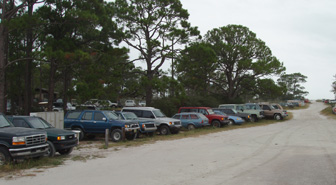 There were more cars on Dog Island — junked out and rusting in the salt air — than either people or buildings. 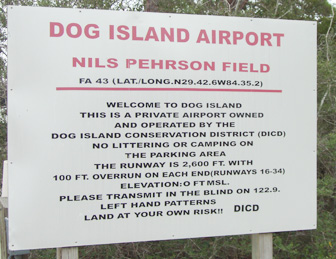 Surprisingly, we found an airfield.

Even more surprisingly, there was a plane. 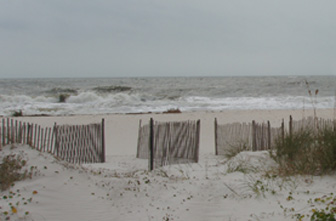 A horrific surf was still pounding the south side of the island. We were sure glad to be tucked in safely in our quiet anchorage on the north side. 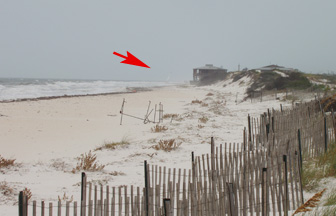 We spied a grounded sailboat way down the beach — but we couldn't make it down there to see what was up.

A large bundle of pilings and a crane told us that the risk of hurricanes hasn't completely deterred construction of new beach houses on this barrier island. 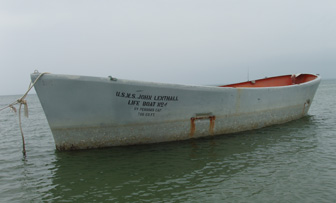 We passed an old US Navy lifeboat on our way back to the Charlie K. 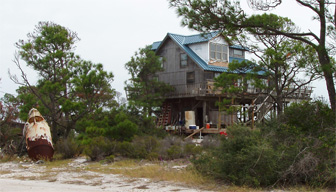 There's no telling what you'll see in Dog Island backyards. 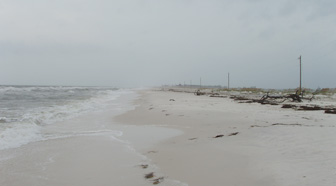 The narrow western end of Dog Island was just a very narrow strip of sand, about 100 feet across. It had obviously been recently awash in places all the way across.

After a good night's sleep, I was surprised no one else was awake, and began exploring the galley. Ginger had brought half and half, sugar, and honey especially for me (the high-maintenance coffee drinker), so I located those things and made a pot of coffee. That will get the rest of our crew up every time, and it didn't fail this time. Soon, I was enjoying a cup in the cockpit as Ginger made pancakes, bacon, and eggs, accompanied by bananas from one of my dwarf banana colonies back home. All of it together made the previous night's crossing worthwhile. Well, kinda sorta. Maybe. No, not really, but it's an inevitable part of sailing.

That crossing ranks number three in my personal list of long, miserable night crossings, behind a trip up from the Keys beating into a north wind on the edge of the Gulfstream aboard an Express 37, and another Gulfstream crossing on that same Express 37, returning from Rainy Time in Abaco, jokingly referred to as Regatta Time in Abaco. As far as I'm concerned, crossing large bodies of water on a sailboat ranges from boring through miserable to terrifying — crossing large bodies of water should really be done via commercial airliner, but now we were getting to the good part that makes the crossing worthwhile.

Sonja and I took the dinghy to explore Dog Island. It was still very windy, and I did not have complete faith in Jon's little outboard, nor did I wish to try out the little dinghy oars in those winds, so we went directly upwind from boat to beach, then remained only a few feet offshore while traveling east along the northern shore of the island. We could tell that a hurricane had recently passed through the area. There were lots of dead pine trees standing along the shore and in the water, root systems completely exposed by erosion, looking like big mangroves. Many of the houses showed some hurricane damage, some repaired, some not.

There were boat parts strewn along the shoreline. Schools of baitfish jumped everywhere, obviously being chased by predators, and the occasional pelican dove on them. One was quickly followed by a seagull, who actually lit on the pelican's submerged head. The pelican, obviously wise to this ploy, kept his head under water for a while as he swallowed, something I had never seen before.

Most of the way down the island, we encountered a very small inlet, leading to a bayou within the island. I resisted the urge to turn in, at least for the moment. We continued down to a bay where the ferry comes in, and turned in there. Two sailboats lay on moorings, one with no boom at all, the other with the boom lying on the cockpit. It seemed neither had been touched for some time.

At the end of the bay were docks, one with a large work vessel moored alongside, and an array of obviously very recent docks with some powerboats tied up. On land was an astonishingly large collection of cars and trucks, each one more rusted and junky than the next, except for a few nicer ones, and one which had a custom canvas cover. I was surprised to see a wind sock, and more surprised to pick out an airplane over on the shore. Sure enough, Dog Island has a runway. The sign said it is 2,600 feet long, with 100' overrun at each end, and it is at zero feet MSL. Even by Florida standards, that's a low field elevation.

We wandered over to the south side of the island, which was being pounded by horrific and confused surf, due to the strong winds from a couple of different directions in the past few days. Dog Island also has an Inn and a Yacht Club, though it still appeared to me that cars far outnumbered buildings on this island. Strange, for such a small island, with only one road.

On down the beach, we could see what appeared to be a beached sailboat of perhaps 30 to 35 feet, being pummeled by the surf. It looked like it had not been there long, was reasonably intact, and still had a roller furled jib attached. It was about a mile down the beach, and I didn't want to wander that far away from Jon's dinghy, though we had yet to see another human on the island who might either do something to the dinghy, or object to where we had tied it to a piling at the end of the work boat dock. Also, we had been gone quite some time by then, and though we had a radio, I didn't want Jon and Ginger to worry about how long we had been away.

We got back in the dinghy and pulled out of the bay and started back down the shoreline, at which point a bald eagle flew out of a nearby tree and circled over us a couple of times. We arrived back at the tiny bayou inlet, and this time I could not resist the urge to turn in and explore a little. We spooked quite a few fish of various sizes in there.

Lots of life all around, and interesting sea grasses I had not seen before. The bayou turned out to be rather small, only a few hundred feet in the long dimension, but very picturesque with lots of birds, a ring of sand and trees around it, and lots of sea life of all kinds swirling about in the shallows.

As we continued back down the beach, we saw a large bundle of pilings which had obviously been landed ashore by a barge, and in the background was a crane. Apparently the risk of hurricanes has not completely deterred construction of new beach houses on this barrier island.

US Navy Lifeboat: Not Very Comfortable, But It Would Be Better Than The Alternative

Sonja took a turn steering the dinghy as we passed upwind of the Charlie K and approached an old US Navy lifeboat anchored near the shore. The lifeboat's side lettering said it had a capacity of 69 people, but Sonja remarked that she wouldn't want to share such a small craft with 68 other souls. I agreed, but we also agreed that if you wound up in the thing, it would beat the alternative.

The lifeboat no longer had a rudder or propeller, and probably no longer had an engine, but we didn't get close enough to stand up in our little craft and look inside.

We continued west to a part of Dog Island which is basically a very narrow strip of sand, maybe 100 feet wide from high tide line to high tide line, and which obviously had been recently awash in places all the way across.

Some houses were built all the way out there, but it looked like a bad idea to me. One had cement around the pilings which were now hanging a few feet above the sand, but which had apparently been sunk into the sand at the time of construction.

We took another look to see if we could spot the beached sailboat from that direction, but it was around the corner from us, and we again didn't venture down that way to check it out.

Back on the Charlie K for Repairs, Dinner and Bed

Back at the boat, Sonja re-boarded Charlie K, and Jon and Nicki the Navigator got in the dinghy with me for canine shore leave. While ashore that time, we did see two people walking down the beach some distance away, and one guy working on a roof. Other than some recent footprints Sonja and I spotted back at the Dog Island Yacht Club, and a few lights visible at night, those were the only signs of human life on the island.

With shore leave concluded, doggy duly emptied, and our time here done tomorrow, Jon and I took the outboard off the dinghy and hung it back on the stern rail. Everyone read for a bit, then we set about fixing the compass light.

It's not really a cruise if you don't drag out tools and fix something while at anchor. As with many older boats, the electrical spectacle left by previous owners was a bit confusing at first, but I found the broken wire that was the source of our trouble and tapped it into the 12 volt outlet on the pedestal to restore power to the compass light. The next person who looks in there will be a bit more confused, but at least the light now worked.