You are here: Home / General / Trail Camera Pictures / A Couple of Bobcat Visits to Chickens 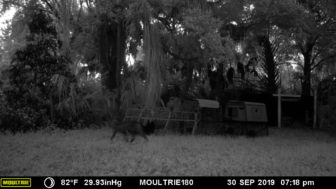 We like to watch the sun set over Shell Creek every evening and then return home and close up the chickens in their coop for the night. Last night we showed up and Kailey the Cowdog suddenly alerted to a scent and took off across the yard. I was wondering whether our trail camera had captured whatever set her off and it did. 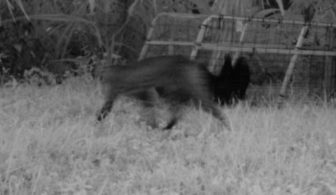 I got several bobcat pictures just after 7 pm. The appears pretty dark but the image at left is cropped in and lightened a bit so it shows up better. In the background you can see that our chickens are hanging around in the end of their run just a few feet from the bobcat. I guess they have great faith in the fencing! 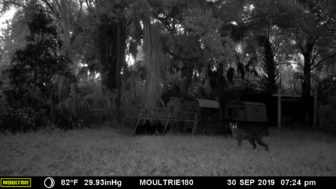 There were quite a few more pictures in the ensuing 13 minutes with the bobcat prowling all around the coop but the bobcat just looks like a black blob in most of them. The picture at right was taken right about the time that the bobcat would have heard us approaching the yard and it's looking that direction.

The cropped and lightened version of that one. The chickens continued to hang around out in their run through all the intervening pictures, apparently going to sleep in their coop only minutes before we arrived. I'm pretty sure the bobcat was trying to reach them through the cage and I did find a couple of tail feathers on the ground so maybe it was almost successful. All four are fine this morning. 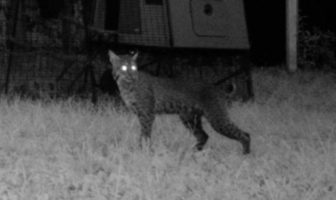 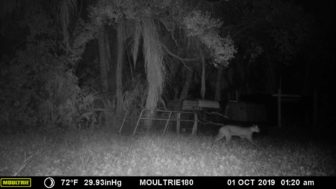 I wondered whether the bobcat would return late at night. Yep. I got a few pictures of it slinking along the pond drainage ditch and this picture of it right next to the coop.