The pond in my yard is fed by an artesian spring from the Lower Hawthorne section of the Florida Aquifer. It's not exactly fresh water, though it has cypress trees all around. My tropical fruit trees don't like the water much but it's acceptable to citrus trees, which have a relatively high tolerance for lousy water. It's not exactly salt water either, but mangrove trees and many salt water critters thrive in it. The water coming out of the spring is nice and clear, always around 70 degrees, and almost completely free of dissolved oxygen. It makes a great swimming hole! 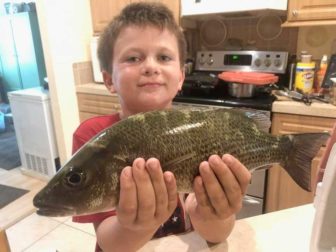 Friends and neighbors sometimes catch fish in the creek or the harbor and put them in my pond. This has resulted in an interesting diversity of life but also a few problems. Someone put three tiny mangrove snappers in there and they were great fun to watch. Three bandits always looking for trouble, they'd follow me around hoping I would scare some unwary prey their way. This worked well for them, and before too long I had three snappers that were too big for the pond. It's like a big aquarium and does have a carrying capacity. I decided they had to go and they went from pet status to potential dinner. Last summer, our grandson got the first one, which measured 16 inches. A neighbor came over and caught the second one, which was a bit bigger.

The last one has become a real problem. It's too smart to catch on hook and line and while it used to be completely fearless and swim right up to my face, it has learned that humans in the water are a threat. I took a swim with my Hawaiian sling the other day to see if I could spear it. To my surprise, I actually got two shots at it, though the second one was a Hail Mary and almost cost me my spear. The third time I saw it, it ran away very fast. It's a small pond and I hunted around for another hour but didn't see it again.

I kind of figured that might happen so I brought a waterproof camera along so I would at least have something to bring out of the water. Here's a 2 1/2 minute video: 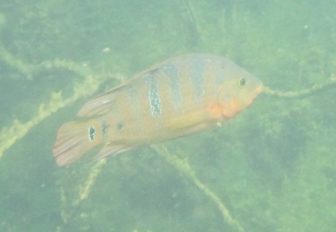 I took a few still shots of some of my favorite fish. At right is a Mayan Cichlid, one of those invasive exotics that plague Florida waters. They may be pests, but are also beautiful and delicious. 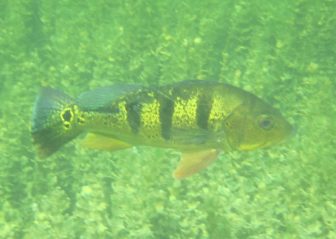 Another pretty fish that isn't really supposed to be here is the Peacock bass. 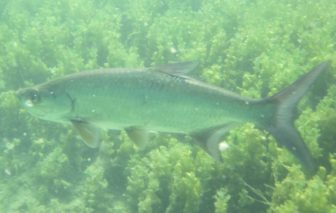 I'm not sure how this tarpon got in there. I've asked everyone and no one will admit to having put it in the pond. I would not have allowed it had I known, mostly because it's too big. A fish that size has trouble finding enough to eat in a pond this small, so I feed it chunks of finger mullet, as shown in a previous post. Maybe a bird dropped it here? 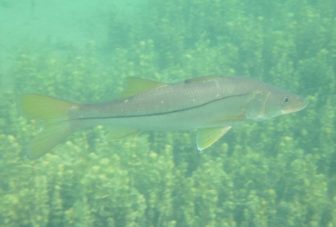 There are a few snook in the pond (the birds are very busy, I guess) and one of them has figured out the tarpon feeding routine. The tarpon is much faster and more aggressive about feeding, but is also stupid and misses a lot. The snook is not quite as fast but doesn't ever miss, so winds up getting a lot of food that is intended for the tarpon. It's a very fat snook.