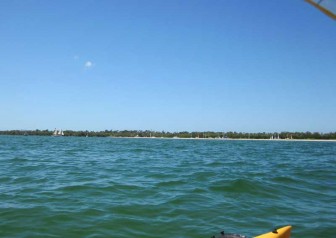 The West Coast Trailer Sailing Squadron is a group of Florida sailors who like to gather in different locations to camp out on small boats. I have been aware of the group for several years, but have never made it to one of their cruises. At the urging of founder Ron Hoddinott, I decided to go to the Spring 2012 Pelican Bay gathering. We could not take the Sun Cat and go for the whole weekend, so I trailered an Adventure Island down to Bokeelia on Saturday and sailed out there for a lunchtime visit.

Approaching Pelican Bay, I could see a cluster of small masts up around the north end beach and a small gaff-rigged schooner sailing out. 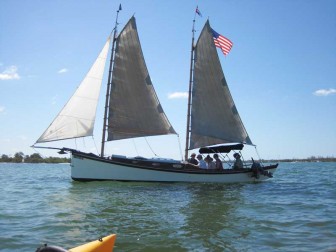 As I was coming in along the beach, the little schooner crossed tacks with me. The light was all wrong, but I could not resist taking a picture anyway. Her name is Egret and one of the guys on the beach later told me the boat is actually old and has been restored. 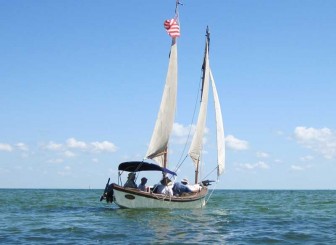 As I got past Egret, the light was better for a picture of her sailing upwind. What is not obvious from the picture is that the boat is sailing out across a well-known sand bar that stretches across the northern entrance to Pelican Bay. It was moving nicely along in light wind and shallow water, just like a boat in this part of the world should do! 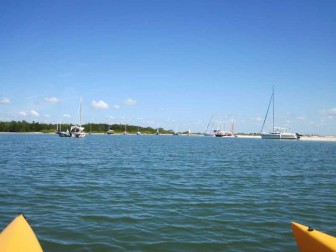 This was the scene as I turned up behind the spit of sandy beach that protects the northern end of Pelican Bay. The beach is fairly well covered with sailboats of all kinds, with a few more anchored out. There is a Hunter and a Sanderling catboat in the foreground, and beyond are a bunch of Sea Pearls, a couple of sailing canoes, a couple of MacGregor 26X's, a Sanibel 18, another Sanderling, a San Juan 21, a couple of Peep Hens, some custom boats and probably a few I am forgetting to mention. How have I been missing out on this for all these years? 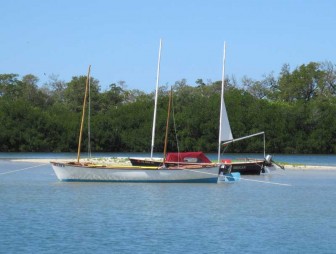 I got a little lesson in the history of the Sea Pearl 21 design. Over on the western side of the bay were old and new, side by side. The old one in the foreground has wooden spars and a gaff rig, while the newer version behind has a Marconi cat ketch rig with mast-furling sails. There were quite a variety of Sea Pearls on hand, including numerous trimarans. Most of the tri's had straight aluminum tubes for aka beams, but one of them had shaped akas that ran over the top of the boat instead of through it and then dropped down to the amas. I guess the ones with straight beams sometimes drag their beams when pressed hard. 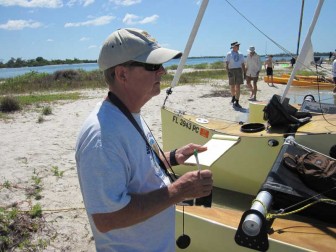 Even a relaxed event like this one does not just happen spontaneously, someone has to organize it. It was nice to put a face with the name Ron Hodinott as he came around with his roll call sheet to see who I was and mark my name down. Thanks for keeping this group going! 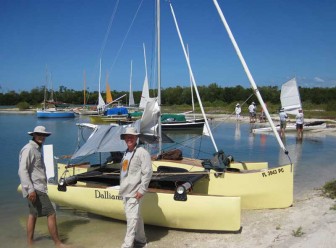 The boat next to Ron in the picture above is a little homebuilt trimaran named Dalliance. I spoke to the owner of that boat for a while, first questioning his choice of a cutter rig. He explained that he was a glutton for punishment and liked to have a lot of strings to pull and a lot of sail options. He had built this boat with the thought that it might be a good one for the Watertribe Everglades Challenge, but it looks a bit weak in the "human propulsion" area to me. He said he was enjoying just doing little cruises like this one and had really lost the desire to do a difficult event like the EC. 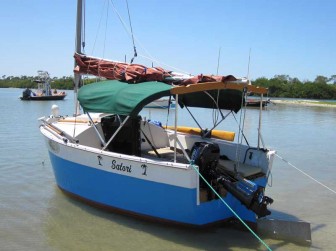 The Peep Hen is another boat I had never seen in person, so I took a walk over to have a closer look at a couple of them that were on the beach at the north end. It's a boxy-looking boat, but very practical on closer examination. Small boats tend to be wet, have low headroom, and have a tiny companionway. They seem to have addressed all those problems pretty well, and the result turns out boxy-looking. This one has a kick-up rudder, but the other one has a very shallow rudder that extends at the depth of the keel and has an end plate on it. It could sail in only a few inches of water, if the destination were downwind. 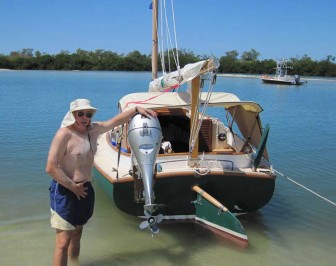 Catboat Willy and I were trying to impress the bikini-clad chicks on the powerboat in the background. We met with about the level of success you would expect. 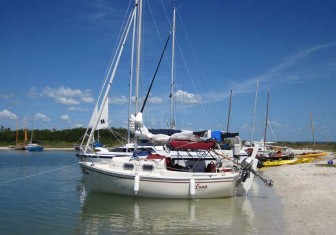 I had never seen a Sanibel 18 in person, and took the chance to get a closer look at Luna. She's a neat little boat with a pleasing shape and looks dressed up with those nice metal opening ports. A couple with two young kids were cruising aboard her and the woman approached as I was taking pictures. She said they were really enjoying the boat and told me a bit about the production history. 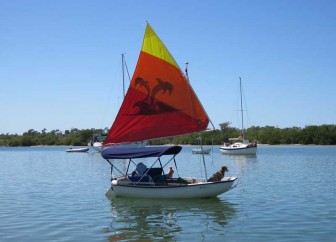 When I was growing up a friend of my brother's had one of these: a Boston Whaler Squall 9. It had a little outboard engine, but could also be sailed or rowed. The ability to sail or row got them out of all kinds of trouble back then.

People who have trouble relaxing should take lessons from that guy. He was sailing slowly around the anchorage under the Bimini top with the little dog standing guard on the bow. The boat may look a little silly with the sail stuck way up in the air like that, but it sure looked like a nice way to tour the bay. 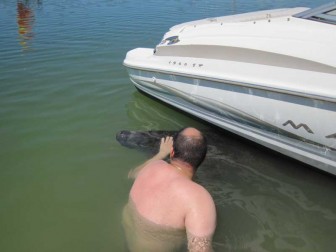 There was a group of people clustered around a small powerboat down the beach and I heard someone say something about a manatee down there, so decided to go check it out. Sure enough, this manatee had decided to cool off in the shade underneath the boat and seemed to be enjoying being petted by all the people. They were rubbing the algae and stuff off the leathery skin and the manatee was scrubbing itself against the boat a bit as well.

Just down from the manatee petting area, Egret had returned from sailing and was on a little sand bar sticking off the beach. Yep, definitely a shoal draft vessel! 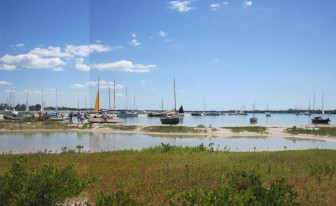 I stitched together two pictures to get all the boats in this shot taken from the north end of Pelican Bay. 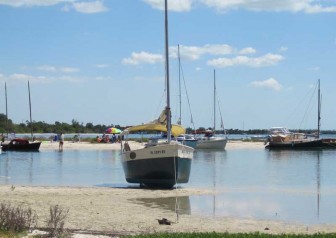 This is the other Peep Hen, whose owner was aboard when I walked up. It apparently arrived here on a higher tide. This one had the rudder with end plate at the depth of the keel. I talked to the owner for a while and he asked me how I got out there. I pointed across to my Hobie Adventure Island, figuring that a man who appeared to be at least 70 years old would probably not know what one was. He told me that he also owned one. While we were talking, one of the Sea Pearl owners walked up to join the conversation. He also asked me how I got there, and it turned out that he was another Adventure Island owner. He had attempted the Everglades Challenge in his, but had to abort around Marco after 5 days. We talked a bit about what life is like when you wear a drysuit for 5 straight days. It is still not on my bucket list. 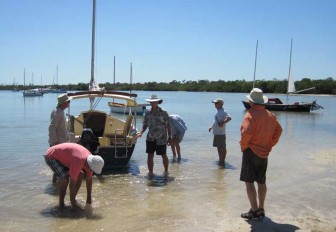 Although the tide was higher when the boat arrived at that spot, the picture above was taken almost at high tide. We have strange tides around here. The next really high high tide was scheduled to occur after dark, so a determination was made that now was the time to move the boat into deeper water. A team of guys quickly appeared and started dragging the little boat toward water. The little end-plate rudder was hanging us up, so it was removed. Once it was off and we got the boat spun to point out, moving it out was no problem. 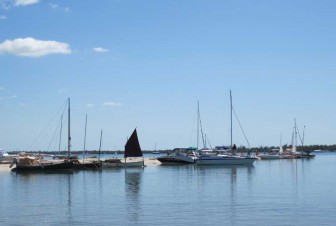 Walking back around the bay from the Peep Hen refloating operation, I took a look at my watch and realized it was time for me to depart. It would take at least an hour to get back to the ramp at Bokeelia and another to drive home, but I did not feel like pedaling like mad for an hour and wanted to sail home. With a light opposing wind and the tide turning against me, that would take a couple of hours. As I was leaving, I took this picture of an old MacGregor sailboat named Mental Floss just arriving. Great name, and a good description of how the event felt. I need to start attending these WCTSS gatherings! I checked the website, and the next one is at the Cortez Small Craft Festival, an event I attended last year to see all the funny homebuilt boats. 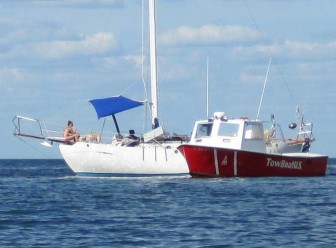 As I left Pelican Bay, the wind died out and I had to pedal across the channel and up onto the flats, but then it came back and with just a few lulls I had enough wind to sail home. It was mostly on the nose so I took a few long tacks and pedaled a bit in the light air, but I had a good time sailing across the flats in the clear water. As I approached the north end of Pine Island, I heard a motor revving in the distance and could see a small flats boat attempting to free this sailboat. I could see some white water flying, but the big sailboat did not move. The flats boat then took off at high speed and ran over to a nearby TowBoat US vessel. Soon the tow boat was headed over to the stuck sailors.

As I went by, I could see a man from the sailboat boarding the tow boat as the woman and dog went forward. After a while, the man got back aboard the sailboat and the tow boat left the area. Maybe his price was too high? I'm not sure. The tide was falling, and if that boat did not move soon, it would not move until late at night. I expect that is what happened. The boat appeared to be in the channel and should have had six feet of water where they were, but it was a double-ender of a style that did not appear to be from around here. It may be from a deep water location and have a draft of six and a half, which would be the difference between being able to depart on the daytime high tide and the nighttime high tide in this particular place.

Another video made by a WCTSS gathering participant: