You are here: Home / Boat Repairs & Upgrades / Installing a Boomkicker® K0750 on a Com-Pac Sun Cat 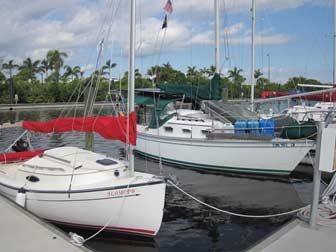 Catboat Willie and I went over to Laishley Park Marina to help our friend Craig put his new Boomkicker® K0750 on his Com-Pac Sun Cat, Cattitude. I had previously installed a couple of Boomkicker 400s on Precision 185 sailboats, so that made me "the expert" on the subject.

It turns out that the two models attach to the boom differently, and installation is so easy that my "expertise" was hardly necessary.

I got there a bit before they did and was wandering the dock, checking out the overloaded cruiser in the adjacent slip. That boat was on its way to the Bahamas when a propane fire injured the owner and changed their plans. Next to it is a Cape Dory 27 that does not appear to have been touched in at least a couple of months.

Boats that are waiting for some kind of attention remind me of abandoned puppies for some reason, and a marina can be a sad place. 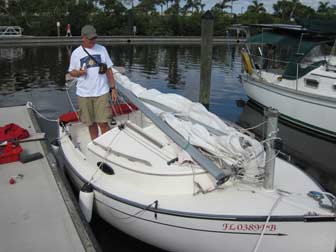 Before I got too depressed about the perpetual mismatch between boating dreams and reality, Craig and Willie showed up and we got started on the Boomkicker installation project. The first step was to remove the mast and booms from the mast stub so that we could slide the Boomkicker attachment fitting down the mast track. I think Craig had never had the mast off of his boat, as he seemed a bit unsure of the procedure. That part of the job made me really glad that we were working on a Sun Cat. Hinge the mast down, remove the two bolts that serve as hinge pins, and mast and booms just lift free from the mast stub. 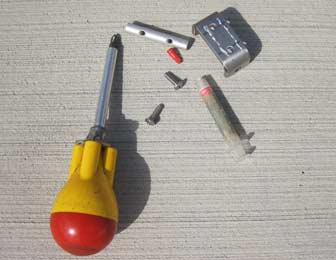 At the mast end, the Boomkicker® K0750 attachment is a stainless plate with the ends bent out to hold a vertical pin and an aluminum rod with two threaded holes. The plate rides down the aft side of the mast and the aluminum rod riding inside the mast track provides the backing to screw it tightly to the mast. The stainless plate and screws attached to an aluminum mast and rod in the presence of salt water is going to cause electrolysis over time, so to limit the damage, I coated all the pieces in Tef-Gel, an incredibly slimy substance that is designed to form an electrical barrier membrane between dissimilar metals. I have not evaluated it over a long enough time to verify that it works, but it sure seems like it could when you are trying to clean it off of your fingers! 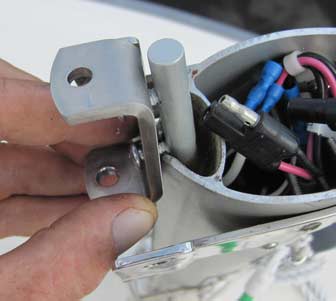 With the pieces properly gummed up with Tef-Gel, I went to slide the attachment down the mast track and encountered our first difficulty with the operation: The slot in the mast track was just slightly smaller than the diameter of the stainless screws!

We considered a couple of approaches to deal with this problem. Filing the threads off of the screws up near the top would have provided the required clearance. We also thought about drilling and tapping smaller holes in the aluminum rod and getting the next size of stainless machine screw down. Ultimately, the desire to get on with it prevailed, and we decided to go with the brute force approach. 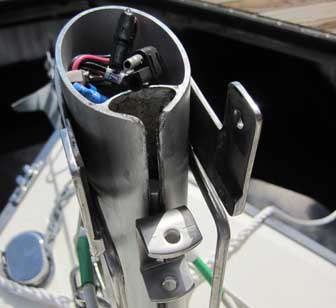 The slot was almost wide enough, and aluminum is not all that hard... hand me that hammer! With gentle tapping, the fitting slid right down the mast track. Click the image to enlarge, and you can see the shiny aluminum at the edge of the slot where the screws widened it a little bit as they went down. Scratching the anodized finish off of a mast is generally not a good idea, especially around salt water, but that area of the mast is constantly scratched by the stainless boom goosnecks and sail slides anyway.

How far down to tap this thing? I do not believe the exact position is critical, so I just took a guess at when to stop and it worked out well. The final position of the lower fitting is just below the halyard blocks, and when the Boomkicker is released from the boom, it lays flat across the forward hatch, contacting both forward and aft edges of the hatch. 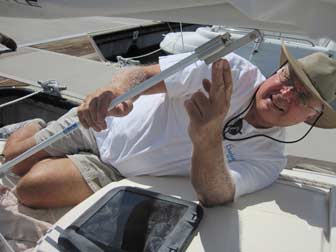 The Boomkicker is attached to the mast fitting via a pin and split ring, and with that in place, Catboat Willie swung into action determining the position of the track on the boom. Yep, we all agreed that the center of the track should be right about there.

Boomkickers utilize a slide track and car for attachment to the boom so that the boom can rise above its "natural" height without being stopped by the Boomkicker. It only prevents the boom from going down, and a vang is still needed to keep the boom from rising on most boats. The Boomkicker is strong in compression, but not strong enough to act as a vang, so the track is there to allow the boom to rise unimpeded. 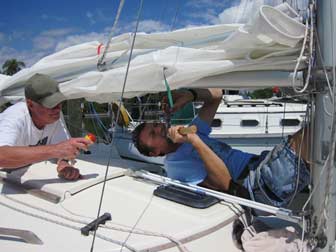 Once we decided where it should go, I got under the boom to punch marks for drilling. Craig was standing by and putting all the right tools in my hands, and before too long we had all three holes drilled and tapped. We did a preliminary test of the unit, and found that our guess on positioning had been wrong. The track was too far aft, and the Boomkicker did not lift the boom clear of the gallows, the main thing we wanted it to do.

The three holes in the boom track are evenly spaced, so moving the Boomkicker forward a bit on the boom just involved drilling one more hole forward and abandoning the aft one. Craig asked me how to fill that hole, and my response was that I would not bother. Anything used to fill it could only trap salt over time, and left alone, it is just a bit more ventilation and drainage for the boom. The boom on our Sun Cat has quite a few holes left over from a previous lazy jack installation, and I have just left them open. 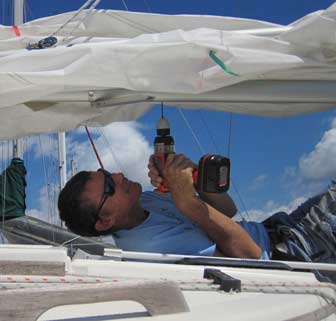 In this picture, I am drilling what was to be the forward hole, but became the center hole for the boom track once we figured out the proper position. The track is swung out to the side to keep it out of my way. 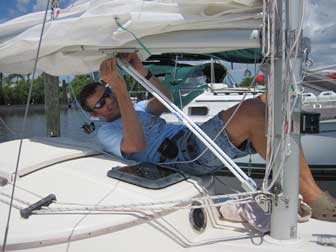 This picture was taken during final attachment of the Boomkicker in the proper position. You can see that the track is a bit further forward relative to the riveted fitting on the boom behind it. This one was taken after we got the position right. The Boomkicker track has three sets of holes at the aft end, and a pin is put through one of the three sets as a stopper for the car. The pin is in the middle hole in this picture. It could be moved forward to provide a bit more lift, or aft to provide a bit less. 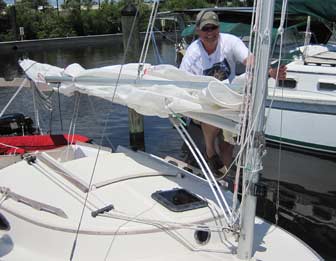 That's a happy sailor! With the sheet eased, the Boomkicker was supporting the boom a few inches above the gallows. Pulling it down into the gallows with the sheet resulted in a slight bend to the Boomkicker's support rods. The boat list on the Boomkicker® website was right that the K0750 is the proper model for a Com-Pac Sun Cat. It is strong enough to easily hold the weight of the booms and sail. 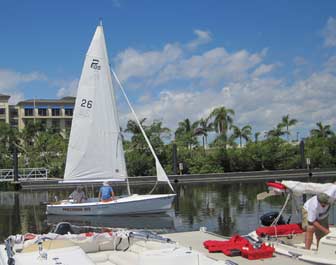 We did not have time to test-sail the boat with the new Boomkicker installed. Considering that there was barely enough wind to move this Precision 185 that happened to sail out as we were cleaning up, it was not a great day for testing anyway. Craig has gotten to test it under sail since, and reports that it works fine, does a great job of acting as a topping lift, and serves to stabilize motion of the boom in choppy conditions.

As mentioned, the Boomkicker is not intended to act as a rigid boom vang. It is more of a rigid topping lift, and a separate vang is still as needed as before. In my case, that is not very needed, as I have been intending to install a boom vang for over a year now. When I do, I do not think I will add a Boomkicker, just because I already have lazy jacks that work as a topping lift.