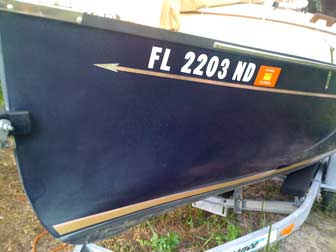 Making our Com-Pac Sun Cat shiny and easy to clean

The original owner had waxed the hull of our Com-Pac Sun Cat, the Wily Conch, twice a year, but still the dark blue hull showed the effects of the Florida sun, especially on the port side of the boat, which was exposed to the sun much of the time.

I really like white boats because you can't see how faded and oxidized the gelcoat becomes over time, but since I have a blue boat and Sonja likes the color, I might as well make it look good.

I do not want to hire a professional boat detailer, so I have to figure out what will work for me. My first attempt was to give the boat a bath and then use 3M Restorer & Wax applied with a power polishing buffer. 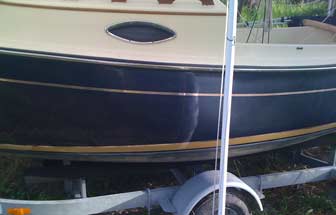 Waxing the hull topsides on the Com-Pac Sun Cat.

Restoring the shine on the hull with the 3M Restorer & Wax was fairly quick and easy, but not all that long lasting. I waxed the whole boat in August, and reapplied wax to the port side in December. It was still making water bead on the hull, but was starting to show the fading of the dark blue gelcoat. 3M Restorer & Wax has both rubbing compound and wax in it, and as the mixture dries while buffing the rubbing compound comes off or gets smoothed into the shiny wax layer. 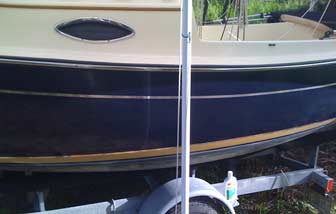 I did a couple of feet at a time, and it went pretty quickly until I got to the transom, where the motor bracket, rudder, and boarding ladder all interfered with buffing using the power polisher. I would not want to shine the whole boat by hand. 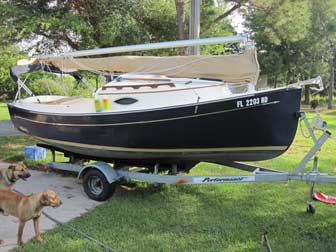 On the recommendation of some of my friends on the Trailer Sailor Forums as well as Practical Sailor magazine, I decided to try using Poli Glow on the dark blue topsides of our Sun Cat. I had used it once before on a dark green Com-Pac Horizon Cat, and it made quite a difference on that boat with very little effort. There was still some wax remaining on the hull from my previous application of the 3M product, but some fading in the hull color was becoming visible, especially near the bow. 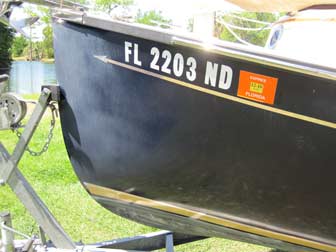 Faded and oxidized gelcoat on the port side of our Sun Cat, prior to removal of the remaining wax I had applied 4 months before. This boat lives under a shade tent with sunscreen fabric sides and was not used during that time period. 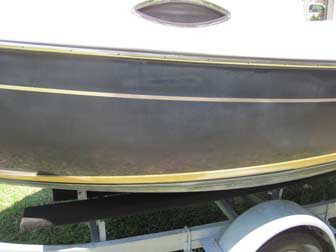 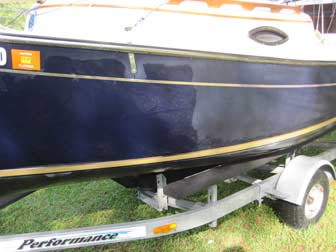 Using Poli Prep to clean and dewax the hull

I bought the Poli Glow kit, including a bottle of Poli Prep cleaner/dewaxer with a soft scrubbing pad. This is a powerful cleaner, and users should heed the warning to wear gloves and eye protection. Use it like any other cleaner: wet the hull, spray with diluted Poli Prep, scrub, and rinse before it dries up. In the picture to the right, the hull has just been rinsed, and the shiny parts are where the Poli Prep has removed the wax. The water is still beading up on the parts that appear dull in the photo. 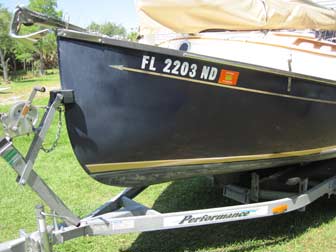 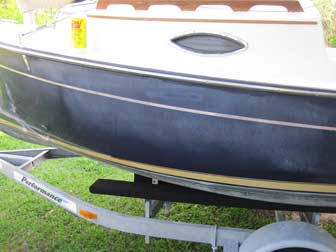 These photos show the blue gelcoat of our Sun Cat after I used Poli Prep to clean and strip the wax from the hull prior to application of Poli Glow. Poli Glow is not compatible with wax, and it's a good idea to follow the manufacturer's recommendation to use Poli Prep to thoroughly clean the boat before applying Poli Glow.

In the case of a badly oxidized boat like ours, it would be a good idea to also use Poli Ox and/or 600+ wet sandpaper to remove the worst of the oxidation, but I decided to see how the Poli Glow would do without removing any more gelcoat. 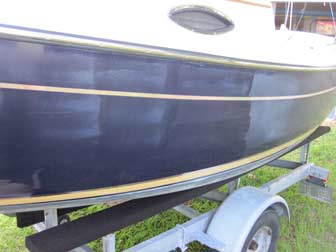 The first coat of Poli Glow looks streaky and uneven, but that is normal. It takes several thin coats before the polymers produce a uniform shine. Take care to roll the applicator on and off gently with each stroke and maintain a wet edge as you work in sections of a foot or two in length. Do not soak the applicator with too much Poli Glow, as a thick layer will be more prone to streaking. The applicator pad should move with little friction when wiping the product on if it is properly loaded. When it becomes hard to move, add more Poli Glow and let it soak in before resuming application. It is a bit like varnishing with a foam brush. 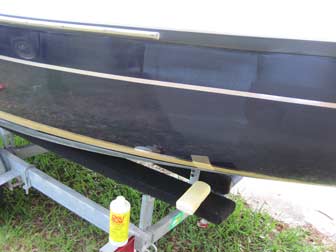 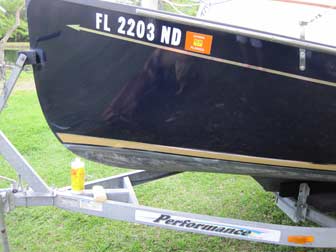 I lost count of exactly how many coats of Poli Glow I applied to the hull, but guess it was about 8 or 10. It is important to apply Poli Glow in thin layers to avoid foaming, streaking, and wrinkling and ensure a shiny surface when dry, but it is also important to have enough total thickness of Poli Glow to last a while before reapplication will be needed. I just kept going until I ran out of daylight! Because it only takes a minute for Poli Glow to dry at normal working temperatures, you can keep recoating continuously without any drying time delay. I did heed the manufacturer's instruction to avoid applying Poli Glow to dark hulls in direct sunlight, and I suspect it would not have gone as well if I had tried to apply it in the sun. 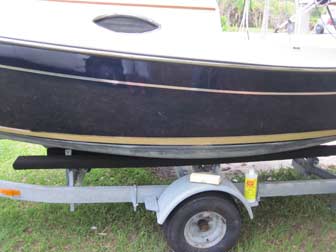 Poli Glow shine on the topsides after about 8-10 coats 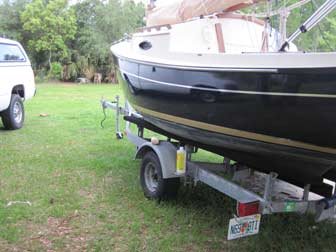 Truck reflected on side of boat

The Wily Conch is nice and shiny now, and looks as good as she did after I used the 3M Restorer & Wax. The Poli Prep and Poli Glow process took a bit longer than the one step compound/wax application, but was easier and more fun than working with the power buffer. It remains to be seen how well the shine will last, but I will update this page periodically with reports on longevity and reapplication of Poli Glow, unless I get tired of it and report on Poli Strip and going back to wax. If the Poli Glow experiment works out well for me, I may also try the new product from Poliglow Industries to protect non-skid boat decks, Poli Grit. 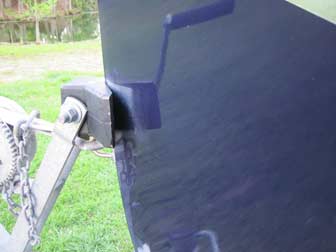 The most difficult part of the Poli Glow process for me was touching up small areas like this one around the trailer's rubber bow chock. The Poli Glow kit comes with a small chamois square for this purpose, but it is more prone to streaking and foaming than the large applicator block/sponge with chamois cover. I did the application in two stages, working first with the large applicator and then coming back with the touch up cloth, and in retrospect this was not the best or easiest way to do it. 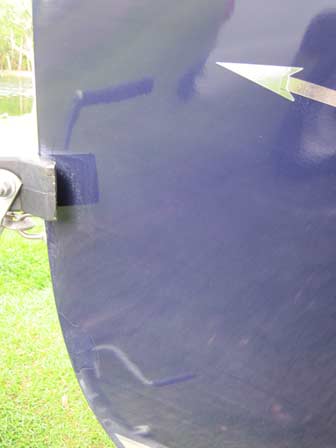 I had hoped to avoid cleaning the large applicator again, but found it is needed to touch up streaks and foaming from the small cloth. In the second picture (click to enlarge) you can see some of the streaking, which is easily smoothed over by another coat of Poli Glow in that area. Next time I will eliminate the whole problem by removing the rubber piece, but I wanted to test my ability to blend in a touch up in an oxidized area. The answer is that I can, but not very well. Perhaps a more experienced Poli Glow hand could have better results.